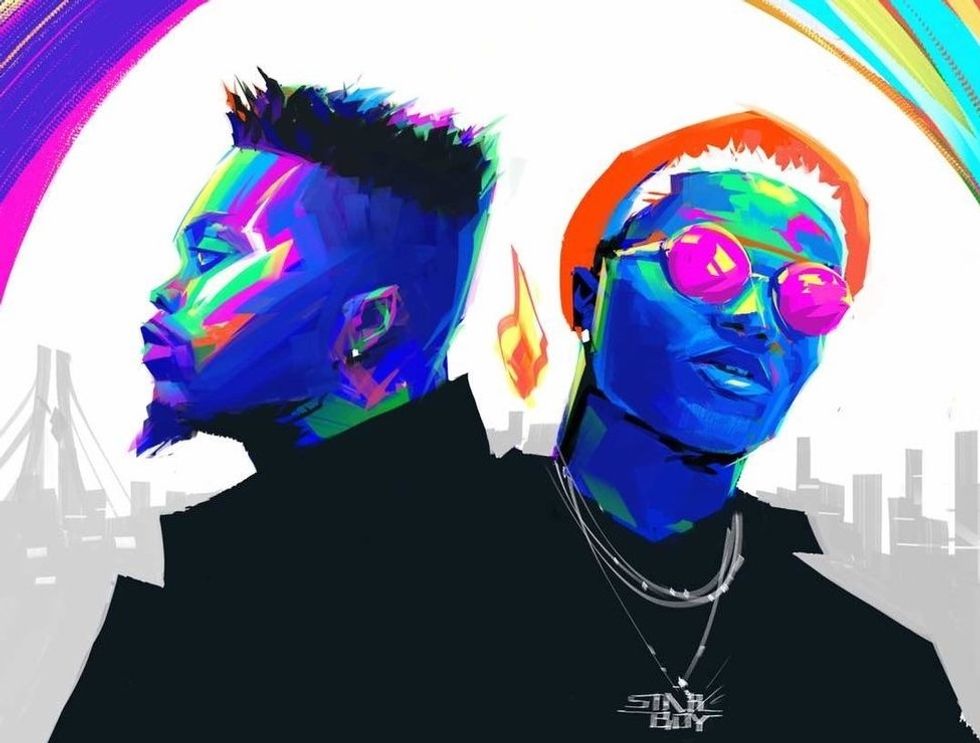 Naija afrobeats heavyweights Olamide and Wizkid link up once again on the breezy new single "Kana" produced by Mutay of Legendury Beatz. We get to hear Olamide flex his singing chops on the 3 and a half minute track as he and Wiz go back and forth about pampering the women they love in Yoruba. It's a light, mid-tempo cut that sets the perfect vibe for the oncoming warm weather.

Last year, Zakwe released "Sebentin," which was one of the best SA hip-hop songs of 2017. Since then he's been hyping up the remix, featuring some of the South Africa's best lyricists—Kwesta, Cassper Nyovest, Blaklez, HHP and Pro. The rapper released the song and, just like with every posse cut, hip-hop heads have been debating who had the better verse. HHP even admitted he had the weakest verse on the song.

Wande Coalhad an incredible 2017 with the massive success of "Iskaba," alongside DJ Tunez. The Nigerian star is now returning with "So Mi So," a new single that sees him link up with British-Ghanaian producer Juls, who's been dropping steady jams himself off his recent Ojekoo EP. Their new track, "So Mi So," is built on an addictive guitar riff and syncopated beat work that'll have you hooked. But, as always, it's Wande Coal's undeniable vocal delivery that seals the deal.

Read: 7 Songs That Prove Wande Coal Has The Best Voice in Nigerian Pop

S Wavey is one of the buzzing names coming out of the burgeoning Afro Bashment scene. The Brixton-based rapper recently dropped the addictive single "Wavey," which sees him link up with South London's rising afrobeats starMoleogoand Sneakbo, who's been his own jetski wave for a minute, for a song that could become the soundtrack to your summer.

Sun-El Musician ‘Africa To The World’

Tiwa Savage is back with another addictive drop, this time in the shape of "Tiwa's Vibe." The new single, produced by her frequent collaborator Spellz, builds on a solid beat to serve up what could be another feel-good, party starter. "Spellz is like family to me," Tiwa told us in an exclusive interview around her Sugarcane EP last year, "he's a brother to me, he's done records on my past albums."

South African-based Zimbabwean dancehall artist Buffalo Souljah is introducing a new style of music with his latest single "Wakasticka"—a style he calls GqomDancehall Music. Get into the thumping new single, which features DJ Cleo and Bizizi.

The music of Kamal Keila, known as "the James Brown or Fela Kuti of Sudan," gets re-released. Kamal Keila's new album, "Muslims & Christians" is a pleasant, welcomed dream presented in the unique form of Sudanese jazz. Released by Habibi Funk Records, Keila's album promotes the unity of a people who, for decades, have been led apart by completely different beliefs, while reciting the political history of Sudan at the same time. Once you get past its funky, soulful beats, you'll be uplifted by the message behind them.

With his latest album/mixtape, Outside,Burna Boyconfirmed his genre-straddling genius. The record followed the Nigerian artist as he "effortlessly dabbled in afropop, dancehall, R&B; and ragga, all with a tinge of the thumping bass prevalent in recent hip-hop releases," as our contributor Mayuyuka Kaunda wrote in our album review of Outside. Burna Boy now returns with the grainy and hazy music video for album highlight, "Devil In California," which was appropriately shot across Los Angeles.

Read our review of Burna Boy's Outside.

Cameroon's Stanley Enow is readying the drop of his second studio album. He rolls through with the record's lead single "Casanova."

Spoek Mathambo gets to trade bars with two young rappers, TSA and ByLwansta, on the song "Ten Fold" by TSA. Over a full customary off-key bassline, as heard on your favorite trap bangers, the three rappers spaz and let you know where their heads are at, with matching skills and bravado.

Follow OkayAfrica on Spotify and Apple Music to get immediate updates.