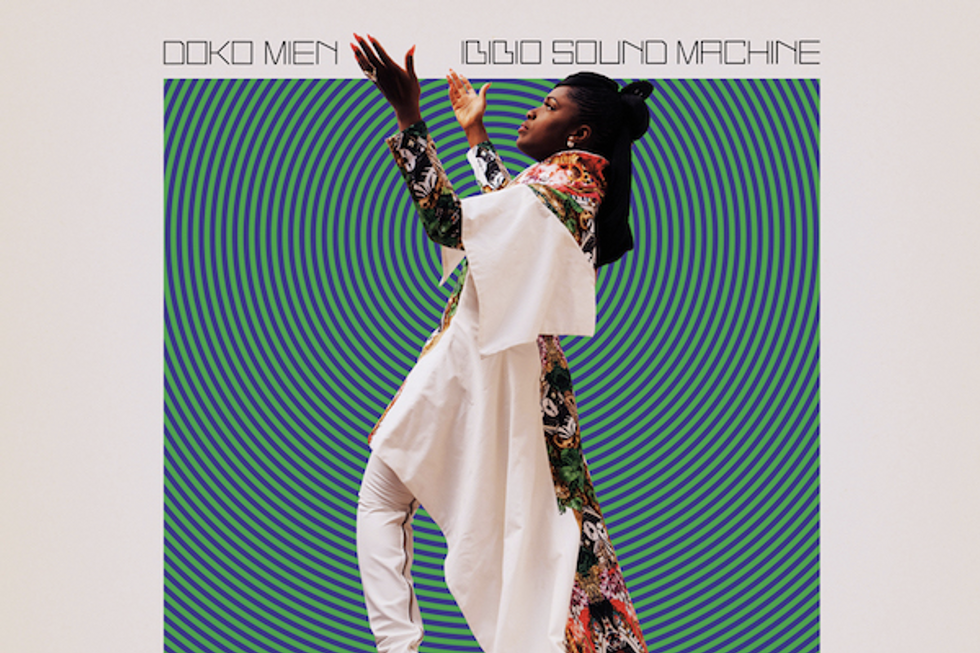 Ibibio Sound Machineare back with their latest album, Doko Mien. The UK-based group, fronted by Nigerian singer Eno Williams, expertly blend electronic sounds with West African influences, taking cues from '70s West African disco. They just dropped their latest single, "Wanna Come Down," which the band describes as an "infectious jam from the album that mixes disco, '80s electro with English and Ibibio language lyrics." Doko Mien, the title of the group's new album. means "tell me" in Ibibio.

Nigerian-American singer WurlD drops his new 9-song EP, Love Is Contagious. The new release, which is led by popular singles like "Show You Off" featuring Walshy Fire & Shizzi and "Contagious," sees the blue-haired WurlD blending elements of Nigerian juju music with pop and R&B;, making for a captivating and energetic fusion. "Love is Contagious is a conversation about love, from the infatuation stage to drowning in the emotion to the commitment stage," mentions WurlD.

South African lyricist YoungstaCPT's latest video is for the song "YAATIE," the latest single from his upcoming album 3T. By now, from listening to the autobiographical song, you should have gathered that Yaatie is YoungstaCPT's childhood nickname. The music video for "YAATIE" is fitting, as YoungstaCPT takes us back to his childhood. The video, which was directed by Imraam Christian, was shot in Wittebome, where YoungstaCPT (or should we say Yaatie) was raised.

Burna Boy teamed up with American producer duo DJDS to drop a newsurprise EP, Steel & Copper. The EP sees Burna Boy proving his unparalleled versatility once again as he raps and harmonizes throughout these four songs, showing he can hold his weight outside of his usual "afrofusion" sound as well. DJDS, who have previously worked with Kanye West on his Life of Pablo album, offer stuttering, bass-heavy production on the EP. Particularly on tracks like "Thugging" and the grime-leaning "34."

Rising South African rapper The Big Hash is about to drop his debut album, titled Young, in a few days. "Circles" is the latest song from Young to be made available as part of the album's pre-order/pre-save. "Circles" is just another instance where Hash's grandeur shines. The young artist exhibits adeptness in songwriting and structuring rhymes into effective patterns. The song is somber with a face-contorting bass line banging against mellow keys. He sings and raps melodically about an ex who's now acting brand new, when in actual fact, she's the one who lost.

TrapFunk&Alivio;are a Brazilian group coming out with some high-energy music built on influences from their home of Salvador, Bahia. The quartet—comprised of Dj Alle-x, Manno Lipe, Dj MG and Banha—collaborated with NY-based producer Kashakalast year on the 4-track Bota Kára EP, which blends favela funk influences with hip-hop and much more. "Take Me Away," one of the highlights from that EP, now gets this striking, glitchy new music video directed by Rafael Ramos, which follows the group to Amaralina beach.

Senegalese rap pioneer Nix comes through with the new music video for "The Ñuulest," a highlight from his EMW2: Excuse my Wolof 2: The Nuulest album, produced by Papi. The truly stunning new visuals for the single are both beautiful and ominous, taking viewers beachside and much more.

Benjamin Chapman returned to his home of Burundi to shoot this new self-directed music video for "African Love," the standout single from his I Love You MoreEP. The track pairs electric guitars with addictive melodies and vocal samples to make for a striking composition. "I really wanted to capture the heart of this gorgeous nation I call home for you all," the artist mentions, "Burundi is amazing, it's the Heart of Africa."

I Love You More EP is available now

Rick Jade, a duo made up of real life couple, the rapper Priddy Ugly and the dancer/TV and radio presenter Bontle Modiselle, just released their first music video together. The video for the song "Sumtin New" shows two couples at the beach enjoying each other's company—frolicking on the sand, taking a swim, racing, and doing all the good stuff couples who are truly in love can get down to. The song features the two's close friend KLY, and is taken from Rick Jade's 2-track debut EP titled I Want Something New. The EP was released on a fitting date—Valentine's Day.

Ugandan artist Jesse10s tells the story of being on tour and missing his lover in his latest single "Sunlight," which features production work from ChweziMadeIt. Get into this hazy, guitar-led tune below.

South African jazz/neou soul group Seba Kaapstad, who recently signed to Mello Music Group, have a new single. "Africa" is the follow-up to "Breathe," their debut single with the label released last month to announce the signing. While thematically "Breathe" was encouraging us to take pit stops during the rat race, "Africa" scrutinizes the duality of being proud and hopeful while coming into terms with the continent's weaknesses.

Peruzziconnects with one of the buzzing names of the year, 'Zanku' originatorZlatan, for this brand new track, "Bayi Bayi." The DMW artist enlists some production from Northboi for this addictive new dance floor jam.