The 19 Songs You Need to Hear This Week 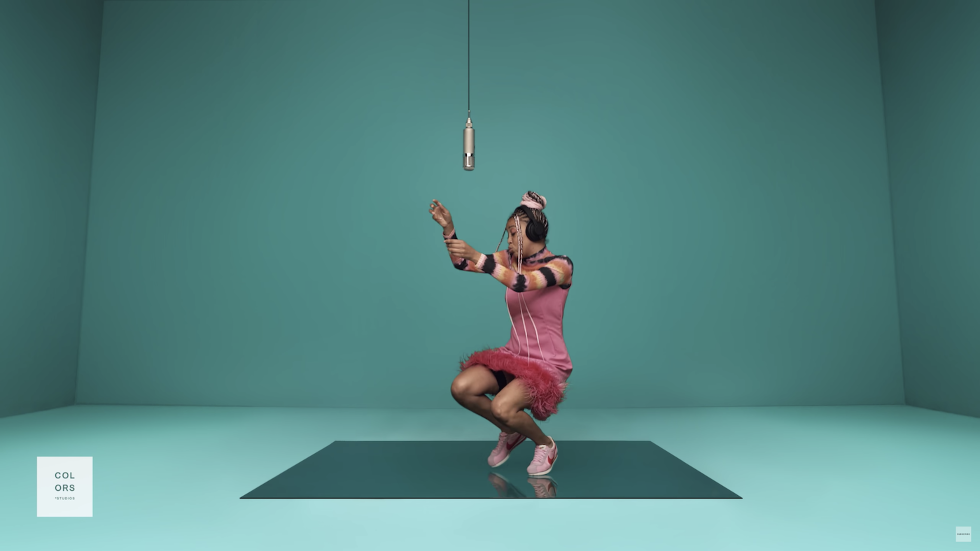 South African hip-hop/pop artist Sho Madjozi stopped by the A COLORS SHOW studios in Berlin, Germany. In front of a turquoise backdrop, the artist performed her new song "John Cena." She slid through the performance with the customary vigor that is now synonymous to the artist. Obeying the gqom beat's orders, Madjozi gyrated, showing off her personality and light footedness (she even did the infamous vosho dance).

Burna Boy links up with British singer Jorja Smith once again, for her new single "Be Honest," the first since the release of her memorable debut album Lost & Found.The sultry, afropop-inspired track sees Smith singing cheekily about a lover atop rhythmic production. On "Be Honest," the artist is experimenting with a more upbeat and percussion-heavy sound. Burna Boy joins in on the song's third verse, offering his Pidgin and Patios-tinged flow.

Popular Ghanaian MC artist Fuse ODG is back with a new music video for his collaborative record "Cool Down." The track features several rappers including Olamide, Flava, Joey B and Kwamz—who all take turns to deliver their own freestyles atop the song's salsa-inspired production. For the music video, the artist took a creative approach, launching the #SelfieCypherChallenge, using vertical, self-recorded clips of each artist living their best lives as they perform their verses.

YoungstaCPT has just released yet another single off of his debut album 3T. "Old Kaapie," produced by the super producer trio Ganja Beats, has just been treated to visuals to highlight it. "Old Kaapie" sends a message of encouragement to Coloured people to shed off the stereotypes placed on them by society, and take over the world. As YoungstaCPT raps on the first verse: "This is something that you need to hear aloud/ Brown mense, the world is ours/ But those in power never will allow"

Sarkodie 'Do You' ft. Mr Eazi

Ghanaian heavyweight Sarkodie teams up with Mr Eazi on this new single "Do You." This is the third single in his upcoming album campaign due later in the year.

Santi has taken his already memorable music video offerings to another level, releasing a short film as the music video for his latest single 'Raw Dinner," featuring Kida Kudz from his debut album Mandy and the Jungle. Constantly drawing inspiration from the Nollywood horror films of the '90s—which he also referenced heavily in the video for last year's "Freaky"—the artist produced an 8-minute short with dark and stunning imagery.

Rae Sremmurd's Swae Lee drops two new singles today, "Won't Be Late" featuring Drake and "Sextasy." "Won't Be Late" is notably produced by Nigeria's own Tekno. The new single is built on a mid tempo, afro-fusion-inspired beat, filled with claps, and light keyboard chords. As well as production, Tekno also gets a writing credit on the new song. You can hear his input when Drake sings lines like, 'Ikebe, pressing on me heavy' and 'Bakasi, moving on me wassy.'

Lazarus is a rising artist from Malawi who's fighting for social change for people with albinism in his country, and across Africa. He just released his debut album, Stomp On The Devil, which blends traditional Malawian styles with modern folk, all shaped by Lazarus' past as a street musician. The new music video for "Moyo Wanga" released alongside Extinction Rebellion. The video, directed by Johan Hugo, follows Lazarus as he performs at home in Malawi, as well as across New York City, through rotoscoped footage.

Nonso Amadiis a Toronto-based musician cooking up his own blend of afro-fusion by mixing influences from his Nigerian background with elements of RnB, soul, pop and much more. The 23-year-old artist just dropped his latest release, Free, a 6-song EP which features appearances from Mr Eazi on the memorable lead single "Go Outside."

Rising Nigerian artist Tems shares the visuals for her addictive new single, "Try Me," The new video, directed by Demola Falomo and produced by Ladder, Lex and Booker, tells a story of a band of misfits held against their will for being different to the norm.

Mr Eazi, Skales and pioneering Nigerian DJ Jimmy Jatt have linked up for a new track to close out the summer. "Halima" opens with Mr Eazi delivering passionately sung lyrics about the woman of his dreams. He also provide's the song's catchy chorus. Fellow Nigerian artist Skales joins in on the second verse, matching Mr Eazi's passionate energy for his lover. The track was produced by none other that Guilty Beatz.

Amadou & Mariam + The Blind Boys of Alabama 'Bamako to Birmingham'

Yemi Alade is readying the release of her forthcoming studio album Woman of Steel. Ahead of that, the Nigerian star has shared to new singles, "Home" and "Give Dem," as well as cover art and tracklist. "Home" is the album's opening track, which features fuji-inspired production by Vtek. The song sees her her delivering strong vocals as she sings about being "at home" with her lover. "Give Dem," is a more upbeat offering, produced by Krizbeatz that sees the artist sharing swaggering lines atop a fiery, danceable beat.

Ethiopian-American Ras Nebyu, a member of the Washington Slizzards collective, drops his latest visual for "Days Later" from his Uptown Lion Walkin LP. The new music video was shot throughout various parts of Ethiopia.

Priddy Ugly and Bontle Modiselle, known collectively as Rick Jade, made an announcement of their pregnancy today. The couple has been together for a decade, too. To make their anniversary celebration and pregnancy announcement even more special, the duo released a video for a new single titled "Bonita." The video was shot in an art gallery by Priddy Ugly's regular video director, Nkululeko Lebambo aka Armsdeal (of CideFX Films).

K.O and Nandi Madida follow-up their 2014 smash hit "Skhanda Love" with "Say U Will." The song features Nandi's spacious vocals and K.O's swaggering rhymes, just like the previous one. "Say U Will" is a song about lovers surrendering and promising to be there for each other.

Stiff Pap is a duo from Cape Town consisting of the producer Jakinda and the rapper Ayema Problem. With their latest EP titled Stiff Pap Radio, the group take a leap forward. Their debut EP Based on a Qho Story, was lean in nature owing to the overt gqom influence on the project. On Stiff Pap Radio, however, Jakinda intensifies their production and Ayema Problem's writing goes further than the fun raps.

If you've been following the ATM (African Trap Movement) gang closely, then you know a joint project from three of its members—Just G, Ranks ATM and Sims—has been a long time in the making. 3 Way is a 10-track mixtape consisting of songs performed by the trio collectively, including the lead single "M.I.A," which has been out for a few months. The only guests on the project are two of ATM's founding membersEmtee and Saudi, who appear on the songs "Where Would I Be" and "Silent Night."