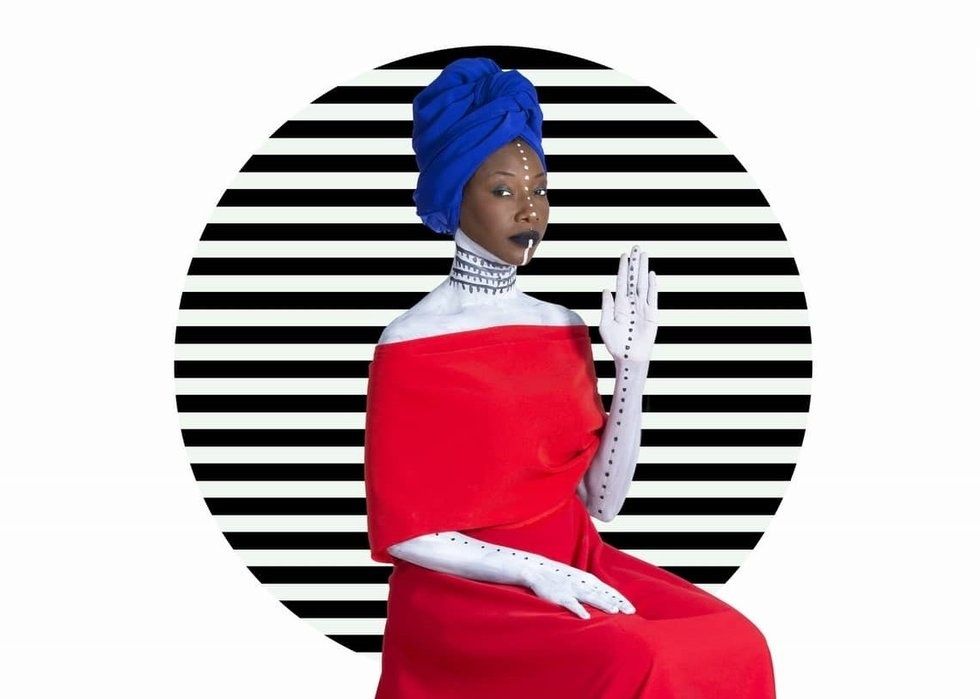 Burna Boy is back with his first single since the release of his well-received sophomore album Outside, and he doesn't disappoint. Fresh of the heels of his standout collaboration with Major Lazer, The Nigerian 'afro-fusion' musician brings the literal heat on his latest banger "Gbona," which is the Yoruba word for "hot." "Oluwa Burna mo gbona feli," he sings throughout the boisterous 3-minute track.

Kenya's Blinky Billis gearing up for the release of his long-awaited album, Everyone's Just Winging It And Other Fly Tales, due October 19. The new solo record will see the former Just A Band member delivering 12 self-produced tracks that are as diverse and rich as the contemporary Nairobi scene. One of those album highlights is "Showdown," a hypnotic new single that pairs traditional Kenyan percussion with head-nodding bass synths. The song sees Blinky Bill linking up with new Nairobi acts MVROE of EA Wave and Kiwango of Cosmic Homies.

Mali's Fatoumata Diawara has shared the new music video for "Bonya," one of the highlights from her new album Fenfo. Diawara mentions that "'Bonya' means respect. This is the most important value that we need to cultivate. I feel like a universal Mother, so I do not worry only for myself, I also worry for our children. They are the adults of the future. The message of the video is that with respect we can solve most of our differences and give back the same."

Read our interview with Fatoumata Diawara

Up-and-coming South African hip-hop artist J Molley is onto something. The singer/rapper is mean with the pen and has an ear for beats which allow his ethereal digitally enhanced vocals to feel at home. His latest EP/playlist, aptly titled Leader of the Wave, builds upon where songs like "200 On MY Wrist," "Dreams Money Can Buy" and "Seven Bottles" left off. J Molley has managed to build a solid fanbase online, amassing hundreds of thousands of SoundCloud plays. He is at the forefront of the new wave of South African hip-hop.

On Nigeria's Independence Day, Wizkid released two singles, which are his first this year. The first single, titled "Fever," is built on breezy pads, while a saxophone by Tosin makes it even wider and richer. The song is produced by Blaq Jerzee. n the second single, "Master Groove," which leans towards dancehall and is produced by Phantom, Wiz summons his girl to the dancefloor over a prominent guitar riff.

South African rapper L-Tido dropped a new album today, titled 16. The project is his first in five years (his sophomore All of Me came out in 2013). 16 is undoubtedly Tido's most introspective album to date. While on All of Me, the MC had a few personal songs, like "Problems" and "Unbreakable," on 16, he has more of those types of songs, in which he's speaking about issues that have been in his mind.

Wanja Wohoro is a Kenyan singer, songwriter and multi-instrumentalist who captivates audiences with her "Afro Indie Soul" style, soulful vocals and emotionally-rich lyricism. The rising talent just dropped Matriarch, a 9-track album that explores the journey of contemporary womanhood through a personal lens. "MATRIARCH takes the listener through Kenyan folklore, the turmoil of youth and lust, the anxiety of discovering one's place as a young woman, and the dream of one day becoming a leader," she mentions.

Swiss born Sudanese-Eritrean sisters, Jasmina and Nabyla Serag and their band, Sirens of Lesbos, are back with a highly-addictive track, "Shotgun." The single reworks lyrics from the Fugees' "Fu Gee La," one of the band's favorite tracks, as well as parts The Miseducation of Lauryn Hill.

Read our past premiere of Sirens of Lesbos "We'll Be Fine"

Paul Okoye (aka Rudeboy)has been doing his thing on the solo side of things since his split last year with his brother and musical partner Peter Okoye—the other half of their band P-Square. Rudeboy returns with a another single, this time enlisting the help of fellow Nigerian artist Patoranking, for the dancehall-infused "Together," that sees the Rudeboy singing passionately about an everlasting love. "Anyhow wey you like make e be/We go stay together, forever," he sings.

One thing you should know by now is that The Wrecking Crew don't sleep. The Pretoria hip-hop collective releases so much music it's hard to keep up. In July, A-Reece, Wordz and Ecco released the masterpiece L3 (Long Lost Letters). Last month, MashBeatz released an album titled Thanks for Nothing. This week, A-Reece releases the song "Amber Rose," which is accompanied by a music video. "Amber Rose" is a mellow tune that leads with moody organ keys. The song lasts for just above a minute, and sees Reece spit some sexually charged raps and give a shout to his crew.

Nigerian artist Larry Gaaga has shared the music video for his collaborative single "Baba Nla" featuring afrobeats titians Burna Boy, D'Banj, and 2Baba which dropped back in August. The smooth song gets a smoky visual featuring the four artists as they perform their respective parts. Burna Boy leads the pack with a catchy opening verse before 2 Baba, Larry Gaaga and D'Banj join in afterwards all clad in sharp black ensembles. Of course the video wouldn't be complete without a performance from a group of sultry dancers decked in face paint and ankara.