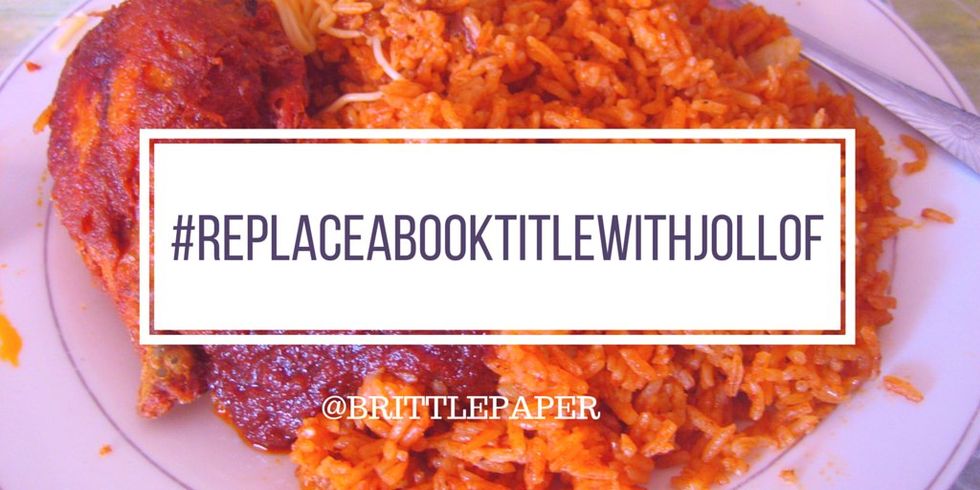 Brittle Paper, a go-to blog for all things contemporary African literature, asked followers on Twitter to #ReplaceABookTitleWithJollof Thursday, which prompted blerds to work jollof into famous book titles such as There Was a Country by Chinua Achebe and Chimamanda Ngozi Adichie’s We Should All Be Feminists.

I'll be retweeting the best titles of the #ReplaceABookTitleWithJollof hashtag, so tag @brittlepaper when you post! pic.twitter.com/BUklO0odvl

The exercise is especially timely considering Sister Deborah’s ultimate jollof anthem dropped last month, which aimed to claim victory for Ghana in the ongoing #JollofWars among Nigeria, Senegal and Cameroon.

Nigerian founder and curator of Brittle Paper, also a doctoral degree holder of English at Duke University, Ainehi Edoro, who recently penned thought-provoking article “Beyoncé is not shining a light on African literature – it's the other way round,” retweeted the cleverest literary reimaginings. Although she credits Nnanna Esther Nne as the mastermind. Take a look:

One Day I Will Write About This Jollof #ReplaceBookTitleWithJollof @brittlepaper

Ha! So they really did start #ReplaceABookTitleWithJollof? ? Good to know Nigerians can learn a thing or two from us Kenyans.

We’d love to know how you’d work Jollof into African lit book titles. Tag us at @okayafrica on Twitter.