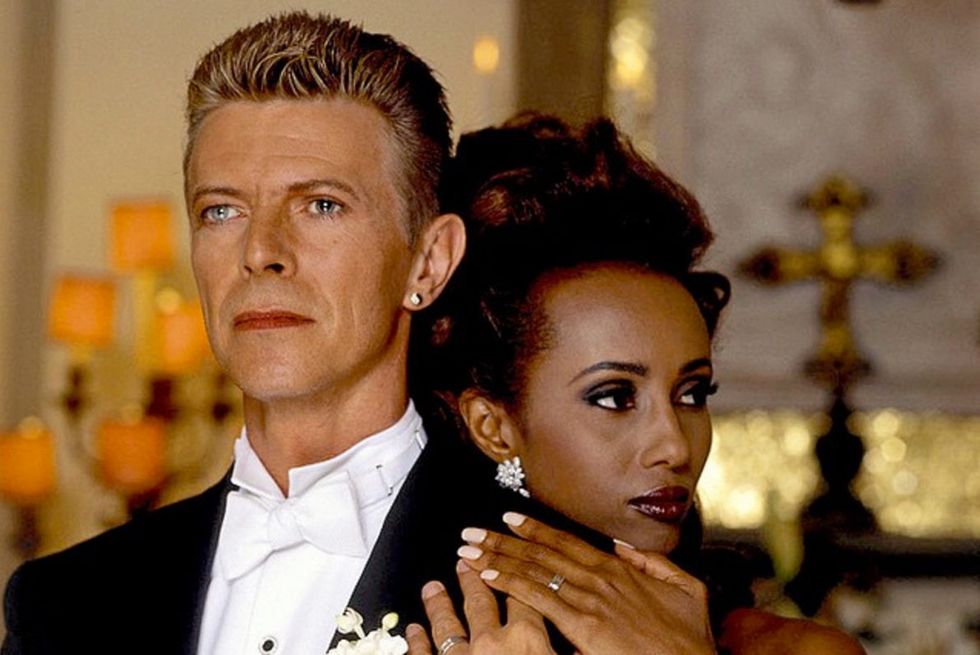 As a girl, Dina Nur saw Iman and David Bowie's relationship as a license to break free of the bonds of Somali female identity.

It’s been a while since I thought about the relationship between pop-music-legend David Bowie and the Somali-born supermodel, Iman. With Bowie’s untimely death dominating our cultural psyche, I’m increasingly aware of the deep impact their relationship had on me from a very young age. While most people applaud his prodigious artistic contribution, as a half Somali woman, his relationship with Iman is what left the greatest mark on me.

For many Somalis in the diaspora, Iman was our link to Bowie, and in true Somali fashion, the fact that he married one of our ‘daughters’, automatically made him family. The day of the announcement of Bowie’s passing, several Somalis expressed this sentiment on social media:

“We Somalis adore David Bowie," Suban Nur Cooley said in a Facebook post. "My dumashi* Iman made us feel like we were somehow distantly connected to him. This loss is felt. We will miss you, walaalo**.”

"As a Somali, I always felt like David Bowie was family, kind of like a super cool uncle or in law since he was married to Iman, and no one could tell me anything different. RIP Uncle David," tweeted Idil Ibrahim.

Since Bowie’s passing, I’ve thought a lot about how their relationship impacted me as a child. Yes, like Iman, I am the daughter of a diplomat who also lived in Kenya in my formative years, but that wasn’t it. It went even deeper. Iman’s relationship with David Bowie didn’t just inspire kinship like it did to most Somalis, it made me feel closer to the unconventional.

Living in Nairobi, Kenya as a teenager, there wasn’t access to the luxuries of subcultures and exposure to alternative underground expressions in the way they exist in the West. When David and Iman announced their marriage, I not only saw that another world existed but that, by way of Iman, it wasn’t far removed from me.

Their union somehow normalized what was deemed eccentric and, in many Somalis’ eyes, simply gauche. If a woman like Iman could be with a man like David Bowie, then there must be a person behind the persona. I was finally able to differentiate between the artist and the man and no longer made a correlation between the unorthodox characters he presented to the world and who he was as a person. I understood that presentation did not equate to moral esteem. Being raised among cultures that judge heavily on appearance and encourage conformity in one’s mind and demeanor, this realization turned my worldview inside out. It marked the inception of an understanding, something found backstage, behind the curtains. I recognized, at that moment, how most great artists that are perceived as either unconventional or outlandish, can contain a level of genius, a unique mind in its own right.

In order to understand the magnitude of that realization, it is imperative to place it within the context of decency within Somali culture. I have tried and failed numerous times to explain to friends in the United States the subtleties of this culture, and the limitation and difficulties of maneuvering through them as a Somali woman in the West.

Simply through the choice to pursue modeling, Iman broke through what was deemed as 'appropriate' by Somali conventions. In the West, modeling is a glorified profession, in Somalia it is heavily frowned upon. Iman herself has stated that when she first told her father of her modeling career, he equated it to prostitution, although he eventually accepted it.

What is truly phenomenal about Iman is that she managed to reconcile two opposing cultures. Yes, it’s the tale of every immigrant in a foreign land, but only those who originate from a culture similar to that of Somalia will truly understand the added layer of complexity.

Cultural figures like Iman are part of a larger framework of icons and movements in American popular culture that expand the definition of what it is to be black. The recent movie Dope, the Afropunk Festival in Brooklyn, the television show Awkward Black Girl, and comedian turned Daily Show host Trevor Noah, are all current examples that contribute to the varied representation of black experiences in the media. Their presence is creating a multidimensional identity that provides this generation’s youth with role models that more closely resemble themselves and challenge the status quo.

Dina Nur is a Sudanese/Somali artist raised in Paris and Nairobi. She is currently living in the Sierra Foothills in California by way of New York City. Follow her on Instagram @dina_nur_