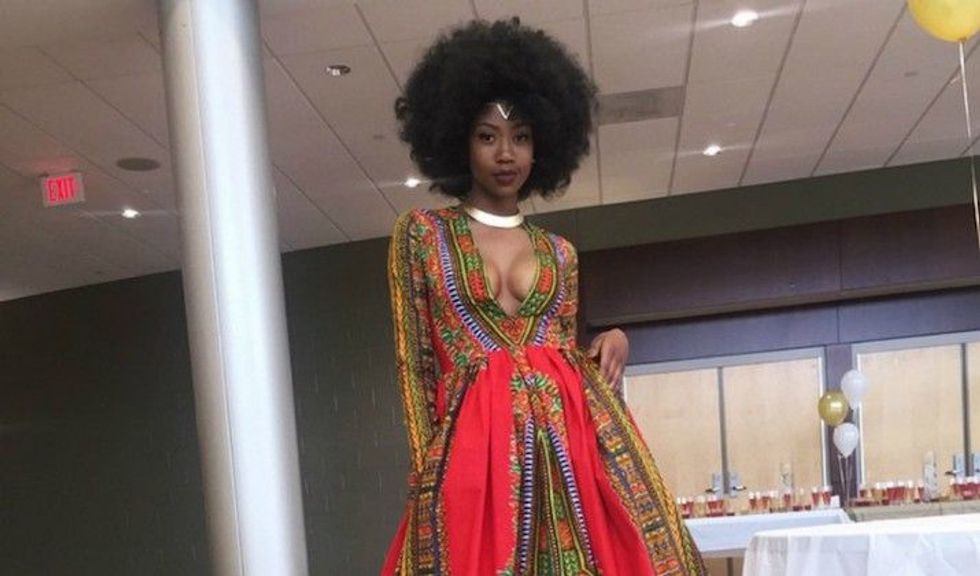 Kyemah McEntyre, the young designer whose handmade prom dress broke the Internet in 2015, will be showcasing her collection during New York Fashion Week.

You might remember Kyemah McEntyre from back in 2015, when photos of her in her elegant, one of a kind dashiki-print prom dress broke the Internet.

Her dress was the highlight of the year's prom season, and news that, the then, 18-year-old student had designed it herself made the dress all the more astonishing.

Here's the awe-inspiring dress in case you somehow managed to forget:

As an artist I have a completely different point of view compared to most individuals. I am extremely analytical and observant. Throughout the world, we have people who do not notice each others essence and humanity. We Stunt our collective spiritual growth by allowing assumptions and stereotypes to cloud our mind and thus our physical reality. We let these negative ideas get the best of us, and in turn a world of isolation is manifested by our lack of sensitivity and desire to sympathize with each other. This results in a world in which people live within the confines of their own space, isolated from each other and separated from the rest of the world. Sometimes we get trapped in our own prejudice ways. We don't notice how the idea of a particular type of person changes the way we live our lives. The most creative people are the ones who step out of their comfort zone and take advantage of the world around them. My abilities as an artist allows me to experience the benefits that versatility fosters. Being exposed to all kinds of people and cultures is the muse for my artwork. I am an aspiring artist who is very passionate about the connection between art and the world. I believe that in order for society to gain a wider horizon, we have to be willing to acknowledge other people from differences, beliefs, morals, and values. #kyebreaktheinternet I love you guys, because of you all I continue to keep pushing no matter the circumstance. Let's try this again ✊???

Kyemah's been designing her unique style of African-inspired garments ever since. She was admitted to the prestigious Parson's School of Design (she created a dress out of braiding hair for a final project, y'all!), she designed another dashiki-styled red carpet gown for a celebrity client, and she appeared in a number of publications as part of Dove's natural hair campaign, Konbini reports.

My professor told me I was "extremely expressive". Duhhh. That's the way it's always been. Model :Kye Designer :Kye Photographer : @leesythooo

First day back at Parsons. May my ancestors be with me. ?????? pic.twitter.com/e9P7fJdBvF

As if all of that wasn't impressive enough, she's now— at the age of 19—set to have her very first collection displayed during New York Fashion Week. Her designs will showcase "at the Harlem Fashion Week Runway Show on February 12, 2017 at 9:30 PM at the Museum of the City of New York," reports New York Fashion Week Live. "A portion of the proceeds from HFW will go to the restoration project of La Maison des Esclaves (The House of Slaves Museum on Goree Island in Senegal).”

Kyemah is clearly a fashion icon in the making.

Rare photo of me in my element, working on a piece that will come storming down the runway February 12th at 9:30 pm. Tap the link in my bio for tickets !!! @leesythooo thanks babe for capturing this ?#DontGiveUpOnYourDream