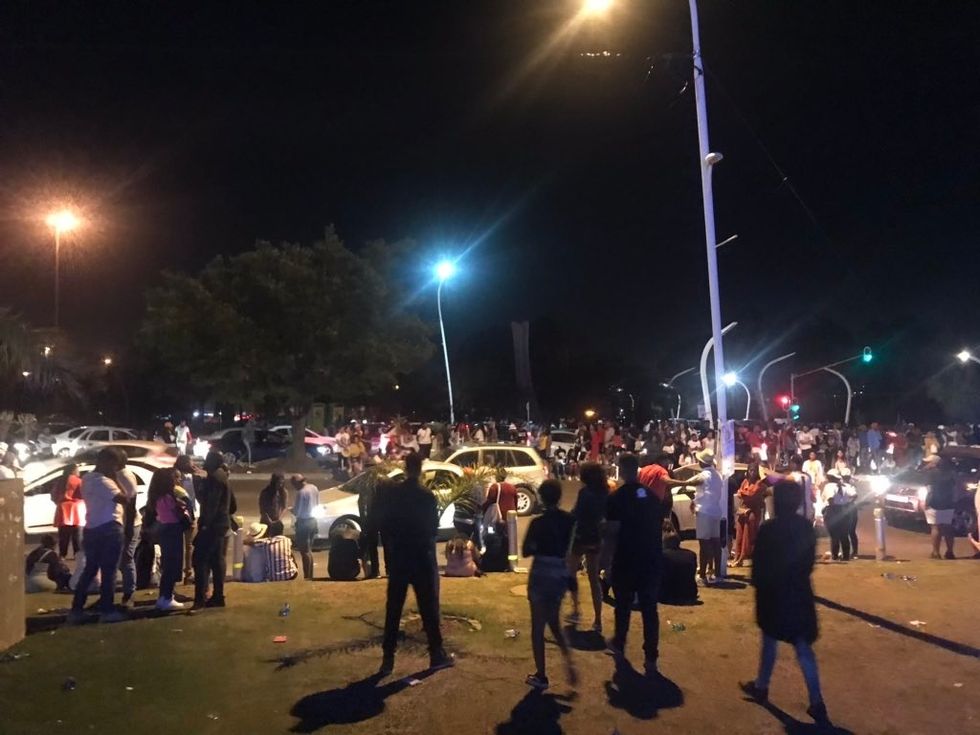 Many took to Twitter to share stories of being attacked while waiting at a nearby garage while police did nothing.

It began as a joyous night in Johannesburg on Sunday as thousands of people gathered for the Global Citizen Festival, headlined by Beyoncé. Unfortunately for some, however, the night ended on a much darker note.

Various attendees took to Twitter following last night's show to share harrowing stories about their attempts to make it home. Many shared similar experiences of being stranded at the nearby Sasol garage where they were taunted and subject to crime.

Several attendees that were waiting on Uber rides were told that they were unavailable due to the high volume of customers at the time. This led one Twitter user by the name of Imaanto wait at the garage, where she witnessed a series of disturbing events including robberies, tasering, an attempted kidnapping and gun shots being fired. She says that police failed to intervene.

"I am disgusted, terrified and shaken from what happened. I'm sharing this because I don't think it will make headlines. Ironically, the concert was about ending poverty and seeking JUSTICE," she wrote on Twitter. "There was nothing just about tonight."

Several others have shared similar stories. Another Twitter user,@wittnsass, said she witnessed several fights breakout while waiting at Sasol garage, adding that those carrying out crimes preyed on the collective fear of the large crowd that had been stranded there.

Another young woman, claimed to have been mugged and forced to fight off her attackers on her own. Others shared similar experiences, highlighting the absence of police.

#GlobaCitizenFestivalSA so heart broke by what was happening at sasol garage and outside the stadium I even tripped… https://t.co/NBMcvcXld8
— Anele (@Anele) 1543799187.0

I know it was a good show. But I can barely remember it through all the trauma of trying to get home. #GlobalCitizensFestivalSA
— ZANEMVULA (@ZANEMVULA) 1543839133.0

CEO of Stadium Management South Africa Jacques Grobbelaar, told Times Live South Africathat the South African Police Service (SAPS) and Glolbal Citizen were responsible for security at the event, but SAPS did not follow the usual protocol. "I was at the venue... police cleared out after the last performance. Usually we would stay for two hours after the event to ensure the safety and security of concert-goers."

Global Citizen released a statement last night addressing the events. "After such an inspiring evening, we are saddened to hear the challenges people had while leaving the venue," the organization wrote. "We have been working to support people getting home safely."

They shared another on Monday Morning, stating that "the safety of our guests is always of paramount importance to us and we understand and strongly empathise with their hurt and anger," and urging victims to file police reports with the South African Police Service.

Global Citizen and the House of Mandela are deeply disturbed by the reports of criminal activities against festival… https://t.co/g5JMF7TftK
— Global Citizen (@Global Citizen) 1543839661.0

The safety of our guests is always of paramount importance to us and we understand and strongly empathise with their hurt and anger. 2/3
— Global Citizen (@Global Citizen) 1543839662.0

People who were at Sasol Garage after Global Citizen, can we please find each other and have a support group.
— mfaz’omnyama. (@mfaz’omnyama.) 1543796309.0