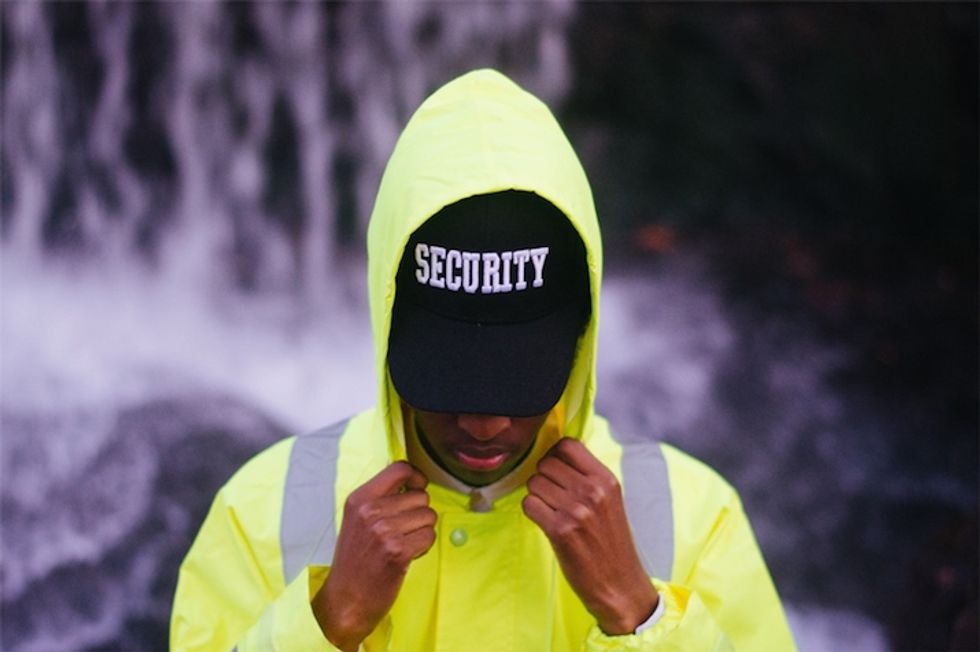 Gate Keepers is a two-part "paradoxical photo series" collaboration from South African fashion students and photomakers Bambatha Jones, l.e.b.o and Size Mbiza. Featuring models dressed in the functional attire often associated with what the photographers refer to as blue collar citizens in South Africa, the shadowy photos intend to comment on the impact that "cultural gatekeepers," like Ian Connor, Kanye West, and the ASAP Mob, have on youth culture across the globe.

For this new series, the Johannesburg-based trio re-imagined security guards as the tastemakers of global youth culture. "We've made use of clothing pieces that are not necessarily 'fashionable' in South Africa," Jones told us over email. "We deliberately chose the uniform of a security guard and fused it with sports-luxe elements to question the existence of tastemakers in society. Do culture influencers help consumers purchase the correct products on the market or are they just mere walking advertisements of leading brands? The sequel of the story taps into current macro-trends and is extended as the night-shift of the gatekeeper."

Read a detailed statement on the Gate Keepers series below. For more, head to Bambatha Jones' Tumblr.

For many years, popular youth culture has thrived by means of various consumers subscribing to specific lifestyles that see them identify themselves within specific subcultures or style tribes. Subsequently, in this very day and age we are often bombarded with tons of information, let alone products in the market which all seem perfectly reliable and most sustainable. Culture influencers often find a way to filter the overflow of information and resources intended for consumers to make belonging easier for the individual.

“Gatekeepers” is a paradox photographic series collaboratively shot, directed and post produced by friends Bambatha Jones, l.e.b.o and Size Mbiza. The sequence comments on the influence that taste makers have in the pre-selection and opinion of fashion items within pop culture. Its paradoxical nature comes in the form of a location “fashion editorial” which has models dressed in functional clothing pieces which are often associated with blue collar South African citizens. Inherently this makes cultural gatekeepers security guards who look out for new trends that are then trickled up or down.

As a result, “cool” goes through inspection and approval comes in the form of an instagram post, or articles that confirm specific trends as stylish, making reference to these tastemakers (this is also known as the co-sign). But does this mean that society loses a lot of cultural diversity or is cultural gatekeeping just the work of a lower class citizen?