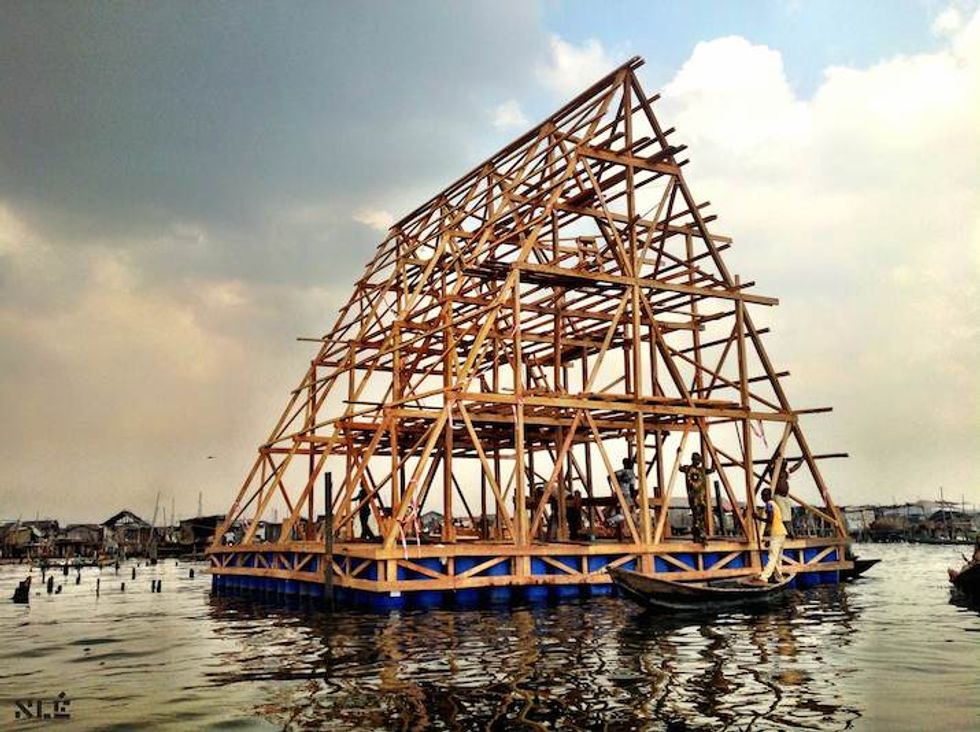 All photos provided by Al Jazeera

The Makoko Floating School, a multifunctional schoolhouse and community center located in the Lagos waterfront settlement of Makoko, is the brainchild of Kunlé Adeyemi. The Nigerian architect and urbanist set out to create the floating structure as a solution to overcrowded living conditions, seasonal infrastructural damage from tidal flooding, and the recurring state-sanctioned demolitions frequently experienced by the community's residents under the guise of progressive development. In June 2012, Makoko's population of almost 86,000 was given 72 hours to evacuate their homes by the Nigerian federal government with no offer of compensation or transient housing made to residents. Such forceful evictions--often executed without warning--are indicative of the larger social justice and human rights violations carried out by government officials who seek to capitalize on prime waterfront property with no regard for the lives and livelihoods of those who call these coastal communities home.

Though the Makoko Floating School was initially classified as an illegal structure by government authorities, the decision was rescinded soon after Adeyemi and his project were nominated for the prestigious Design Of The Year award from London's Design Museum. An exercise in human ingenuity, Adeyemi's prototype is buoyed by floating barrels and locally sourced materials making it an inexpensive, sustainable and easy-to-build structure that has the potential to be implemented in a myriad of waterfront communities the world over. The vision behind Adeyemi's groundbreaking architectural activism is a simple one: to develop an ecologically friendly urban blueprint that would bridge the infrastructural gaps of shoreline settlements in the global south while appeasing government needs for modern and attractive tourist hubs.

Adeyemi's vision will be featured as part of Al Jazeera English's forthcoming documentary series Rebel Architecture, premiering August 18th. The six-episode television series aims to put a spotlight on architects from around the world "who are shunning the glamour of ‘starchitecture’ and using design to tackle the world’s urban, environmental and social crises," according to an official press release. Adeyemi's episode, titled Working on Water, will focus primarily on his efforts with the floating school in Makoko as well as his involvement in the development and construction of a floating radio station in the Chicoco waterfront settlement of Port Harcourt, whose residents have also seen their homes and histories razed down by bulldozers time and again. Directed by South African filmmaker Riaan Hendricks (The Devil's Lair), Working on Water is scheduled to air on September 15th.

Other individuals and projects profiled in the series include the guerrilla architecture of Santiago Cirugeda in Spain; Yasmeen Lari's disaster relief shelters in Pakistan; and Brazil’s Ricardo de Olivera, a self-taught architect who has constructed over 150 houses in his hometown of Rocinha. Learn more about the Makoko Floating School here.