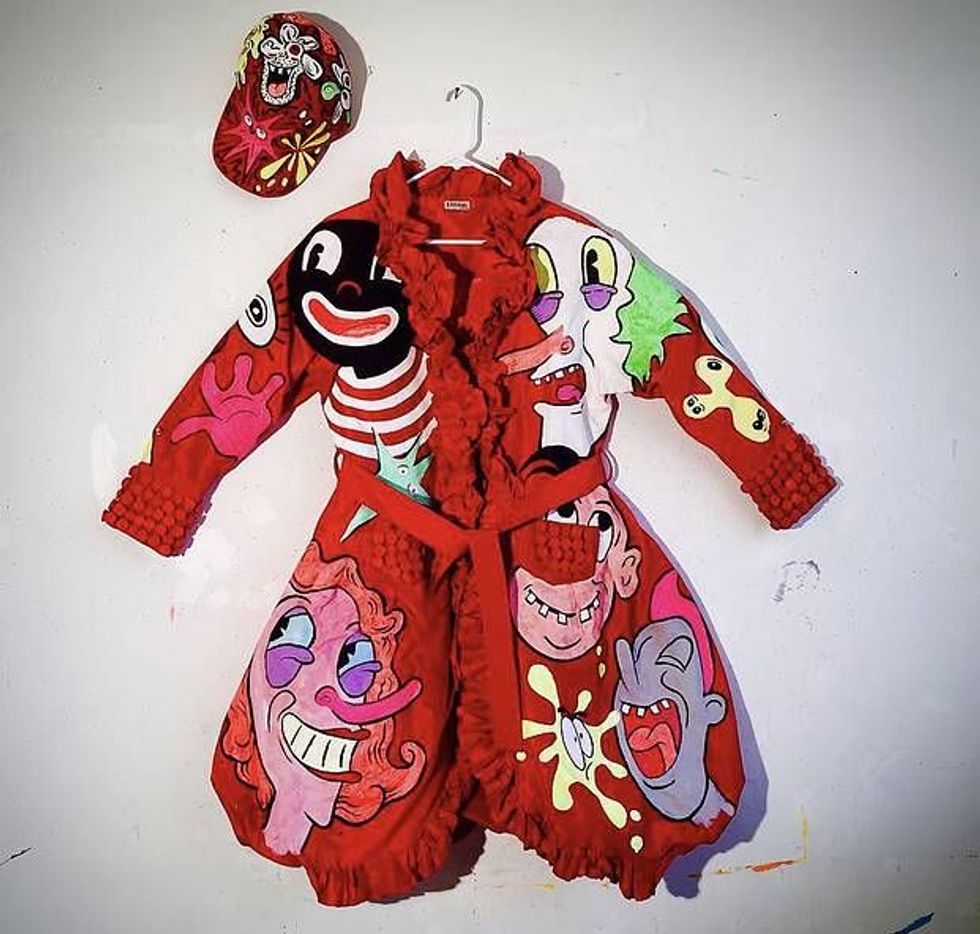 Roc Nation signee Young Paris had to school Patricia Field and Suzan Pitt as to why golliwoggs are a no go in fashion, art and in life.

New York Fashion Week is usually characterized by frazzled editors, late night after parties and the rampant overuse of the word “chic.” What it’s not known for is creating a maelstrom in which a staunchly pro-melanin recording artist goes toe-to-toe with an iconic costume designer.

Yet that’s exactly what happened when Roc Nation signee Young Paris caught wind of a coat that was set to be sold in curator and costume designer Patricia Field’sMADE F.Y.I. pop-up. Field is often most recognized for being the style guru behind cult television series Sex and the City. The temporary shop launched yesterday and came on the heels of the designer’s first runway-to-rack show, which saw many of the collection’s exclusive pieces available for immediate purchase at the pop-up.

Also available to avid shoppers was a cartoon-motif coat designed by painter and animator Suzan Pitt. A respected artist in her own right, Pitt’s films have been featured at Sundance, the Museum of Modern Art and more. Outside of her film projects Pitt, who is known for hyper-sexualized representations in her work, often uses clothing as a canvas for her drawings. She has also acquired quite the fashion following with her one-of-a-kind garments. This time around, Field, who already sells Pitt’s creation via her online store, decided to put the artist’s “Margie” coat and hat set in the pop-up. The extremely limited piece features various cartoon characters, including an illustration that looks almost identical to a fictional being known as the golliwogg.

The golliwogg was a creation of New York-born writer and illustrator Florence Kate Upton. Though it is now largely acknowledged as an anti-black, racist caricature, when Upton published her first children’s book, The Adventures of Two Dutch Dolls and a Golliwogg, in 1895, it was met with great commercial success. As the title indicates, the book’s two main protagonists are Caucasian dolls while the golliwogg, who is initially described as “horrid” and “the blackest gnome,” turns out to be a friendly individual who becomes a foil of sorts to the Dutch dolls. Upton’s portrayal of the golliwog relied heavily on traditions of black minstrelsy: the character’s bulbous eyes, jet-black skin and unruly shock of hair contrast sharply against the formal suit and bowtie he wears, and his position as a foil often sees him portrayed as a fool to the smarter, braver, white dolls.

In the context of traditions of blackface this is an intentional juxtaposition, the idea being that there is something inherently funny and unintelligent about blackness. By exaggerating features like full lips, darker skin tones and hair, some of the defining characteristics of black people are turned into a comedic trope. This in turn creates a narrative in which the physical manifestation of blackness is somehow laughable. Add to that the fact that such characters are often portrayed in full suits or elaborate dresses (for women) and the implication becomes that it is somehow exponentially funnier when a black person is dressed in formal clothing; the joke of course being that such a person is actually too uncivilized to actually wear such a thing in real life.

No doubt Paris was very aware of these histories when he saw the jacket and fired off a series of educational tweets to Field:

When are you tasteless designers gonna get over blackface‼️ Wow @Pat_Field you took a Major L.. ?? pic.twitter.com/5KMDVLdhgJ

Click on the tweets below to view the full thread:

@Pat_Field you need to educate yourself. You don't want to go down this road love your entire brand is on the line. pic.twitter.com/j1Ov659Y72

Field initially responded defensively, stating that because there were many cartoon characters on the coat, Paris was somehow taking the illustration too seriously. After a several tweets and Instagram posts, the incident culminated with Paris actually paying a visit to the pop-up and speaking with Field in-person. Shortly after, he posted the below video with the caption, “I spoke with @Pat_Field, she understood & took it down. Thanks for the support and I hope this sent a message.”

I spoke with @Pat_Field she understood & she took it down. Thanks for the support and I hope this sent a message??✊? pic.twitter.com/kbFny3ESLo

For her part, Field, who spoke with Mic, directed the platform to an old Facebook post which she said expressed her feelings about black people:

She also went on to say, "The only thing I left out was my belief that we should have a holiday of thanks to all of our African-American citizens who gave their lives of generations in the disgusting American history of slavery. The proof of this is that the vast majority of American citizens do not even recognize or acknowledge Black History Month every February."

Despite Field’s stance, the irony of her failure to recognize the implications of placing such a character on a garment under the guise of art is another reminder that designers and other creatives have a responsibility to educate themselves on the histories behind the “inspirations” they share with the world. Moncler’s similar golliwogg slip-up this July should have sent that message had more people been paying attention.

While many applauded Paris’s effort to help Field with the aforementioned education process some felt he overreacted, claiming the images weren’t offensive in the context of the coat. Some also felt that because there was no performance of black face there was no issue. Despite the lack of an all-out minstrel show, it’s important to remember the origin the golliwogg and its contribution to the normalizing of pejorative representations of people of color.

The golliwogg may be one of the lesser-known anti-black caricatures but its history is just as harmful and pervasive as minstrel shows or the mammy figures so many of us instinctively feel are wrong. Furthermore, the presence of the golliwogg actually spread into the commercial sphere—particularly in Europe—to a much larger extent than many of the other negative representations of black people. Not only did the character star in many of Upton’s sequel books, it was also made into a beloved children’s doll and even appeared on cigarette cartons, household products and even perfume bottles. The golliwogg was even used as the mascot for UK-based Robertson Jams from 1910 up through the 1980s when the Greater London Council finally actively boycotted the company for being offensive.

That said, I’ve got to say I’m firmly #TeamParis on this one.