100 Women: Natsai Audrey Chieza is Changing the World One Petri Dish at a Time 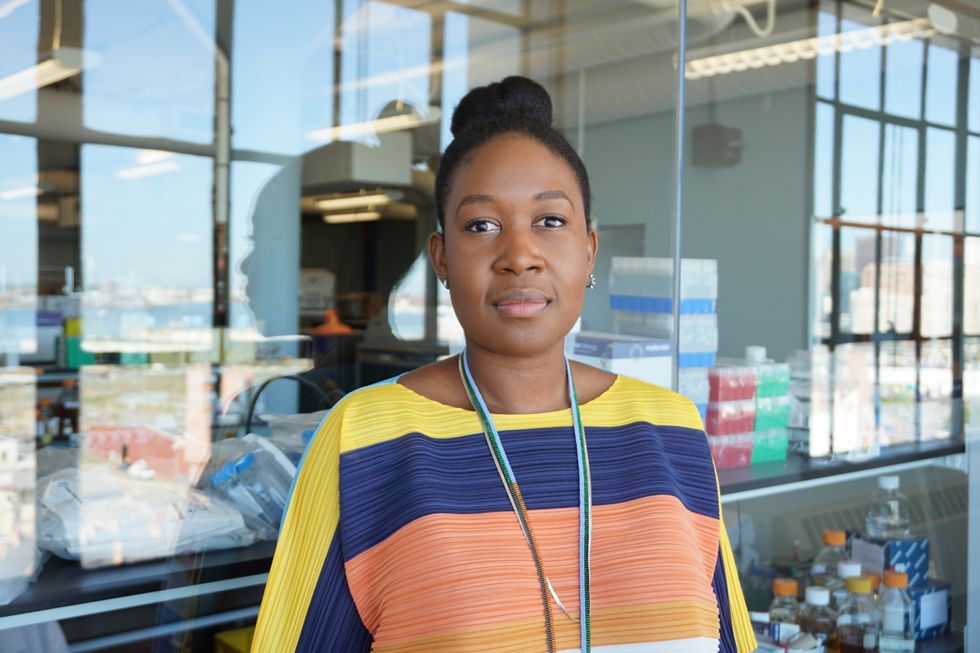 Her interdisciplinary approach to biology and fashion has sparked conversation about the future of sustainability and pollution in textile manufacturing.

The bold jewel tones of OkayAfrica 100 Women honoree Natsai Audrey Chieza's silk scarves aren't the product of hazardous chemicals or silkscreen printing. Instead, they are the product of bacteria. Specifically coelicolor, a strain of bacteria found in soil that happens to excellently synthesize organic chemical compounds. Working in the trade for six years, the Zimbabwean materials designer quickly came to understand why the textile industry is one of the most polluting industries in the world. Knowing that the most harm occurs during the process of dyeing fabrics, she decided to take action.

Chieza has worked with leading brands such as Microsoft, Nissan, and Unilever to usher in a new approach to science and design. Through her creative R&D studio Faber Futures, the design innovator uses the process of creating with bacteria to assist in moving mankind away from our fossil fuel dependency. As the biopigment expert put it [last year during her TED talk "Fashion has a pollution problem—can biology fix it?"], in the future we must make sure that we are not "mirroring the destructive legacies of the oil age."

Her interdisciplinary approach to biology and fashion has sparked spirited conversation about the future of sustainability and pollution in textiles. Here, Chieza expounds on her start, the pros and cons of creating something new and the urgency of change.

The following has been edited for length and clarity

Akinyi Ochieng for OkayAfrica: STEM and the arts are often conceptualized as separate worlds. However, in your career, you've managed to find the overlap. How did you, a materials designer, end up dabbling in biotechnology?

Natsai Audrey Chieza: I've always really wanted to work within the creative field. I used to work in architecture where I really enjoyed my education in a systems approach to designs and designing for multiple contexts. But I wanted to explore a different side of the design world, so I began exploring the skill and context of material flows, and how technology and futures fits within this framework of how we design.

For my own work and my practice, not having a scientific background made me try things based on what I understood about materials and what I understood about the interactions in which those materials existed in society. I'm interested in a political lens, an economic lens, and how textiles perform in reality. That's not necessarily the approach that a scientist would have taken. Now that's not to say that science isn't important—it's vital. But innovation can occur in that intersection.

Did you go into this thinking, "Oh, I'll figure it out. There must be a path to make this work"?

To be honest, when I started off, the field was not defined. I think I found something really interesting, which was about how biology was becoming a realm of design, and I just explored that as best as I knew how as a designer and non-scientist. It just so happened that around me there was a context that was imagined but enabled me six years later to say, "That's the industry where this work belongs" and stakeholders who give me a space to further my work in a creative and experimental. The path was never anything clear at all. I learned as I grew.

There's a phrase that is often repeated today: "You can't be what you can't see." But you have really created a niche for yourself. What are the benefits of entering an emerging space?

I think what's amazing is not having anyone or anything telling you that what you think is impossible. If you're carving a new territory then you must trust in your instinct and vision to effectively push where the work can be and where it exists. You're not asking permission to do anything. Of course the flip side of that is you have to bring people with you, and so part of you being able to do the work is convincing people that your vision has legitimacy and it's worth exploring, worth taking a risk to look outside of that box.

It's often quite challenging to figure out how to find the strength to push something that hasn't been done before. There's no precedent or rulebook to my work, but sometimes it's really nice to have a rulebook. [Laughs] However, I think it's made me a person who doesn't see challenges as obstacles that are in the way, but more as problems that can be solved. And I think that's the good thing.

Much of your work is about biopigments. What color excites you?

It's not really the colors that excite me. It's color as a cultural context that really fascinates me. I'm really interested in if a microbe is almost like this living factory that produces this pigment, and the technology can be shared and deployed with people as to how you work with it across the world, then what are the cultural interventions that can happen in South Africa versus in Argentina versus in the United Kingdom, based on this common microbe. I think that's always been what interests me the most, the context in which our materials exist. I think a really good example is indigo, and how from Japan to West Africa, indigo is just this really, really rich material, and the process and the craftsmanship that goes into it. I'm interested to see how the future ecology of making arises in response to biotechnologies across the world.

Where do you see yourself and your work evolving in the near or long term?

I'm sort of going through that growth moment where you've been working toward something and then you've arrived at that and you're like, "Right, what's next?" I think I'm fundamentally somebody that wants to use design as a discursive tool to understand how our technologies proliferate. My focus is really on the imagined life sciences and how they're going to become very much a part of all of our lived experiences, and particularly in the context of really urgent changes that are happening from a local level to a global level. From global warming and climate change to resource scarcity across regions, our response to what I think being able to design with living systems, can afford us in the future. So my work really is about understanding how to engage stakeholders across different sectors to grow a consensus around how we're going to leverage these sorts of technologies so that they can be technologies for good. That's really where this is going.