'195 Lewis' is a New Series About Being Black, Queer and Polyamorous in Brooklyn 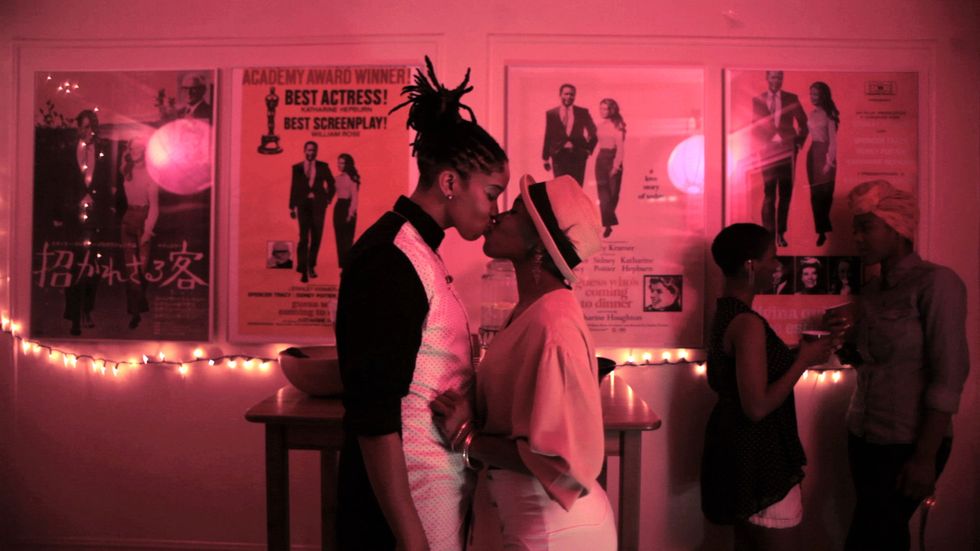 New York film history is being made tonight when 195 Lewis, a new dramedy series about a group of Black, queer and polyamorous women in Bed-Stuy, screens at the Brooklyn Academy of Music. The five-episode premiere will mark the first time a web series has screened at BAM’s independent theater. That tidbit aside, you need to know about 195 Lewis (“one-nine-five Lewis”) because it looks and sounds absolutely dope. It’s also incredibly necessary.

At the center of the series is a queer couple, Yuri and Camille, testing the boundaries of an open relationship. It’s directed by Bronx-born, Brooklyn-based filmmaker Chanelle Aponte Pearson, who co-wrote the series alongside Terence Nance, the prolific artist, musician and filmmaker behind An Oversimplification of Her Beauty.

We caught up with Aponte Pearson for a phone conversation ahead of this week’s premiere.

It’s essentially about a group of friends trying to navigate being black, queer and polyamorous in Brooklyn, New York. It really centers around one queer couple who decides to open up their relationship, and all of the drama that unfolds when that happens. What I really love about the show is that on one hand it focuses on what really happens when we're just radically honest and open, but then it's also about the community of women that I'm a part of here in Brooklyn.

Can you tell us about that community?

Whenever I meet someone I try to stray away from the question of "Oh, what do you do?," but instead, “how do you spend your days?” I do feel like a lot of our folks we're just trying to figure out what makes sense for us, and how can we contribute to the world, and how can we make a difference in a way that isn't your typical nine-to-five. How can we be creative with how we spend our time and really try to uplift ourselves and our community?

How do you spend your days?

Nowadays I'm writing and directing more. In addition to directing 195 I also just wrapped a short doc series in collaboration with BRIC [the Brooklyn Public Broadcasting station]. The series is called Brooklyn Is Masquerading As The World. It profiles artists and other interesting folks living here in Brooklyn. I literally just made a list of all my friends and told them "I'm gonna come follow you around for a few days."

I'm also one part of MVMT. My other creative and life partner, Terence Nance, we've been working together on MVMT for the last 10 years. So I’m also running a film production company in addition to writing and directing. My background has been in producing, so I've largely produced over the last several years. I was the producer on Terence’s An Oversimplification of Her Beauty. Over the last three or four years I've been making the transition into writing and directing.

It's really interesting to see how we recognize all the ways that we contribute and that we do the work. My other friend, she's a chef, right? Even in thinking about cooking, she's all about decolonizing the kitchen and returning to the land. Returning to the kitchen, to cooking as a form of alchemy, and really kind of reclaiming that power for ourselves.

That's what I love about the community. You can have activists, advocates, and then you can also have a chef. You can also have a bunch of visual artist friends really confronting a lot of the issues that we're going through, like how do we respond to the recent election?

I really love that we respond in a bunch of different ways. And we all acknowledge and honor all of the different ways. We're not trying to judge, [like], “You need to be out in the streets..." Yeah, I can do that, but I can also be over here doing magic and healing, and healing myself and others too. All of those things are equally important. I feel fortunate to be surrounded by people who believe in that.

There's been some amazing developments as of late in film. What do you think about this year in film and TV and the community of filmmakers of color?

I guess the part of me that is equally excited is also, I don't want say pessimistic.... I hope that we can continue to make the work. I hope that this year isn't going to be seen as, "Yes, this year 2016 was a great year for Atlanta, for Issa." I don't want this year to be the one year. I want next year to also be the next year.

To build on this.

Right, exactly. To continue to build and grow. And to continue to be prolific, so it's not just the two or three folks who are doing amazing work. You know, your Avas... Let's continue to grow and continue to put out the work. I guess I'm just encouraged to see more of the work.

We have so many stories to tell. So many viewpoints and perspectives. All I want is to see more of that. Even with 195, I don't want this to be the definitive work on what it means to be black and queer and poly. There needs to be so much more. This is just one of many. I'm excited to put this story out, but I also am fully aware that there are so many other stories and perspectives out there. And I welcome those too. I want to see them. That's the whole point. If you're not seeing what you want, part of it is also like “alright, well we got to create it.” And I welcome all of that. As an individual filmmaker, but then also as someone who’s running a production company and wants to mentor and push forward other projects.

I’d be happy not seeing another movie about a straight white male ever again. They're so boring.

And that's the other thing about 195. You have the shows like The Affair and Scandal, where the premise of the drama is rooted in lies and deception. I'm really interested in seeing what happens when you're just honest. What happens when you are radically honest and open about what you're feeling and what you want, and what your desires are. And what happens when you're not completely fully honest. How do we navigate those conversations, how do we navigate those experiences? We have no blueprint. There's no roadmap for what it means to be ethically non-monogamous. We have lots of examples of non-monogamy, but they're mostly toxic, unhealthy and cause a lot pain. I'm curious to explore that. We just don't see it.

Could you tell us about the two main characters?

Yuri is a 20-something artist. She's one of those people in the community, you either want to be her or want to be with her. She's extremely confident and comfortable in her own body, and she is absolutely in love with Camille. They work as a team. They love and support each other. Camille is a recent PhD grad, basically trying to find a job.

In the pilot episode, we’re introduced to what polyamory could look like for them. But as the series progresses, you’ll start to see that Yuri's idea of polyamory may start to shift from what they originally agreed upon. We really get to see how they navigate that, and not in a clean way. There's no blueprint for them on how to do this, how to do this whole poly thing. We see them try, we see them fail, and we see them try to recover from their experiences, from their mistakes.

After the screening at BAM, how and where will people be able to watch the series?

We will be going into production early next year to produce the next three episodes, which will complete the first season of the series. We're partnering with BRIC to roll out the first full season next spring. It'll be broadcast on BRIC and then also we'll have an online launch of the first full season. We want this on TV—we're really hoping to develop a pilot so that we do see it on TV.

I really hope that happens. What's the best way people reading this article can support?

I think the biggest thing is really just sharing the project. Engaging with us on social media about some of the themes and topics on this issue. I feel like a lot of the feedback that I get from funders or partners is, "Is there an audience for this? Will people be interested in this? Is this relatable?" I think the best way to support the success of the project is to prove that, yes, there is an audience for this, that the story's worth being told.