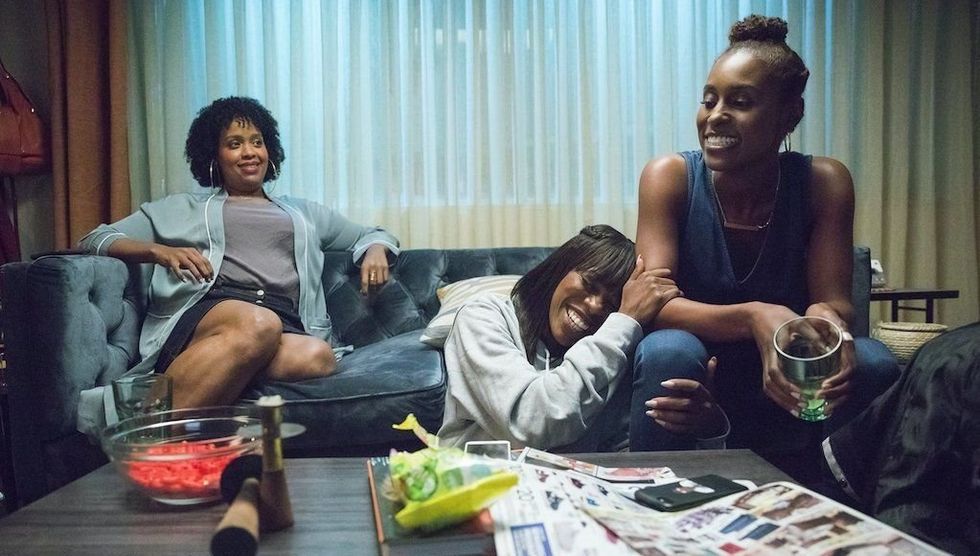 This year's television illustrated black women's sexual narratives through a handful of groundbreaking, yet problematic personalities—and we're here for it.

This fall, a humorous sexual moment swept over the internet. It was an ongoing freestyle, where the lyricist articulated the extreme lengths they'd go for good dick. Introduced by Gameova Reedy, the "For the Dick Challenge" inspired celebrities like Erykah Badu, Issa Rae, Regina Hall, Cardi B and Gabrielle Union to share their own versions, equipped with dickmatized, ridiculous bars. A "For the Pussy Challenge" started as well, but that's another essay.

The "For the Dick Challenge" was met with general praise and affirmation, because who hasn't found themselves doing something out of character for great sex? But naturally, there were some who found this social media performance thirsty and degrading to black women. As Tamara Winfrey Harris points out in her essay for Bitch Media, society claps back when black women assert and express our sexuality, but rarely defend or support us in issues of sexual assault or abuse. This double standard is rooted in decades long stereotypes about us being inherently hypersexual beings with no say or ownership over our bodies.

Black women having sex—on our own terms—is still seen as a revolutionary act. Our culture tries to diminish us to "hoes" and "sluts" when we own our sexuality: a slur for being promiscuous or curious that we have recently turned into a label of pride.

Yet, 2017 has seen a surge in representation of women of color in media as healthy, sexual beings with agency over our pussies. Sex and body positive rapper and comedian Cardi B, hit movie Girls Trip and Kelela's sci-fi musical joyride "Take Me Apart," are some of the contributions to the conversation on how Black women manage our bodies and bedrooms.

However, I'm most interested in how this year's television illustrated black women's sexual narratives through a handful of groundbreaking, entertaining and sometimes problematic personalities. There's Chewing Gum's Tracey, a religiously sheltered 20 something year old living in the projects who anxiously loses her virginity; Issa and Molly of Insecure, two single women navigating the complexity, and confusion, of online dating, casual sex and devastating breakups, and Nola Darling of She's Gotta Have It, a young artist looking for validation for her "abnormal" sexual appetite from her three male lovers, amongst other fabulous and flawed fictional personalities.

Now is typically the time when women are encouraged to think about marriage and children, but most of us would rather focus on our career, personal growth and maintaining dynamic sex and love lives. These characters exhibit the various ways black women engage in and navigate sex and emotions, without feeling bogged down by gender roles and society's expectations. Although some representations were more effective than others, they serve as rousing topics for a wider conversation on where we are sexually and cinematically and how much farther we need to go to include stories about all sexualities and relationship structures.

In Netflix's reboot of She's Gotta Have It, we are introduced to a millennial version of Nola Darling, a liberated, petulant and self-absorbed woman with a trail of captivated lovers. Jamie Overstreet, Mars Blackmon and Greer Childs are the most prominent partners in her bedroom. With them, she has fulfilling sex under her terms and at her convenience, but they all try to sway her into monogamy.

Nola defines herself as a pansexual polyamorous person who wants to commit, but her emotional reliance on her lovers proves otherwise. Here polyamory is inaccurately dressed up as an excuse to be a dishonest, inconsiderate and selfish lover: Nola takes phone calls from other lovers while in bed with one, is unjustifiably jealous over Jamie's wife and forces her lovers to meet against their will—over Thanksgiving dinner, where she unveils a nude painting featuring them as a 3 headed monster.

Her truest relationship, with a woman named Opal, is as heartwarming as it is poorly executed. Nola only seeks Opal when she goes on a dick strike—as if queer women choose to date other women as an affront against men. Although their chemistry is undeniable, and Nola recalls feeling her purest, safest self with Opal, she is still unable to commit in the simplest ways, completely disregarding that relationships are a two-way street. Nola is supposed to represent a black woman on a sexual journey, but instead she's perceived as a woman who won't grow up and uses her rules and standards as an excuse to disregard others feelings.

I've written about the importance of Chewing Gum's Tracey and Insecure's Issa and Molly as leading ladies sharing a variety of black women's stories. This year we saw Tracey lose her virginity, Issa embrace hoedom and Molly enter an open relationship, a decision that may prove perilous to her heart next season, but for now seems sexually enticing. These characters prove that our partners, and the reasons we choose them, don't always depend on commitment, a future or romantic expectations—some are just funny, our friends, or live downstairs.

Yet, I especially appreciate how these tales illustrate fucking. Most of Insecure and Chewing Gum's sex scenes are candid, hilarious, unsatisfying and awkward—a direct deviation from 90s movies that usually depict Black lovemaking as hyperromantic, orgasmic and ultimately perfect. Love Jones' Nia would probably cringe at Issa's clumsy first time with neighbor bae, while the women of Living Single would cheer her on and give a few pointers. That's what makes their stories, although exaggerated and amusing, land close to home: it breaks past the sheer, sensual curtains of how media usually displays romance, and busts into our messy, tornado-driven bedrooms.

But for these characters to truly feel authentic, inclusive and progressive, writers have to dig deeper into the intersections of black women's experiences and identities to project characters that truly push past stereotypes or misconstrued ideas about black sexuality. Nola Darling would have been a grand opportunity to explore polyamory and queer identity, but instead her multiple relationships are fueled by narcissism, insecurity and uncertainty; the best part about this show is the fine-ass cast. Where Insecure succeeds at showing the intensity and discomfort of sex and dating, addressing stigmas around sex, and forgiving character's mistakes, it can feel as though the writers are persistently striving to prove a point about sex and black women without tightening the loose ends they want us to pick at (i.e. the unresolved oral sex episode and Molly's homophobia).

Thankfully Empire's Becky is representation of a full figured sista having sex and enjoying it, and How to Get AwayWith Murder's Annalise, a middle aged black woman, is never shy of inviting men and women into her bedroom. Queen Sugar's Nova is another shining example of a sexually fluid black woman living her truth, however I'm not caught up on this series to say more. And Netflix's Easy—an anthology series that delicately pinpoints the intricacies of relationships—features few, although wonderfully written, black women. Jo and Chase, an interracial lesbian couple, raise thoughtful questions about feminism, art and veganism—and engage in sex scenes that feel fluid and fulfilling. But in 2018, I'd like to see even more diverse representations of intersectional and marginalized identities rustling their sheets.

I am on a sexual and romantic journey of my own. After exiting a 4-year monogamous and long distance relationship a year ago, I've been actively, but not always successfully, relearning my desires, sexual expectations and boundaries. Watching these women navigate complicated, sensational and awkward sexcapades is like witnessing an exciting and emotional parallel universe in action—except these characters have had way more action than I this year.

Yet, as many inspiring, relatable or conflicting characters there are embarking on sexual awakenings, nothing can ever prepare you for the real thing. There is personal, intellectual, emotional and physical work us black women do to untangle the internalized ideas on sexuality and gender that society has conditioned us into: a process that far exceeds eight episodes.