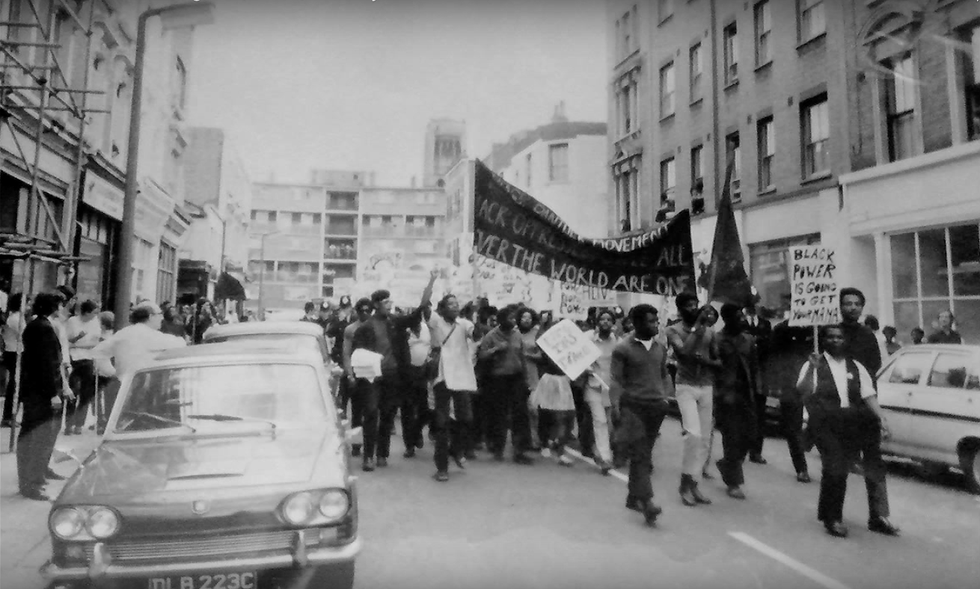 Video still from 'Black Panthers: United Kingdom, Israel, and Beyond' on YouTube.

A history of radical Black British organizations that have paved the way for today's global black social movements.

October is Black British History Month in the UK. As the country is facing some dire political times—Brexit looming in, an incredibly anti-black government with policies disproportionately affecting black people in the UK, the fact that over 500 Black and Asian ethnic minorities have died in either police custody or in prison over the past 27 years, and that the last time the authorities had been convicted of a crime was in 1971—show more than ever are grassroots movements needed for black people to self-organize.

There are, thankfully a few of them like London Black Revs, Black Lives Matter UK, Dissidents and Southall Black Sisters (although it's worth noting that some of them use the term black politically, i.e. encompassing non-black POCs as well who are oppressed by white racism). But if it wasn't for the historical black radical organizations that have paved the way, many of them wouldn't exist today. The recent UK-set TV show Guerillahas, albeit in a messy way, brought to the light the history of the Black British Panther Party. But what about the other organizations and their historical role in the fight for black Brits to have their rights respected by the state?

Here is a list of some of the most important ones. Unfortunately, their fight today is more than relevant—especially according to this report.

Created in 1970 in London by Leila Hassan, George Joseph and Ricky Cambridge among others, the Marxist-Leninist black group aimed to defend and fight for the rights of the significant black communities who had settled in the UK by that time, and were facing systemic racism (difficulties to get housing, jobs, as well as frequent police brutality). The BUFP was a small group, frequently organizing marches such as the New Cross Fire and the Brixton uprising, which came after Cherry Groce had been shot by the police, making her disabled, in 1981.

They would also organize public talks and lectures as well as the "Black History for action" meetings among the community to discuss their heritage and culture, organize fundraisers and work on their international relations with other groups such as the All-African People's Revolutionary Party (founded by Kwame Nkrumah) and the African Socialist International. The BUFP published a journal called the Black Voice which was anti-capitalist, anti-racist and pro-socialist. Through the Black Voice, the BUFP could reach a wide audience and tackle issues such as education of black children in the UK, police attacks against minorities in the UK as well as pledging for unity among workers from all the world—no matter their race. The party was dismantled in 1999 after some BUFP members started a new, more Afrocentric organization called African People's Liberation Organization.

After Malcolm X's visit to the UK in 1964 and 1965, and Stokely Carmichael's talk at the Roundhouse in London in 1967, a group of British activists—Linton Kwesi Johnson, Darcus Howe and Olive Morris—were inspired in 1968 to create the British Black Panther Party in Brixton, London (a place that would later be infamous for the number of police assaults against black people and subsequent uprisings that would happen in 1981, 1985, 1995 and 2011). The British Black Panthers, in contrast to the American one, did not carry weapons but similarly focused on education (teaching black history to children through their Youth League), fought against segregation, and organized demonstrations, such as marching against the police raids on the Mangrove (a black-owned restaurant).

Eventually, the party officers that were tried for inciting violence were acquitted by the jury, exposing the racial, institutionalized hatred of the British police. They also fought against the repatriation bill, suggested by members of parliament to repatriate Commonwealth citizens from the UK, a bill that thankfully was quashed at the parliament. A few reasons led to the dissolution of the party in 1973: the resolution of some the most pressing issues for the black communities, such as the British police creating a special branch to get rid of the group by infiltrating it and harassing them, and in-party fighting. A group of women, among them Beverly Ryan and Olive Morris, created the Black Women's Group who focused on fighting for the rights of Black women in the UK.

Created in 1925 in London by 21 law students including Herbert Bankole-Bright and Ladipo Solanke, the group aimed to support the welfare for African students in London but quickly became the main organization for West Africans living there as well. Like many other organizations they published a journal, WASU, in 1926. It ran until 1932. They also held fundraisers to provide accommodation for African students facing segregations and who were prevented by racist landlords to house themselves. WASU opened a hostel in Camden called Africa House in 1933.

The West African Students' Union would also demonstrate and lobby against racist policies, such as the implementation of an African village exhibition in Newcastle and networked to form links with communist groups such as the Negro Welfare Association, who fought against Italy's attempt to colonize Ethiopia. They also campaigned to support the 1938 Gold cocoa hold up, to support farmers trying to pressure companies by not giving them their supplies. WASU undertook more fundraising activities and published a new magazine, WASU News Service. Unfortunately, the group was dismantled in the 1960s and a few members left to create the National Union of Nigerian Students. WASU had proved itself to arouse political awareness among African students such as Kwame Nkrumah.

Created after the Notting Hill uprising of 1958 (triggered by gangs of Teddy boys and neo-nazis who had the habit of attacking black people in the area) and the lack of response from the police who refused to protect black citizens from the threats of fascists, the West Indian Standing Conference aimed to advocate and campaign for better policies and strategies for black people and for communities to live in harmony and eradicate racial discrimination and called for social action for the British authorities. They organized cultural events, including street carnivals, and fought against the London transport authorities to have them hire the first bus inspector of African descent. They also delivered written submissions for the Stephen Lawrence Inquiry (the death of a 17-year-old black boy who was killed by a gang of racist white men in 1993).

Thanks to WISC, a few bills were implementing to enhance the lives of black people of Caribbean descent like the 1965 and 1976 Race Relation Acts, as well as the publication of a report by Joseph Hunte on police brutality and black deaths in the UK. Out of all the black radical organizations that were founded in the 20th century, the WISC is the only one that remains active to this day.