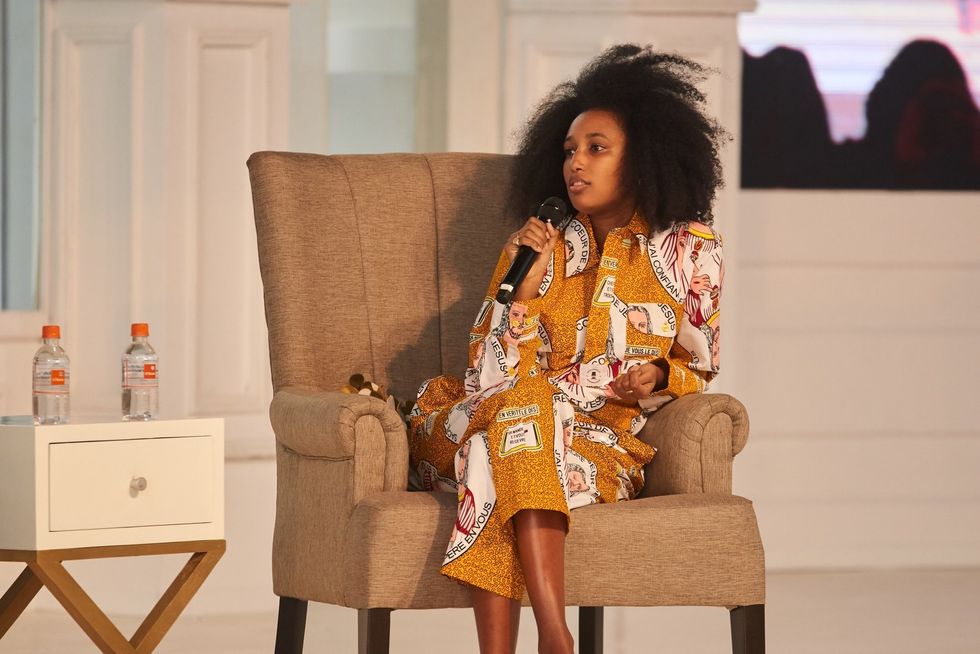 The Senegalese-French editor spoke about her creative process, style on the continent and bringing versatility to Vogue.

Closing off GTBank Fashion Weekend's masterclass series after Dapper Dan's, we got to learn about Julia Sarr-Jamois' progression in the fashion industry, her creative process and opinions on trends among other topics in a masterclass focused on "Authenticity in Style and Global Fashion Trends."

Sarr-Jamois made a decision to forego a life tied to her formal education, and follow her passion at age 19. This was a decision that has shaped the world around her. Today, her work can be found on the pages of i-D as senior fashion editor-at-large. She also joined British Vogue in May as one of the youngest fashion editors-at-large. The Senegalese-French editor has also collaborated with Nike on a muted pastel Cortez that's the perfect balance of color and cool, but that's just a small part of her artistry.

Here are the five things we learned from her masterclass.

Her career path changed after an internship at i-D, and started out full-time at just 19-years-old.

Julia started out in a foundation course at Camberwell College of Arts, University of the Arts London, which is one of the UK's top destinations to study art and design. After responding to an open call, she got an internship with i-D, then "followed her gut" and dropped out to focus on a full-time engagement at 19. She became fashion editor 2 years later and has progressed to become a senior fashion editor-at-large. All this may not have been possible if she hadn't followed her gut instinct to pursue her passion full time.

A day at the office is not all about exciting shoots at exotic locations, but rather starts with cold, hard research, followed by military style organization.

She explained the creative process behind some of her most iconic projects. Julia puts together a story by "initially researching all the shows, to pull together ideas from that", and stressed the need for researching stories thoroughly when ideating on a concept "research is super important to the beginning stages, as well as conversations and collaboration." She also explained that the creative team involved is a big part of the process to figure out early on, "when thinking about the final images, think about who would be a good photographer to shoot the picture, then stylists, models and makeup can be decided after." Working on set, she explained, "shoots are 90 percent organization" but also illustrated the need to be able to think on one's feet with anecdotes from improvised shoots she recanted on stage.

According to Julia, working at Vogue versus i-D is not as straightforward as you may think, but more like using two different, connected parts of your brain. "i-D is youth and focused on street culture & politics. While Vogue is more about a luxury/high end aesthetic. It's important to be able to show both sides," she said. She's interested in both and her roles allow her to do them. She recently started vogue in May and works with Edward Enninful, who championed her at i-D.

To Julia, everyone in Africa is stylish. It is true that people can get lost behind the clothes in a lot of cases, but it's not her experience in Lagos. "The attitude is here, people wear the clothes not vice versa." As she said this, on stage she literally embodied this perspective which she explained, effortlessly pulling off an all-Nigerian look on stage that also combines the two worlds of luxury/high end fashion (Kenneth Ize) with streetwear (WafflesNCream).

She projected into the future of fashion on the continent saying, "African fashion is about tailoring not just prints and it's going to be interesting to see where it goes." Explaining her personal approach to style and trends, "It's about being in the know of what's interesting and cool, but more importantly, mixing it in with other stuff to make it your own".

She had some advice for those on Instagram (coughs in 'everybody'): "Get a style to your Instagram—experiment to find a formula that works for your brand." On leveraging social media for international exposure, the key thing according to Julia is to "focus on what's going on locally first", before moving on out for a global audience.

Her mother's creativity is a major influence to her views on creativity and work.

When asked the question, "What do you say to African parents from the old generation who don't believe in the arts as a sustainable career path?," Julia shared stories of her upbringing.

"My mom was a textile designer, so it's been rewarding to be able to see the creative process through her." She said in conclusion, "Creativity is part of being human and part of being alive."