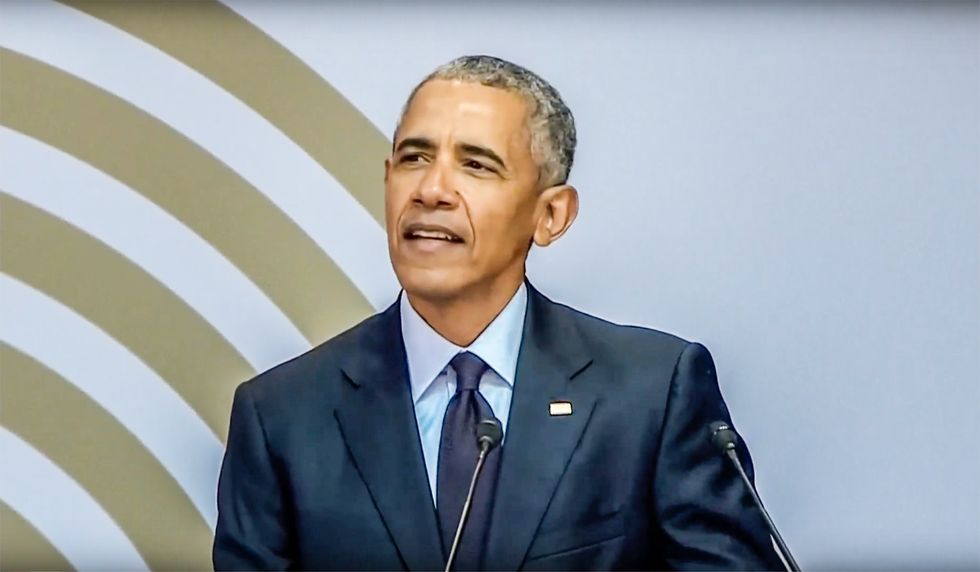 The former U.S. president goes in on xenophobes, climate change deniers and the corrupt to mark the 100th anniversary of Nelson Mandela's birth.

Former U.S. president Barack Obama just gave his biggest speech since leaving office—and he did it in South Africa to mark what would've been Nelson Mandela's 100th birthday at the annual Nelson Mandela Lecture.

In his lecture titled, "Renewing the Mandela Legacy and Promoting Active Citizenship in a Changing World," Obama appealed to people around the world to honor human rights and other values under threat, as well as to keep alive the ideas that Mandela worked for—democracy, diversity and for all to gain access to good education.

South African president Cyril Ramaphosa and Graca Machel, Mandela's widow, introduced Obama to a cricket stadium full of an estimated 14,000 people and even more who tuned into the lecture online.

Take a look at our five takeaways we learned during Obama's speech below.

Obama began his speech talking about economic inequality and the failure of governments and economic elites.

"Right now I am surprised by how much money I have, and I don't have half as much as these guys," he says. "There is only so much you can eat, only so big a house you can have...I mean, it is enough."

"You don't have to take a vow of poverty just to say let me help out a few of these folks. I'll pay a little more in taxes, it is okay, I can afford it."

On Immigration and Racial/Ethnic Differences

Obama couldn't resist a World Cup reference and he used it to talk about immigration policies. Despite urging people to take a humanitarian approach to immigration, he still maintained a strong stance on border protection.

"Just look at the French football team...Not all of those folks looked like Gauls to me, but they are French. They are French," he says. "It's not wrong to insist that national borders matter...those are legitimate things...We can enforce the law while recognizing the essential humanity of people."

Obama targeted both the U.S. and African governments without mentioning any names when he spoke about democracy. He touched on the importance of highlighting grassroots movements, minority rights, and freedom of the press.

"Madiba taught us that democracy is more than just elections. He could have been president for life. Who would've run against him? Ramaphosa is popular but come on. Plus he was too young," he says. "You need minority rights, checks and balances, freedom of speech and an independent judiciary. Democracy can be messy, slow and frustrating, but the efficiency that's offered by an autocrat is a false promise."

"It is time for us to stop paying all of our attention to the world's capitals...and focus on the world's grassroots. That is where democracy comes from."

"We have to believe in an objective reality. You have to believe in facts. Without facts there is no basis for cooperation. If I say this is a podium, and you say it's an elephant, it's gonna be hard for us to cooperate," he says. "I can't find common ground if someone just says climate change isn't happening."

His Message to Young People

Obama ended his speech on a hopeful note, urging the youth to "get aroused" and to "remake the world."

And lastly, though unrelated to his Mandela Day speech, check out this video below of Obama dancing at the opening of his half-sister, Auma Obama's foundation Sauti Kuu.