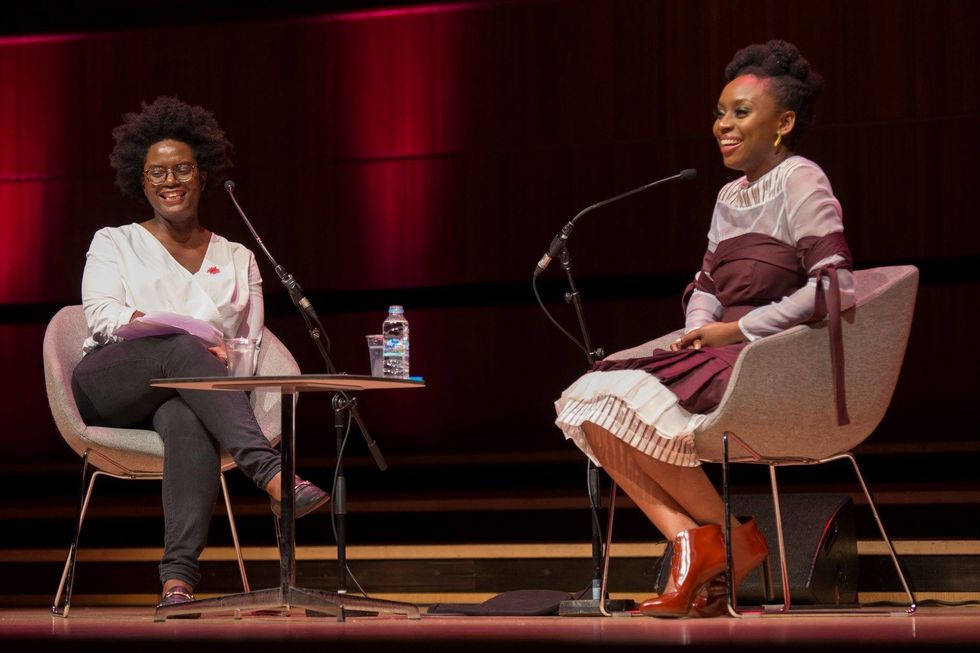 Photo by Ellie Kurrtz via Women of the World Southbank Centre's Facebook page.

The talk was part of Women of the World Festival at London's Southbank Centre.

Award-winning novelist Chimamanda Ngozi Adichie, author of Half of a Yellow Sun and Americanah, was interviewed by Reni Eddo-Lodge, author of Why I'm No Longer Talking To White People About Race, in an hour-long conversation that covered topics like feminism, race and life as a writer.

Greeted by a standing ovation upon entering Southbank Centre's Royal Festival Hall, the pair took their seats in what was the most high profile event at the annual Women of the World festival, now in its eighth year. Below are our seven takeaways from their conversation.

1. Adichie decries how "people don't see you, they see what you present"

As well as the burden of representation heaped on writers and artists that aren't "white," Adichie made a point of rejecting the simple imposition of color "black," equally strange and unwanted, as a descriptor and base for personality. Eddo-Lodge, in her turn, talked about being pegged as the UK's new go-to for matters to do with race and the understandable tension of being praised for being forthright and outspoken, while also being pigeonholed for it—a conflict Adichie has long absorbed into her writing and public persona and about which she is often evangelical.

2. Adichie advocates for a medicine for stupidity

Adichie, who discontinued a medical degree to pursue fiction writing, prescribed a "medicine for stupidity" for what must be routine show of ignorance and consideration by "white" readers. She may be referring to the latest of such provocations when in France for an interview this January when she was asked by a journalist if there where bookshops in Nigeria.

3. Adichie and Eddo-Lodge refuse to cater to the emotional needs of their white readers

Both Adichie and Eddo-Lodge discussed their resistance to being positioned as agony aunts by readers who make it the writer's job to assuage white insecurities and guilt. Adichie recalled the white male readers who take as an affront to their manhood the characterization of "Richard", the British man who became Biafran in "Half of a Yellow Sun" (2006). Eddo-Lodge, as if still surprised by the mere fact, told of readers who insisted on having conversations about her book "Why I No Longer Talk To Black People About Race" (2017) when they're yet to read it.

4. Adichie believes post-colonial governments were not "set up to succeed"

On the matter of governance, Adichie is of the belief that immediate post independence governments on the continent where "set up to fail," not least when imposed by authoritarian colonial rule who paid insufficient consideration to the constellations of ethnic groups and languages when drawing borders and installing governments. But she also laid a portion of the blame on the African leaders who mismanaged the often precarious they had inherited.

5. Adichie and Eddo Lodge emphasize the distinction between "black" and "white" feminism

Both Adichie and Eddo-Lodge attempted to answer the vexed question of what is black feminism? And how does it differ from white feminism? Who gets to define the terms and conditions of the philosophy and practice? The charge against white feminism as yet another hurdle next to patriarchy was upheld, though no resolutions on how best to address the intra-women problem were offered by either writers.

Here, both writers mused on the ever present question of being individualistic in one's thoughts and beliefs while being part of a whole, and again no easy solutions were offered to what, in truth, is an inextricable problem. Adichie also reiterated her opinions on trans women whose life experience she insists are different from those of straight women, going on to pose the question "how do we talk about the needs of trans-women if somehow the orthodoxy is that it's all the same?"

7. Eddo-Lodge poses a big question to Adichie—"Are you your art?"

The question, posed by Eddo-Lodge to Adichie, was returned to asker but neither writers gave satisfying answers to what in truth is a larger existential question than the one hour interview may have allowed, or one either writers were willing to indulge.