9 Articles That Will Have You Questioning the 2016 Olympic Games 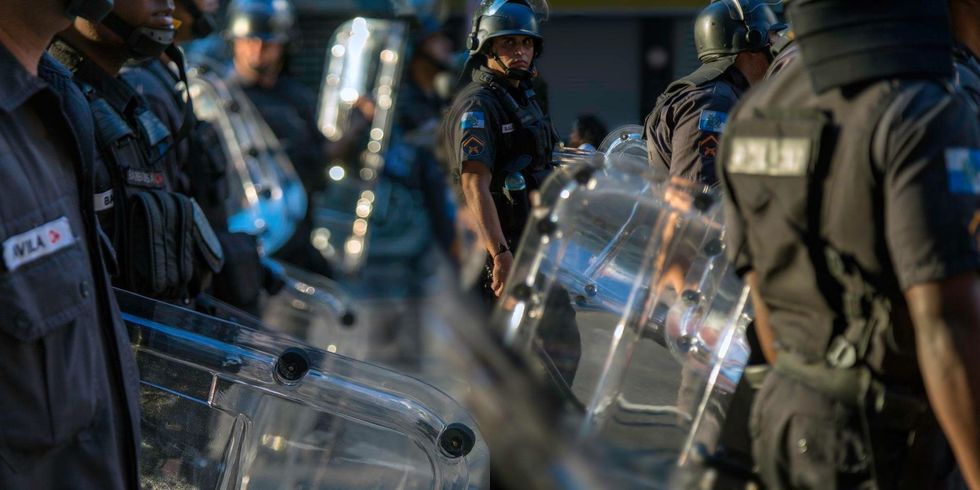 As we approach one week into the Olympics, we round up nine articles that will put the games in perspective and get you thinking.

With the Olympics comes an overflow of content (like any other major sporting event). Aside from the medal count updates, competition upsets and the quintessential information that floods your timelines, TVs and social media platforms, there have been quite a few pieces that touch on the other side of being an Olympics host country.

With the Olympics comes an overflow of content (like any other major sporting event). Aside from the medal count updates, competition upsets and the quintessential information that floods your timelines, TVs and social media platforms, there have been quite a few pieces that touch on the other side of being an Olympics host country.

From looking at Rio’s slave legacy and learning how athletes (don’t) get paid, to considering another angle at the Olympic refugee story and seeing the impact of increased police presence in the favelas, take a look at this roundup that will put the games in perspective and get you thinking as we approach one week into the Olympics.

While 4.9 million out of 5.5 million slaves arrived alive to Brazil between the 16th and 19th centuries, more than 2 million stepped foot in Rio de Janeiro. This piece from TIME chronicles that history to the present, with how the infrastructure developments around preparing for the Olympics came at the expense of losing Rio’s Afro-Brazilian character.

The Other Olympic Refugee Story

The Olympics are definitely a time for feel good stories, and the coverage around the first All-Refugee Olympic team didn’t fall short of that. But this op-ed for The Nation brings up the important point that although a temporary space and home is offered for the 10 refugee athletes, the Olympics are still a place where people become homeless because of the IOC’s demands—77,000 people were internally displaced since Rio won the bid in 2009.

This piece by Rio on Watch breaks down for us the global phenomenon of the criminalization of poverty in the context of Brazil. It touches on the many ways it can manifest, and its impact of mistreatment and prejudice faced by the poorest members of society, which are often influenced by and perpetuating racism and other forms of discrimination.

The Guardian has four journalists from three of Rio’s largest favelas look back on the past year marred by the Zika virus, landslides and police violence. Daiene Mendes in Alemão, Thaís Cavalcante in Maré and Michel Silva in Rocinha recorded their lives in their communities as Rio prepared to host the Olympics and many of their entries are filled with tension and violence with the increased police activity as the common denominator.

Dispatch from Rio: ‘The History of This Place Has Been Destroyed’

Media Diversified takes us through an example of the microcosm for the unfair struggle between everyday citizens and corporate interests through Rio’s Vila Autódromo neighborhood. Although the community’s been fighting eviction as it sits right alongside Olympic Park, their struggle came to an end where the last block was demolished two days before the opening ceremony.

Where’s the Investment? A Geographical Analysis of Rio’s Olympic Legacy

Rio on Watch provides us with receipts of maps and stats that question Rio de Janeiro’s mayor Eduardo Paes’ statement to The Guardian denying that Olympics investments have been concentrated only in the more wealthy parts of the city. From visuals breaking down the demographics and economic makeup of the city’s Planning Areas, his claim is in fact pretty questionable.

Olympics Executives Cash In On a ‘Movement’ That Keeps Athletes Poor

Where exactly does the guap that the IOC generates go? Most definitely not the athletes. Even to train for the games, many athletes are forced to live on unemployment. Will Hobson breaks down the schema for The Washington Post of how olympic athletes end up living on next to nothing, especially if they are the lot that are unable to bag endorsements and sponsorships.

This third piece by Rio on Watch we’re sharing takes a closer look at the TransCarioca Bus Rapid Transit (BRT) line—an Olympic Project that began two years ago and how it’s left an environmental impact of destruction and abandonment in the Ramos neighborhood in the North Zone of Rio. The transit route ended up ignoring the Simplified Environmental Report to ensure the last minute completion of the project.

From the Favelas, a Glimpse of Rio’s Humanity

“Most people only know the favelas through the news: crime, poverty, violence. But that’s only a small part of the story,” the Brazilian narrator of Google’s interactive documentary says in the introduction. “The favelas are not simply a place, they’re a people.” Hear the stories of the people and Afro-Brazilian culture that make up the favelas through ‘Beyond the Map.’