9 Things We Learned From the 'One Book, One New York' Conversation With Chimamanda Ngozi Adichie 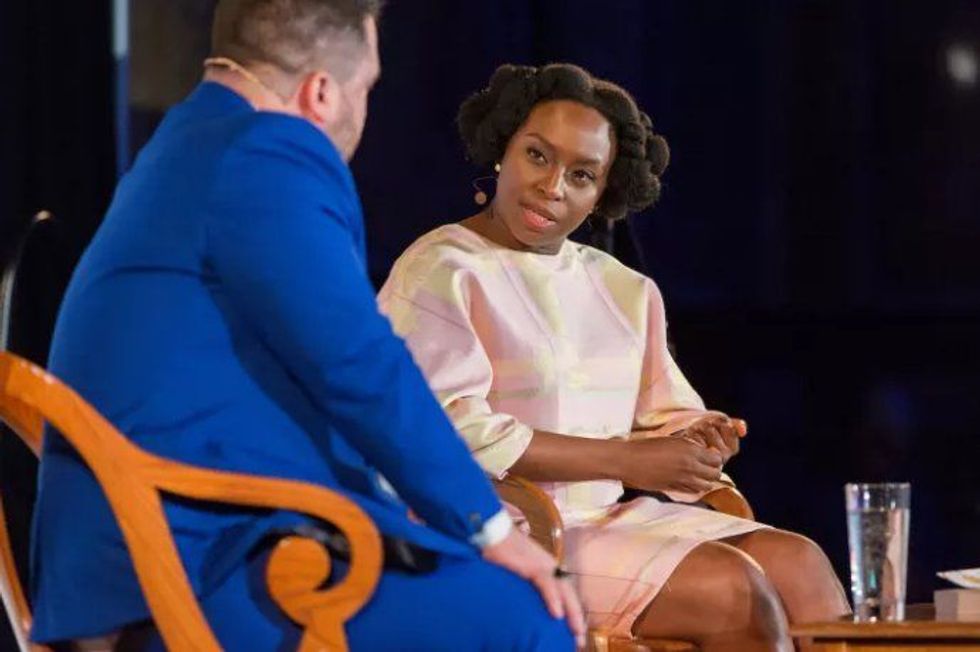 Some of the lessons we learned from the One Book, One New York Conversation at NYPL.

NEW YORK CITY — On June 5th, The New York Public Library and the Mayor’s Office of Media and Entertainment celebrated their One Book, One New York initiative with a conversation between Buzzfeed Books Editor Isaac Fitzgerald and Chimamanda Ngozi Adichie. Adichie’s best- selling book Americanah was selected as this year’s winner last February.

Below are 9 things we learned from their conversation about Americanah.

There’s a reason why Ifemelu's character is so ‘difficult’

Adichie didn’t want her protagonist to be easily likeable, she wanted her to be unapologetic and sharp in her observations of America, constantly pushing back on the idea of the grateful immigrant that Americans love to champion.

“There’s something petulantly feminist in my decision to make her who she is [...] I used her as a tool because it’s easier to see things about a country when you’re not really from that country,” she says.

Aunty Uju’s character embodies the difficulties of the immigrant experience

In Americanah, one of Aunty Uju’s main qualms is treading the difficult line between assimilating into the culture she immigrated in and simultaneously retaining her cultural identity. Indeed, her move to America has metamorphosed her from an independent woman with a strong sense of self to a woman rattled by uncertainty. An experience many immigrants can attest to.

Ifemelu wouldn't have had a party after Trump’s victory, but she wouldn’t dismiss him as un-American

One thing Adichie, a staunch Hillary Clinton supporter wants to emphasize is that her protagonist would think that Trump is in fact genuinely American.

“I don’t think Ifemelu would buy into the sort of leftist idea that somehow this is not us. I think this clear-eyed honesty is important because in some ways to insist that this is such an aberration is to not be honest about it and not to think about why it happened,” she says.

Many of the views Ifemelu expresses — especially those on race — are Adichie’s.

Though Chimamanda is quick to point out that the character is not modelled after her—“her life is much more exciting than mine,” she jokes. In the book, Ifemelu voices a lot of the opinions she upholds on race. As a student in the US, Adichie discovered the concept of race and she wanted her protagonist to have that ‘HA!’ moment.

Adichie got a taste for blogging thanks to her character Ifemelu’s job in Americanah and is considering for Ifemelu’s blog to take on a life of its own. We’ll be looking forward to that!

Update: Official photos from the @nypl are now available and I thought it important to share Chimamanda Ngozi Adichie's 💯 outfit/shoes: pic.twitter.com/5ayoBAdKvF

The likes of Mills & Boon (it’s a Nigerian thing), but she couldn’t help but think that something was off about them. In the books she read, everyday life was portrayed as a fairytale, their protagonists thoughts were removed from the mundane concerns of getting paid, being stressed at work..etc.. Furthermore, she thought those books blatantly lacked any female agency. In Americanah, she wanted to create a more complex and real version of love, one that is messy and delves into female agency and desire.

In Americanah, Adichie was adamant about demystifying depression

It’s still taboo to talk about mental health issues in African and African-American communities and through her book, Adichie wanted to tackle some of the stigma associated with mental health. Adichie confesses to struggling with depression, it was thus important for her to write about the familiar feeling of hopelessness and powerlessness that at times washes over her.

“I think it is important to be honest about what it means to be human, that we are happy and we love but also we go through dark times. No one’s happy all the time,” she says.

Love isn’t about finding the one

Unsurprisingly, Adichie is against the idea of “the one.” She finds the notion that loves is supposed to complete you, erroneous. Instead, she believes that love should complement you.

“There’s an idea in the culture of finding the one, in which every relationship is a search for the one and I find it worrying because it means that you cannot be in a relationship and enjoy it for what it is. The one should be thrown out of the window, are men obsessed with the one? She says.