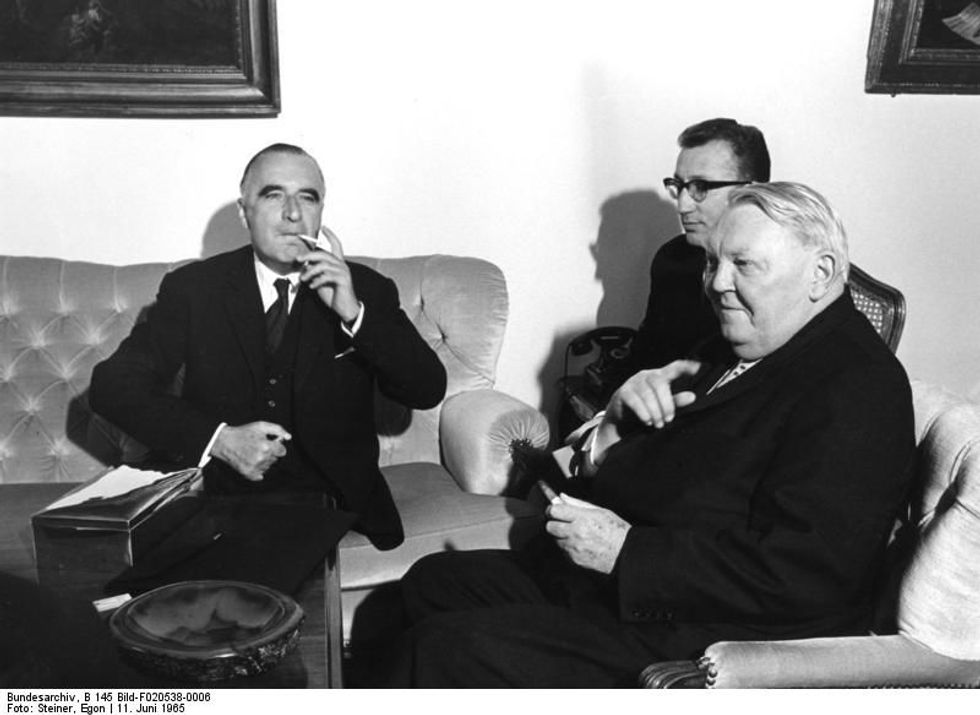 Macron's condescending remarks about Africa's civilizational problem and the 7 to 8 kids per women are part of French presidential tradition.

DIASPORA —A couple days ago a clip of French president Emmanuel Macron's G20 address made the rounds on the internet, suggesting that the West’s new liberal darling isn’t as progressive as people like to think.

Responding to the question: "How much money are G20 countries prepared to invest to save Africa?" Macron said: " I do not believe in this sort of reasoning" before launching into a standard answer of what he believes ails the continent. He hit a landmine when he characterized Africa's problem as "civilizational" and African women as having "7 or 8 children."

Many argued that while his views are condescending, they are no different than those expressed by other world leaders like Barack Obama or Hillary Clinton. Furthermore, French presidents have a long legacy of infantilizing Africa and Africans.

Below we've complied a brief historical overview of France's problematic dealings with Africa under key figures of France's V Republic.

Proud to be president of the Fifth Republic

In France, De Gaulle is revered as the leader who led the resistance effort against Nazi Germany. He is also the man behind this problematic statement:"Africa? It's simple I'll explain: It's black and it's crowded."

Under De Gaulle's leadership, France was focused on maintaining 'privileged' ties with its former colonies. He appointed himself head of a special "African cell" and his relationship with the continent was characterized by weapon deliveries, oil exploitation via the Elf oil company, and "friendships" with dictators.

George Pompidou's administration was a continuation of De Gaulle's policies. In 1973, he welcomed the first France-Africa Summit in Paris with the aim of securing France's geopolitical interest on the continent. Since then France has periodically been organizing these summit—the latest one was in Bamako late last year—who have played a big role in make sure France's maintains its foothold on its former colonies.

Valérie Giscard D'Estaing first seemed to break from his predecessors legacies, by championing the discourse of "Africa for Africans". This however proved to be nothing but a façade. Under his administration, France repeatedly intervened on the continent—namely in Mauritania, Chad, Zaire, and the Central African Republic—to "promote" peace. He later congratulated himself for France's peacekeeping efforts in an aggrandizing speech, declaring: "For France, to have had the capacity of ensuring peace on the African continent by itself, is a frank success."

Giscard was also entangled in various dubious transactions with African dictators, the most notorious being "L'affaire Bokassa", where he accepted diamonds and various gifts from Central African Republic's President Bokassa.

Mitterand's moto leading his African foreign policies was: "France will be present but will not interfere." That, however, did not stop France from providing military assistance to the Hutu led Rwandese army during the Rwandan genocide, as well as enabling Hutu genocidaires to flee to Zaire as the Tutsi liberation army took over Kigali.

Chirac was dubbed by the French press as the 'African' president. Championing development projects in Africa and defending African sovereignty while at the same time providing military aid to African dictators. Before becoming president, when he was still mayor of Paris, he spoke one of the most infamous quote on immigration:

"How do you want a French worker who's combined income with his wife his approximatively 15 000 francs, who sees in his low income housing apartment block, a family with a father, three or four wives, and twenty children earning 50 000 francs thanks to benefits. On top of that, if you add the noise and the smell, well of course the French worker goes crazy."

In a speech at Cheickh Anta Diop University in Senegal in front of a crowd of students, scholars, and journalists, Nicolas Sarkozy, had the nerve to declare: "The tragedy of Africa is that the African has not fully entered into history ... They have never really launched themselves into the future."

Sarkozy two terms in office, was marked by his intervention in Libya and his complex relationship with Muhammad Ghadaffi. Ghadaffi was received by the French presidency with honor before eventually being killed by Libyan rebels with the military support of an international coalition led by France.

François Hollande promised a break from French clientelism, a promise he followed through with. He however didn't touch on France's institutional hold on its former colonies. Hollande's presidency was also marked by his intervention in Mali to stop northern jihadists from seceding from the rest of the country and further destabilizing the region.