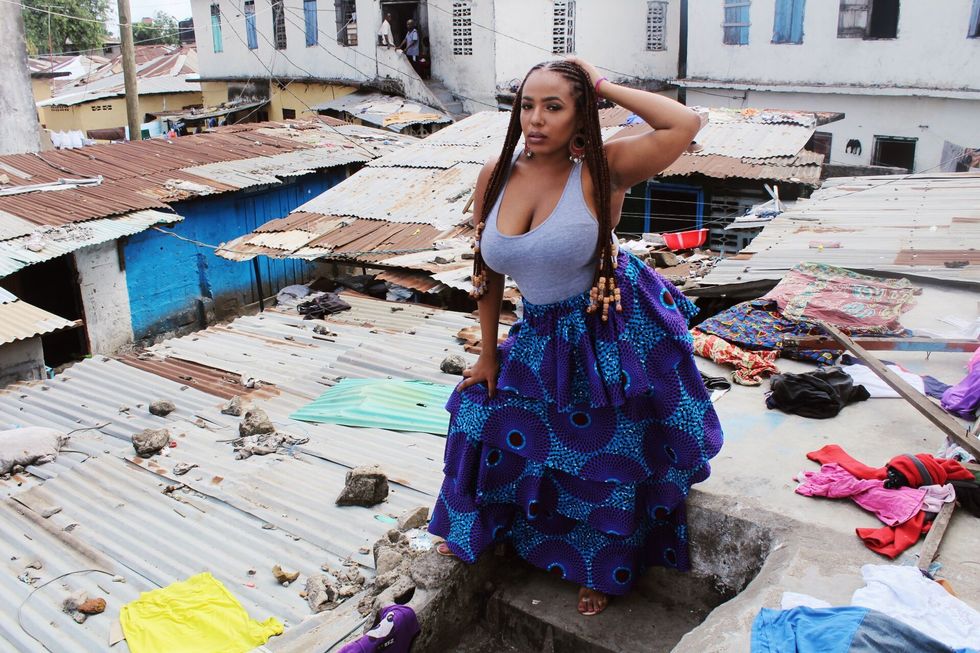 This designer of wax-print dresses employs Liberian women in Bombchel, her ethical fashion initiative based in Monrovia.

DIASPORA—Archel Bernard is the Liberian-American designer and social entrepreneur behind “The Bombchel Factory,” an ethically produced fashion boutique based in Monrovia, Liberia.

Each item in the store is handcrafted by members of an all-women staff as part of Bernard’s mission to fuse stand-out fashion with social action. Her vibrant sense of style is reflected in each design—she models most of the line’s collection of skirts, dresses and matching sets, herself.

Bernard is her own fashion muse and after viewing some of her airy summertime looks, you’ll understand why. Read on for our conversation with Bernard about the inspiration behind her socially-conscious fashion, and view some of her brightest and boldest looks below.

OkayAfrica: How did you first start designing?

Archel Bernard: Well, I moved to Liberia to be the West African Oprah Winfrey.

I've always wanted to be a lifestyle journalist and I thought that Liberia would welcome me with open arms. But, I got to Liberia and people did not care about lifestyle journalism, because it’s not that comfortable of a place to live yet. Where people are still fighting for life, there is no lifestyle. But, I was still suiting, I was like rainbows in my beautiful Liberian dresses because West African Oprah has to wear West African clothing.

I would put on my dresses and go out with a camera man into the slums and shoot videos, shoot market women, shoot whatever. I would post these videos online and my YouTube views didn't really go up like crazy, but people were always asking me "where can I get a dress like the one you wore?" Or "can you bring me one?" So, the business started out of necessity, less than it started out of wanting to be a designer.

Within a year I opened a store with a business partner, and we had to close down during the Ebola outbreak. I went to Atlanta and I didn't know what I was going to do with my life.

But after a while, I was like “okay I have to go back,” we have to do something bigger and better. I wanted to help other people break into fashion, similar to me. There are lots of women in Liberia who have goals like this, and maybe they don't have access.

So I decided to work with women, and build it up, in a way that's beneficial to the community around me. I had this boutique but, there was no end game, so it was like "what's the goal?"

I recognize that as a Liberian of privilege I have to do more.

AB: Well, I love fashion, yes. But I recognize that I'm a Liberian woman who has been privileged to escape the war, escape Ebola, I've been able to escape everything, and the reason that I've had such a comfortable seat is so that I can come back and lift others.

That for me is so important because, if not that then what? It seems selfish, I can't even picture not helping.

OkayAfrica: What’s the inspiration behind your latest designs?

AB: I started to realize that you can't just sell dresses, you have to sell the lifestyle. And at first when I would come to the States I would try to get customers, or I would try to reach companies and a lot of them said "oh, this is too African," but I'm sitting on Instagram and there's this whole movement of beautiful African women. People want to see this, it's a new look. I'm trying to bring that fresh lifestyle to everyone. So, my [designs] are just what I'm wearing to make it easy. I'm trying to communicate that there's an opportunity for glamor, there's opportunity for all of it.

Most of the stuff is not one size fits all, or two sizes fit all. I'm trying to communicate that through the new styles. We are also making a lot of our textiles in Liberia, because I'm trying to be stationed in Liberia as much as possible, so that I can help benefit the local economy with my clothing.

Fashion is so wasteful, and I find that if we just take a second, we can really lift others, we can spread really great styles and we can do all of this without harming our environment. I want to do all of that.

OkayAfrica: There are a lot of different designers using wax print, calling their styles African-inspired. What do you think sets your clothes apart?

AB: It's so funny because a popular market place started around the same time as I started, and they are like eight times what my sales are. You're going to compete with other people who are making similar things as you. But, it's like "okay, I'm over maxi skirts—everyone has their African print maxi skirt now. What else can we do?" I feel like we are limiting ourselves to just "I know that a maxi skirt can sell." But, what would you want to live in? What are the colors, and prints, and patterns that you would want to live in? That's what I'm trying to bring to the table.

I can wear the same dress if I wanted to be very glam and go for drinks, and I can wear that same dress to a wedding, or something like that and I can still breathe and eat, and it's not my grandmother’s suit where I'm so stiff that I gain a pound because I can't move around with this thick lining.

Even while we were talking, this woman stopped me and told me: "I worked in fashion, I love your batik. "A man, who is forty-five years old in Liberia, who has never left the country really—he made this batik. A woman who is an Ebola widow, who just learned how to write her name, she made the dress. These are the things that are important to me about fashion, not what Italian I can get my leather from. That doesn't matter.

OkayAfrica: Why do you choose to model your own clothes?

AB: I'm a size twelve or fourteen, if I'm honest, and I want everyone to know that they can look good in all these clothes. For me, it is so important to put myself out there and say "hey I'm not selling you anything that I wouldn't wear myself."

AB: Well, I just really think that people think that it's a trend. When I first got into it people were like "African print is a trend right now, what are you going to do when it’s not?” I'm just saying that people have not reached to Africa enough. In Liberia alone, there's not just wax print, there's the batiking, there's different things. We have country cloth, we have mud cloth that's imported, we have all sorts of different things that are made.

People are just now starting to see Africa as a place to go for something fresh in fashion. So, we are going to take advantage of that. It's not just a matter of only doing what's hot right now—what are these designers going to do with it? I'm not saying that I don't see competition, but I'm saying that we are a formidable force. Because, I want to see what these maxi skirts people are going to do in ten years from now.

How are we going to evolve? Because we can't just say "okay I'll make this and I'll make it forever." No, people are going to want something fresh or you're going to die out. But, lucky for us, the continent offers so much inspiration that we shouldn't have a problem.