A History of Drake's Uncomfortable Obsession With Sade 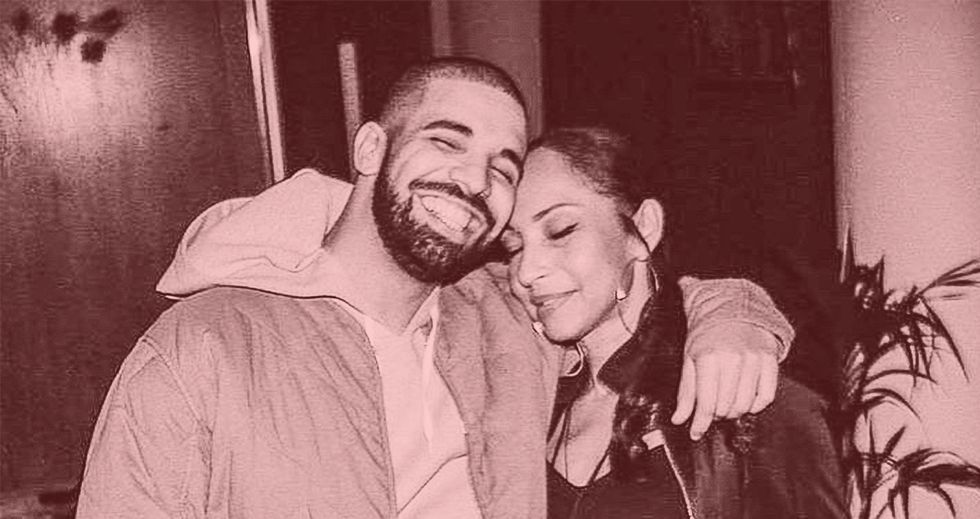 We all love the British-Nigerian icon, but Drake manages to take it to a whole other level.

Drake is obsessed with Sade.

If Drake were Rose and Sade were Jack, he would never have let go. If Sade needed a kidney, and Drake had just one kidney, Sade would be the recipient of a kidney from Drake.

His unbending admiration for the British-Nigerian legend, is common knowledge at this point, but his latest display of this affection takes all the trophies. Each and every single one.

On Wednesday, Drake's Belgian tattoo artist Inal Bersekov posted the rapper's second—that is correct, he has more than one—tattoo of the legendary singer. Drake's latest ink—plastered across his torso—features a portrait of Sade, a top another portrait of Sade, a top an inscription from Sade that reads "with love Sade x," before a backdrop of palm trees, ocean and clouds.

I mean, most living beings love Sade, so his admiration is understandable, but isn't buying her albums or seeing her live in concert, enough? The rest of us seem to think so, but for Drake, it's never enough. The rapper is eternally, continually, repeatedly, incessantly, perpetually, and on every possible occasion, doing too much. By getting this series of Sade tattoos inked on his ribs, like he does not know what permanent is, he has only further confirmed this already established truth.

But to be fair, Drake's past interactions with the singer have foreshadowed his most recent showing of his fixation with her. His intense love was first documented back in 2010 ahead of the release of his debut album, Thank Me Later. “Her brand is so strong and she's such an amazing woman, but the melody she chooses to use and her voice has that dark, sexy feel that a lot of So Far Gone has," he told MTV News.

He went on to coin a term for his musings on Sade. "'Lust for Life,' the 'Houstatlantavegas,' 'The Calm'—those all remind me of 'Sade moments,' he continued. "I'll call them 'Sade moments,' where you hear it, it hits you, and you feel something. When Sade's 'King of Sorrow' comes on, you feel it, consistently. So I just want to try to experiment and see if there's a way to bring her into the hip-hop world. I'm kinda scared. I don't want it to be that moment that everybody's like, 'Whoa, that shouldn't have happened.' So it's really got to be calculated for the right moment...hopefully there will be a great Drake and Sade record for people to listen to, and hopefully it'll be one of the best decisions I've ever made."

Sade was not featured on Thank Me Later—later stating that she was not contacted by his team— but Drake sampled her song "I Will Be Your Friend" on his single "Free Spirit," released in the lead-up to the album.

Earlier this year, Drake revealed that Sade chose to feature Jay Z on the 2010 remix of "The Moon and the Sky," instead of him, which seemed to only fuel his passion. “I was this close to being on it," he said during an interview with Cal Cast, when recalling another "Sade moment." “But my star wasn't there yet for her to hear me out."

Despite the initial disconnect, Sade has warmed up to Drizzy over the years, and might have actually become an enabler.

On Drake's 30th birthday last year, the singer sent him a signed photo of her "Babyfather" single cover. He took to Instagram to share a picture of the gift, with the caption "Woke up to see the most beautiful woman ever in my house."

Pictures of Drakes first tattoo of Sade's face surfaced in March when Swedish tattoo artist Niki Norberg shared the work he had done for Drake on his Instagram page.

Last month, the notoriously elusive Sade, showed up to Drake's London show, and the two posed for a few quick snaps along with the rapper's mom. I can't even handle how iconic this moment was, so it's a wonder how Drake managed to keep his shit together during their interaction. He captioned the photos "two very important ladies in my life" when he shared them on Instagram. However, after rearing him and instilling in him the work ethic to become the multimillion dollar-earning entertainer that he is today, I'm curious as to how Drake's mother feels about Sade being put on the exact same pedestal as her. But that is truly neither here, nor there.

And that takes us to the here and now. Drake is now the proud wearer of two, lifelong portraits of Sade. We should have known it would come to this, but still, this whole thing manages to still be slightly surprising and, mostly, wonderfully ridiculous. One Sade tat couldn't suffice, Drake? Is it by force?

This exercise in examining Drake's over the top-ness is not all about throwing shade though. On the flip side of being completely weirded out and amused by his antics, I also respect the man's dedication and soaring level of apathy about what people think or say about him. After all, love is stronger than pride.