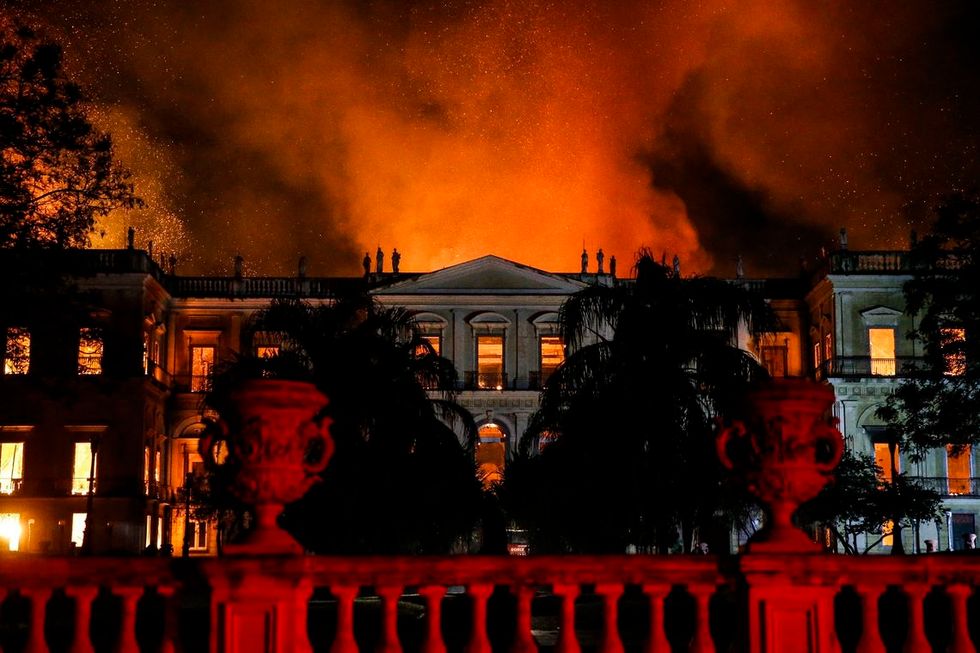 Among the destroyed pieces were hundreds of irreplaceable items that told the story of Brazil's rich African heritage.

The fire that destroyed Brazil's National Museum on Sunday, September 2 also destroyed the country's only archive of artifacts on the history of Africa. The African and Egyptian collections of more than 1400 pieces were the largest in Latin America.

Located in Rio de Janeiro, Brazil's National Museum was one of the largest natural history museums in the world, with more than 20 million pieces in its archive. On Sunday, a fire ravaged at least 90 percent of this collection. Its 200-year history goes back to the early 19th century when the museum's physical structure served as the home of Portugal and Brazil's royal family. The collection focused on the natural and anthropological sciences, as well as ancient peoples and civilizations. Its most prized possession was an 11,500-year-old skeleton called Luzia—the oldest human fossil found in Latin America. Brazilians hailed the museum as a democratic institution that attracted visitors from all social classes—a rarity in Brazil.

Luiza, the oldest human fossil found in Latin America.Image courtesy of The National Museum of Brazil.

"When I saw the museum burning, I felt so powerless as a citizen and as a historian because we are losing the history of humanity and of this country," said Valdemar Vargas, a teacher and adamant supporter museum who used his personal Facebook page on Sunday night explain what Brazil lost in the fire. "Something like this usually only happens to a country in times of war."

The museum's permanent African exhibit was named Kumbukumbu, a Swahili word used to represent people, objects and experiences that make people reflect the past. A throne from the Kingdom of Dahomey (current-day Benin) and Afro-Brazilian religion (Candomblé) ritual objects were some of its most prized possessions. Out of 700 items in the African collection, nearly 185 items were on display.

"Brazilians hailed the museum as a democratic institution that attracted visitors from all social classes—a rarity in Brazil."

According to Mariza Soares, director of the African collection, the exhibit was effective in valorizing African culture and raising discussions about the race relations in Brazil.

"It was an incredible opportunity to recover a whole discussion about race relations in Brazil and the importance of studying the history of Africa to understand Brazil, to discuss the issue of slavery and how it negatively impacts Brazilian society," said Soares, who confirmed that the entire collection had been destroyed on Tuesday.

When the museum opened in 1818, its collection included items from Africa. In the early 19th century, the Kingdom of Dahomey was one of the biggest suppliers of enslaved Africans to Brazil. Rei Adandozan, then the kingdom's leader, gave Brazil's D. João VI several gifts, including a royal throne and sandals. These artifacts are considered important records of the kingdom which became non-existent after being taken over by France in 1904. Other pieces in the collection included Alaka fabrics, made on the west coast of Africa in the first half of the 20th century, and an ivory tusk carved in the Congo River Basin in the 19th century, noted as one of the largest ever exhibited in a museum.

Dahomey Royal Sandals.Image courtesy of the National Museum of Brazil.

The museum's Candomblé items were physical reminders of the resistance of Africans and Afro-Brazilians against constant religious persecution. The Afro-Brazilian religious houses in Rio de Janeiro were always being persecuted and many had their religious items confiscated by police. Many of the Candomblé items were recovered from Rio de Janeiro police at the end of the 19th century by Ladislau Netto, the museum's late 19th-century director. Thus, the museum's collection preserved wood and metallurgy techniques used by Africans and their direct descendants to create religious items. Another former museum director, Heloisa Alberto Torres, collected religious items from Candomblé houses in Brazil's Bahia during the mid-20th century and donated them to the museum.

Candomblé objects included a mirror used in celebrations of the Oxum Orisha, as well as dolls of the orishas.

Candomblé mirror used in celebrations of the Oxum Orisha.Image courtesy of The National Museum of Brazil.

With 700 pieces, the museum also housed the largest Egyptian collection in Latin America. In 1826, Dom Pedro I, the first emperor of Brazil bought a lot of Egyptian artifacts and donated them to what was then the Royal Family museum. His son, Don Pedro 2, traveled to Egypt in 1876 and was gifted a mummy and coffin of Dama Sha-Amun-em-su.

For Vargas, one of the biggest popular losses of the museum is its Egyptian collection. In his dozens of visits to the museum with kids, Egyptian mummies impressed them the most.

"Most of these kids will never leave Brazil to visit the British Museum or the Louvre," Vargas said. "The museum gave them the chance to see a real mummy from Brazil and an opportunity to explore the world without leaving Brazil."

The Egyptian collection included a large number of stone slabs with rare names and titles, statues of historical significance, very beautiful and well-crafted coffins, and hundreds of shabtis. Other objects in the collection included various mummies (human and animal), papyrus, bronzes, lytic and prehistoric ceramics, amulets, and even some Nubian objects.

The museum also had the oldest skeleton found in the Americas--Luzia, as she was named. Luzia was found in the 1970s in a cave in the interior of Brazil. A simulated replica of her face was interpreted by many as having "negroid features." In recent years, Luzia had become a symbol of survival and resistance for young Afro-Brazilians.

Candomblé Doll from 1940s Bahia. Image courtesy of The National Museum of Brazil.

The palace was likely built with the labor of enslaved Africans and Afro-Brazilians. Before the Portuguese royal family moved into the house in 1808, it belonged to Elias António Lopes, a merchant who became rich off the slave trade. Over the course of seven decades, the royal family added two floors to the original edifice. Brazil officially abolished the transatlantic slave trade in 1850 and slavery in 1888.

When a fire started in the back of the building on Sunday night, firemen arrived soon after only to find the closest fire hydrants without water—a cost-saving measure implemented by the institution. Brazil's education and cultural institutions have suffered significant funding cutbacks implemented by the national government in the last three years.