A Tribute to the Late Apartheid Struggle Veteran, Winnie Madikizela-Mandela 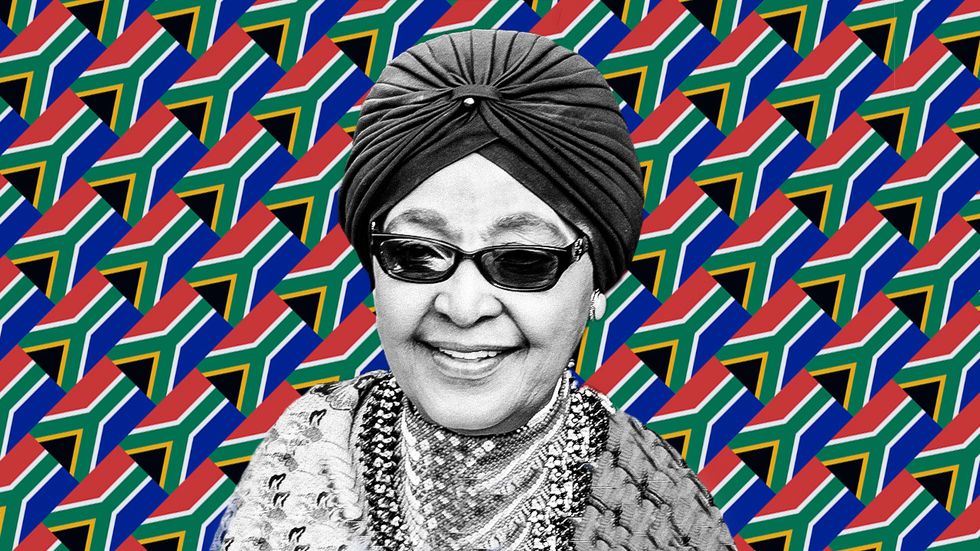 Reflections on the great legacy of Winnie Mandela, "Mother of the Nation."

After battling a long illness, Winnie Madikizela Mandela, Mother of the Nation, passed away this afternoon at the Milpark Hospital in Johannesburg surrounded by her loved ones. Her death has left the entire country in mourning.

When many think of Winnie, they think of her former husband Nelson Mandela. And while this is true, Winnie was her own woman and a fiercely passionate one at that. Though she may not have been imprisoned for 27 years or become president of the ANC, without her contribution and continued work during the apartheid struggle, this country would not have achieved what it eventually did in 1994.

When Winnie met Nelson Mandela as a young woman, she couldn't have imagined at that point in time, just how drastically her life would change. And when they eventually married, it was clear that the man she loved, loved politics and his country above all else, but she grew to understand this—difficult as it was. She and her children endured the numerous arrests and imprisonments, and the long periods he spent away from them as a result of his political activities within the ANC, which had been forced to operate underground. Perhaps this was all to prepare her for the biggest blow that would eventually come: the infamous Rivonia Trial which resulted in the imprisonment of Nelson Mandela on Robben Island for close to three decades.

And it was during Nelson's imprisonment that Winnie kept the fire burning. She kept the hope alive among the people of this country when it seemed like all hope had been lost. Many leaders within the ANC had been forced into exile for fear of losing their lives, murdered or imprisoned alongside her husband. Winnie continued leading protests, gathering South Africans together and continuing the struggle despite the apartheid government's impassioned efforts to suppress it. I recall an interview I watched wherein Winnie spoke of how it was lonely at times to have to raise her fist in the air and shout amandla by herself. She spoke of how those were dark and frightening days, but she did not judge anyone who had not stood with her at times. She understood the fear they had was the same fear that she felt herself.

There was even a time when Winnie was forcibly removed from her home in Soweto and exiled to a small town called Brandfort in the Free State province. Winnie was Xhosa and the community in Brandfort were predominantly Sotho. The apartheid government had hoped to put an end to her political involvement because of the language barrier that would be presented to her, however, they had once again underestimated her. Within a short space of time, Winnie Mandela was back at it, mobilizing people within the community. She had gained their trust and went on to address a political rally not long after. Winnie was a figure of stoic defiance. She was immovable, unshakeable and committed to seeing the liberation of her people even if that meant putting herself in the line of fire time and again.

However, after the release of Nelson Mandela in 1990 and he and Winnie's subsequent divorce, rumours started circulating, claiming that the divorce had been caused by Winnie's implication in the murder of child activist, Stompie Seipei, allegedly because she believed Stompie was a police informer. Although Winnie maintained her innocence with regards to Stompie's murder and Jerry Richardson, the coach of the Mandela United Football Club (founded by Winnie), was ultimately charged with the murder, it somewhat blemished her reputation in the public eye. While many have postulated that it was an attempt on the part of the apartheid government to discredit Winnie (I certainly do) and have her wrongly imprisoned, others remain unconvinced and believe that she was responsible for Stompie's death. Unfortunately, we can never really know the truth.

Fast forward decades later and I recall, during #FeesMustFall, when so many were condemning students for their protests against fee increases at universities across the nation, Winnie stood with us. She called out the ANC and their failures and refused to abandon the black children as so many of her comrades had done. I will never forget that. None of us as students will ever forget that or what it meant to us.

And so this is a tribute to you, Mother of the Nation. Indeed it was as long a walk to freedom for you as it was for your male comrades. We acknowledge you, honour you and send you off to finally rest. Lalangoxolomama. Rest in peace. Rest in power.