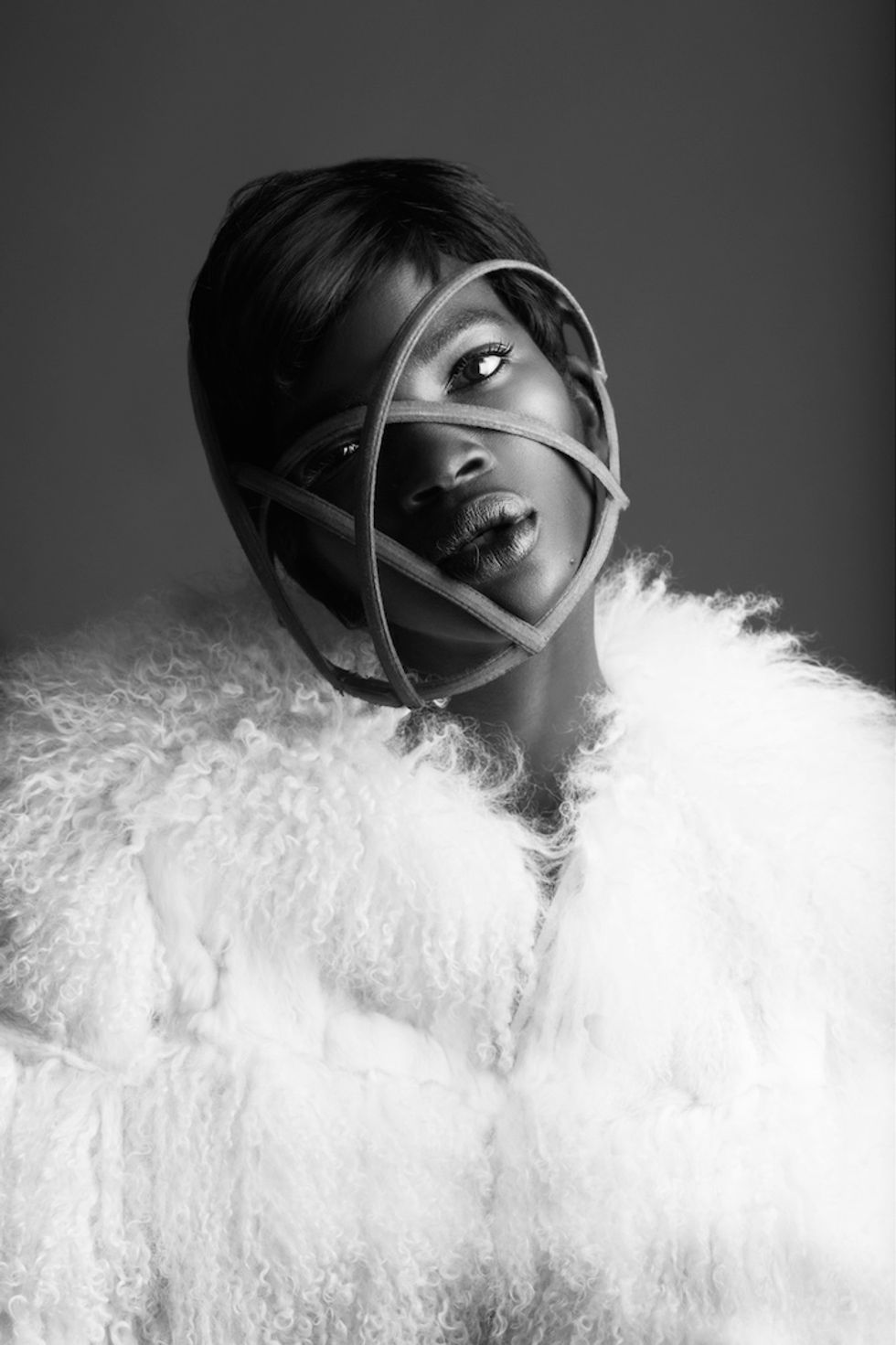 Exclusive photos shot by New York-based fashion photographer and creative director Remi Adetiba, one of the judges who discovered Aamito on Africa's Next Top Model Season 1

Ugandan model Aamito Lagum skyrocketed to fame last year after winning the very first installation of Africa's Next Top Model. Since then, she's walked in high-profile runway shows for Top Shop, Burberry, Paul Smith, Marc Jacobs, Rag & Bone, Lacoste and a slew of others. Her personal highlight? Securing the much sought after opening spot at Balenciaga's A/W 15 show. As an African model, walking for South African designer David Tlale was another exciting moment for Aamito. "It's a promise of things to come," she told Okayafrica over email. "I believe that African designers will be able to in the future contribute more to the global fashion industry and set trends from the runway."

It's hard to take your eyes off the luminous beauty - her jaw-dropping editorials for British Vogue, Elle Magazine South Africa, WSJ Magazine are nothing short of spectacular. With the road to stardom paved with so much success so early on, what does Aamito consider to be her greatest career achievement? The 22-year-old compares her work thus far to music, explaining, “I consider my career milestones to be a grand crescendo: with the next being greater than the last. That said, I would love to think my latest showcase is always my greatest.”

Now a seasoned model, there is no doubt that the 5'11 star is set to be one of the biggest names in the fashion industry. A true global citizen, she regularly jet sets around the world working in New York, Milan, Paris and South Africa. She credits her close circle of friends for helping her to stay connected to her Ugandan roots. "I'm really lucky that I have friends that keep me down to earth and make sure I'm up to speed on the latest slang and gossip,” she says with a laugh. "But if I'm feeling homesick I get a little deeper and look up my favorite Ugandan music on YouTube or I run around the East Village markets looking for traditional ingredients and cook up a storm." She says that Eddy Kenzo's "Sitya Loss" and Amaru's "Stay" are two songs by Ugandan artists that you might catch her humming, while peanut sauce with plantain is her favorite Ugandan dish she spoils herself to in New York. "My culture has whipped the best meals out of the peanuts thrown at them," she tells us.

Aamito says she also binge-watches Ugandan vloggers. Comedian Anne Kansiime is her favorite. "She chose to be herself in an industry where everyone was trying to be the best of someone else," Aamito tells us. "Plus, she started from the bottom; gathering giggles at small parties and moved to a level one can’t laugh about. She is self-made and self-aware."

If Aamito is our captivating princess then her fairy godmother is no doubt Oluchi Orlandi. "Oluchi was my golden ticket into the Chocolate Factory," Aamito tells us of the Nigerian supermodel and TV personality. "Even before Africa’s Next Top Model, I had gotten to learn her story, and she embodied the struggle of many an African talent; me inclusive. It was when I heard that she was coming to a country next to mine [Kenya] for auditions that I knew it was my closest shot." As the host of Africa's Next Top Model, she often imparted wisdom to the contestants during the duration of filming. Aamito recalls the best advice she received from Oluchi: “One of the toughest moments on the show was when I was down on my morale and Oluchi walked up to us and said 'what are you doing here? [The reality show] is a simulation of what the fashion industry is...it's tough. It is never going to be easier than this. Are you able to look past today's sweat? If you are, then that is what will you make you stand out.'”

Aamito is having a moment and then some. While the African community at large toasts to her success, no one can claim to be happier for Aamito's ascent than her mother. "[My mother] has seen me learning to walk," Aamito tells us. "She was there for my first photoshoot in which the only label I wore was my baby smile. It's not that she just sees my pictures; she HAS to see my pictures. She is prouder than anyone else can claim to be of me. She gets to see some clips of my walks though. Having given so much into making me who I am today, she cannot be any prouder."

In just a little over a year, Aaamito's cast a spell on the fashion industry, and this is just the beginning. What keeps her motivated in the often tumultuous modeling world is not surprisingly her drive. “I have always been an ambitious as a person but the difference is I don't just dream, I do.”