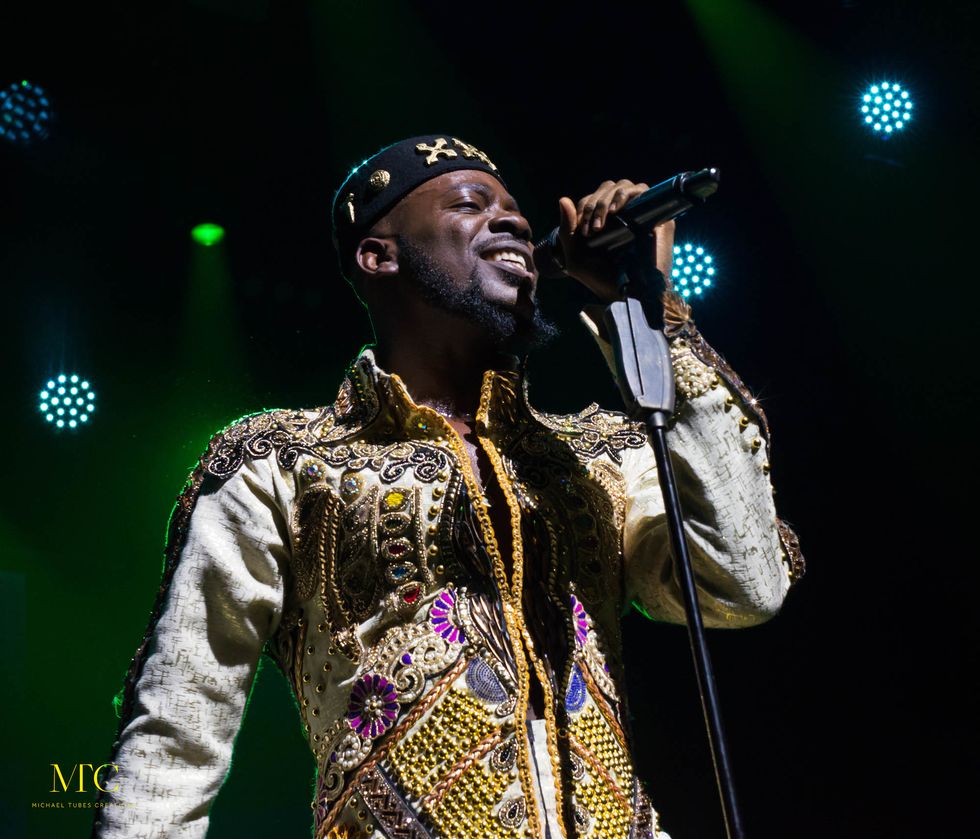 We sit down with the Nigerian artist for a wide-ranging interview about his London O2 concert, his two albums, and his philosophy & growing fame.

In both music and public persona, Adekunle Gold is measured, thoughtful and engaging. In person, a strong current of resolve and self-belief emerges, one that doesn't belie his image but in fact reaffirms these qualities that have made him a much-loved musician and personality, now more than ever.

"I still find myself convincing people that I have something" says Gold at his lodgings in London Dockland, the regenerated riverfront and once the largest port in the world "after that show I said,'You know what? I'm done.'"

He was speaking in June, soon after his triumphant Adekunle Gold + 79th Element Live in Concert at London's O2, a weekend of Nigerian highlife music that also hosted a headline concert by Sir Shina Peters, Nigeria's top proponent of pop-juju who first found fame in the early 1990's. Gold sold out the "restricted capacity" of Indigo's concert hall and drew from his latest albumAbout 30 and 2016 debut Gold for his set. Guest appearances included Simi and Dyo and Gold was backed by a seven-piece band that included celebrated guitarist Femi Leye, a hype-man, and hypewoman Adekunbi Kosoko who is also the artist's sister.

Triumphant, and also relieved from the tyranny of personal and public expectations, Gold is a revelation in this wide ranging interview about his concert, two albums, philosophy and growing fame.

Congratulations on the selling out of the concert at the Indigo at O2 and for a well-received show. How does it feel?

It feels good to have a dream, and then see it come through.

When did you decide to headline a concert at Indigo, and what was the first thoughts or situations that informed the decision?

It was in 2016 that I knew I wanted to do my own headline show. I did one in 2017 and sold out O2 Academy Islington and then I said, "Okay, let's take it to bigger heights, let's do it times four," and then we did O2 Indigo and it's big for me.

My team we put this together and I reached out to the dancers here, shout out to Kaffy from Nigeria, the biggest dancer. She put dance videos together and then the costumes. She directed how it was supposed to be on stage and everything, and then my band of course. Me and my band, we've been rehearsing for a year for this show—a year. This show won.

Who you think are the great Nigerian highlife musicians?

Ebenezer Obey is number one definitely and then we have Bright Chimezie. In the new generation we have Flavour. I love these three brothers.

I asked myself "so my twenties just passed like that? What did I even do, you know?" I was thinking "Did I live? Did I enjoy?" And somehow, I remember that I was always regretting that I didn't do enough at some point, but then I remember the things that I did that got me here and I'm like, "I think I did pretty much very well."

I think you did amazing.

Yeah, so it feels good to finally be 30 (now 31 years old) and be proud to say it because, yeah, I'm happy and I am responsible for everything that I do. I'm getting closer to my dreams daily. And with 30 comes a little more responsibility and a lot of life to live. So it, it feels good.

How did you celebrate turning 30?

It was pretty fun. I went to the beach—that's my favorite place in the world—with my friends. We stayed over the night and it was really, really amazing. We did a lot of fun stuff. I love to kayak so it was a beautiful one—the kayaking, swimming, games and a lot of things.

Do you consciously think about making timeless music?

I do. I don't have to lie, yeah I do. Because sometimes I want to jump on trend. The trend is very enticing but then, I think about it, this music, these songs are disposable waste. I mean one to three months they are gone and that's it. And then the ones I'm making, people still talk about it till tomorrow. I still make money from "Orente " (2016). People still get me to come to perform "Sade" (also 2016) which still plays on the radio until now. So, yeah I make conscious effort to meet timeless music, because the goal is to be timeless and it's not easy to do that.

Are you content with your music being called "highlife?

I don't think I want to say I have genre any more. But then, I think the most established thing is that I make popular African music. But the thing is I will put myself on every, any kind of sound. The difference "Call On Me" has is the music, but it's still my vibe basically and then if you watch the video it's still me so. I will work in my own form, but then I make sure that it's something that would represent me.

I think that also applies to "Original Gangster".

Thematically and musically, what was your thinking and intention when making About 30?

Okay so, I planned About 30 when I was writing Gold (2016). If you notice how I did my track list, it starts from 17 and that's intentional. Gold ended at 16, About 30 starts from 17. I wanted to create the whole experience of my life through it.

With About 30 I took it up a notch. I have afrobeat proper with Seun Kuti. I have more pop sounds, one is "Down With You" with Dyo. I have "Surrender" which is very pop. And then there's "Remember" and "There is a God" with a choir. This one I try to spread a bit more and I featured more people, like four people; and then we re-mixed "Ire" featuring Jacob Banks.

Do you play any instruments?

The guitar is the one thing I'm learning so far, because people assume I play with the way I write. I spent the most part of my life learning how to understand my voice. So, I didn't have time to learn, I wish I did.

I'm actually glad you told me that, because it would be interesting to hear how you found your voice.

I think I was going to participate in Project Fame and I spent a lot of time trying to understand my voice so I was always singing. I became more confident to even enter the competition and get as far as the audition. So since then, I was confident.

I sing every day. So with that I learn, you know how some, before they go on stage, they don't talk, they do slow moves and everything. I don't say it's not good but, I don't do any of that, because I feel like, I do it everyday anyways. I sing and I'm not a coward that I need preparation to be able to sing now.

No special waters or fruit mix?

No, I know it's bad but I'm not even going to be like other artists that will say, "don't drink cold water." Bro, I drink anything. But I feel like because I sing every day, my voice is prepared anyways. I can work two hours, three hours performing on stage.

Was About 30 recorded in in one place or studio?

Does being high-up in a plane do something for you?

It does, because that's when I get to write. That's when I don't get to press my phone. If I fly in a plane and there's WiFi, that's a problem. I can't write. The plane is where I have moments where I'm by myself. Even if I have company, there's only so much you can say. I want to write, I want to think.

Who do you think has the best live act in Nigeria?

Can I tell you why not? I saw Sir Shina Peters' concert in the same O2 venue and two days after yours.

We make songs together, we put "Money," "Damn, Delilah," "There Is A God" and "Mr. Foolish" together. I made this album pretty much with the band and the producers. Shout out to every member of my band, they are superstars. And there are some of them that are artists in their own right like Femi Leye who is a superstar. We're doing this for life.

Jacob Banks gave the remix of "Ire" a real charge. Why did you choose him for the remix?

I wanted something different in that song, I didn't know the recording could even sound better. I've been at his concerts, I've been to his shows and he's pretty amazing. I've seen him live, I listen to his music a lot of times. I love his voice, I love the emotion in his voice, and I kind of wanted somebody to give that emotion and put all that in the music.