App Appeal: How One Young Nigerian Couple Has Survived the Cut-Throat World of Tech 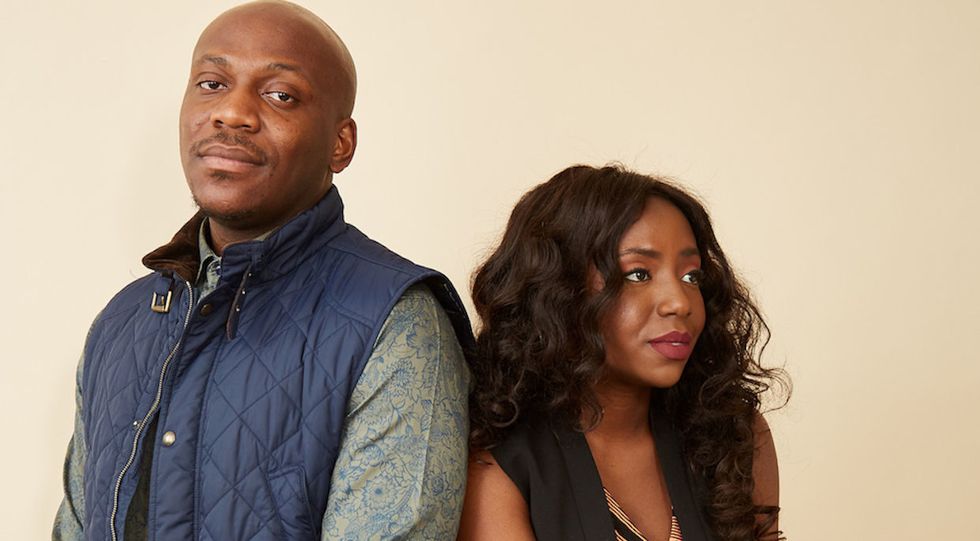 We spoke with the founders of fashion-concious app, Cosign, about how they've managed to stay afloat in the increasingly competitive world of app development.

NEW YORK CITY—It ain’t easy being an app developer—not a successful one at least.

With over 2 million applications, competing for the attention of picky consumers with ever-changing needs and interests, maintaining an app that’s fresh enough to prompt continued use—and prove worthy of storage space on our phones—is no easy feat. Even with strong ideation and backing, some apps never make it past conception.

It’s a cut-throat game by definition, and even more vigorous for black tech workers who make up less than 9 percent of the industry in the United States.

As the founders of the fashion-conscious digital app, Cosign, Esosa Ighodaro and Abiodun Johnson are not only amongst this leading 9 percent, but the young couple—who got together after meeting in a Subway station, where Johnson complemented Ighodaro on her outfit—are also part of a select group of software engineers and developers who have managed to keep their app afloat in tough waters.

Cosign, which is “the first app to make products in your photos ready-to-buy, turning your social media followers into customers and your style into a way to earn cash rewards,” launched in 2015 with funding that the couple received from family and a successful Kickstarter campaign. Three years later, the app continues to expand, adding to its already long list of brand partners, which includes Sephora, Forever 21, Macy’s, Neiman Marcus and Ted Baker, to name a few.

Running an app effectively is an ongoing process, and the couple has seen some very promising results over that past few years, but it hasn’t always been smooth sailing. Ighodaro and Johnson raised the initial funding for their app with the help of generous family members and a successful Kickstarter campaign, which raised $41,000 in 30 days. This money helped support a “soft launch” of the app in 2015 and an official takeoff is set for later this year. The couple ran into a major roadblock around year two. “We had some difficult times a few years back,” said Ighodaro. “We had to raise money again, but there was a period when we just stopped working because there was just no money available.”

As, Ighodaro puts it, securing money that will last, is a crucial first step in maintaining a profitable app, but it’s far from the only step that matters. Keeping a startup alive is an exercise in patience and durability as well. “You also have to feel encouraged, and not give up easily,” says Ighodaro. “Make sure you figure out if your [business] partner will be there for the long haul and motivate them.”

They eventually raised enough money to continue their work, and this was the confidence boost that Ighodaro needed.

“It’s a radical act when you decide to take this journey to do something you love, and you will be rewarded for it someday."
“When we got people, who didn’t know us, to actually invest in us, we were able to raise money and do the work, when we got that investment, people saw us as leaders. Around year 3 we felt that it was real, when someone took a chance on our potential.’

Now, it’s all about remaining motivated 150 percent of the time.

“Make sure that developers are motivated, to work there. Keep your employees happy, figure out how you can achieve small wins along the way to keep them compelled and excited about your project,” says Ighodaro.

“You also have to be self-motivated every day. Figure out what keeps you excited and encouraged. For me, I have to pray, for energy, for strength and for a smile on my face. Set goals and figure out what you can do about what you have control over, which is yourself.”

Johnson and Ighodaro have both made Cosign their life's work—this level of dedication is required if a startup is to thrive and survive. Besides, Ighodaro has too much vested in the project for it not to succeed. “My mother. I have to make sure that my mom doesn’t work anymore, she’s my heart. Secondly, I owe people money,” she quips. “Also, I feel fulfilled working to fix the problem that we’re trying to solve.”

“Try to use other people’s success stories,” she adds, “if they can pull through, so can you. I’m big on motivational speakers like Eric Thomas and self-help books by people like the marketing guru, Seth Godin.”

Being black and in tech is revolutionary in itself. Choosing to follow that passion through, even when the statistics are discouraging, is groundbreaking. “It’s a radical act when you decide to take this journey to do something you love, and you will be rewarded for it someday. People will appreciate it. You have to feel a sense of purpose.”

Becoming a major player in the app world, is a mission, but it’s not out of reach for those who are truly hungry for it. It’s a love thing that requires an unbending commitment to the grind. “As long as I am still breathing,” says Ighodaro, with jovial conviction, “this thing is going to happen.”

This feature is in conjunction with our May editorial theme, Silicon Africa, where we’ll be looking at how Africans are using digital technology to transform their lives—from tech entrepreneurs and inventors to the people and places making the continent a place for innovation and expression.