They did it for the culture.

The 2018 Winter Olympics have undoubtedly been a monumental one for African athletes.

Several national teams from across the continent made their triumphant Olympic debuts, challenging years upon years of white domination at the games. These athletes hail from Eritrea, Kenya, Nigeria, Ghana, South Africa and more.

These athletes had won the games, even before any medals were awarded, solely based on the fact that their achievements have broken ground for future athletes from the continent.

On Tuesday morning, the Nigerian Women's bobsled team, led by Seun Adigun and Akuoma Omeoga became the first Africans in history to compete in the bobsled competition finishing in 52.1 seconds and landing in 20th place in Heat 1. Enthusiastic supporters from across the globe rooted for the team as they wen on to make Olympic history.

They'll compete again tomorrow in a second round of competitions.

Nigeria's first ever skeleton racer, Simi Ageagbo made her Olympic debut last week as well, finishing in 20th place after competing in four heats. She made the trip to Pyeongchang just four months after picking up the sport of skeleton racing. She'll go down as another African athlete who's helped make winter sports that much more accessible for black athletes.

"Ultimately, my journey is about breaking down barriers for future generations of athletes—especially young women everywhere—who are watching athletes like me push the limits through sport during the Games," said Adeagbo afterwards.

OkayAfrica got the chance to catch up with the athlete ahead of the games. Learn more about her story below with the video "60 seconds with Simi."

The same can be said for Ghana's first skeleton athlete, Akwasi Frimpong, who competed last week, finishing last overall, but leaving a huge mark on the sports world nonetheless. Revisit the talk we had with Frimpong just ahead of his first race, where he discusses his transition from track athlete to winter sports trailblazer.

"Everybody has their own story. I am just grateful I didn't give up. I just hope a kid in Ghana sees me sliding today and they will go after their dreams as well," the athlete told ESPN following his race. "They need it, I need it." 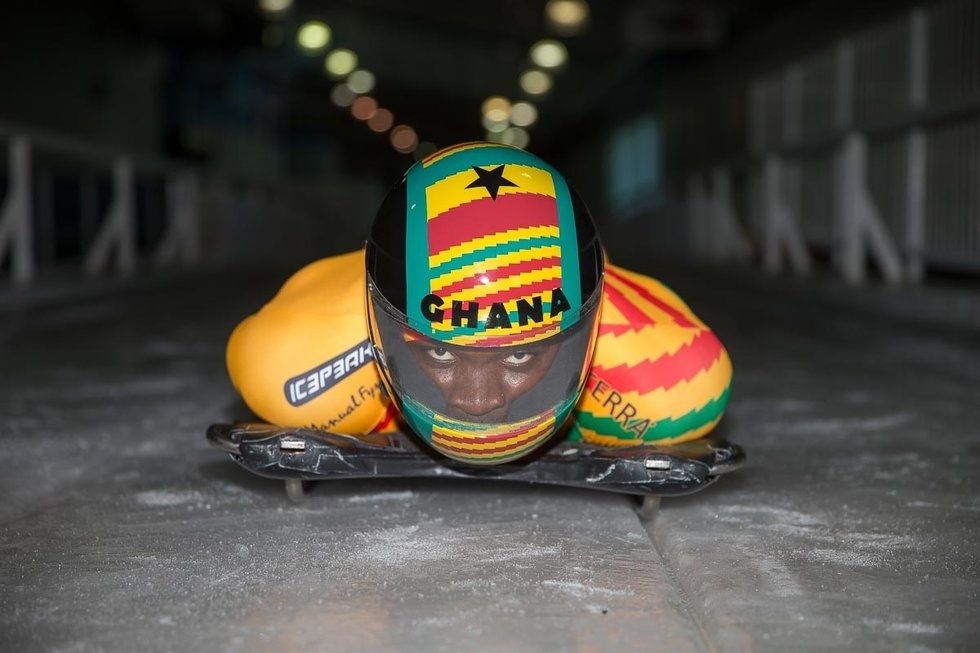 "For Eritreans, they're very happy when they see something positive about Eritrea, considering there was a 30 year war of independence," said the athlete, speaking with Global News Canada.

"I think it would be good for me to connect with the youth there and try to promote sports regardless if it's a summer or winter sport."

Sabrina Simander, the first Kenyan woman to compete in the Winter Olympics, and the second Kenyan ever to compete at the games, finished 38th out of 44 in speed skiing. The 19-year-old athlete, who grew up in Austria, has been skiing since the age of three.

"It was pretty cool and amazing to be at my first Olympics at 19 years. I felt really proud and enjoyed it. It was a big deal for me," she told Capital FM.

She, along with the several other African athletes who participated in the Olympic games, wants to giver back to her community in a meaningful way through sports.

"I am ready to share my experience with other Kenyans who are willing to take up winter sports. There are lots of experiences I have picked up from the Olympics and lessons I am certainly hoping to share," she added.

Congrats to all of the history-making African athletes who conquered the Winter Olympics this year.

Chioma Rowland, the fiancé of star Nigerian musician Davido, has tested positive for the coronavirus.


The artist shared the news via Instagram on Friday, writing that he and 31 people on his team decided to get tested after returning back to Lagos from abroad. While he and the rest of his team received negative results, Rowland's test came back positive.

"Unfortunately, my fiancé's results came back positive while all 31 others tested have come back negative including our baby," wrote Davido. He added that they both showed no systems, but would be self-isolating as a safety measure.

"We are however doing perfectly fine and she is even still yet to show any symptoms whatsoever. She is now being quarantined and I have also gone into full self isolation for the minimum 14 days," he added. "I want to use this opportunity to thank you all for your endless love and prayers in advance and to urge everyone to please stay at home as we control the spread of this virus! Together we can beat this!"

Heavyweight Ghanaian-British producer Juls shares his first offering of 2020, and it does not disappoint.

"The song dubbed "Soweto Blues" is a song depicting the love, sadness and fun times that Soweto tends to offer its people," read the song's YouTube description. The video premiered earlier today on The Fader. "The energy is amazing, the people are lovely and I've found a second home — especially the vibrancy of Soweto," the producer told The Fader about his trip to Soweto for the making of the video "Jaz Karis is singing a love song, which is symbolic of my new love of Soweto and I'm honoured to have worked with Busiswa whom I have been a fan of for a long time."

Fittingly, the music video sees Juls traveling through the township, taking in its sights and energy. The video, directed by Nigel Stöckl, features striking shots of the popular area and its skilled pantsula dancers.

Here's a Playlist of Chill Songs to Relax to at Home