This Pre-Colonial African Warrior Queen is Your Next Favorite Superhero 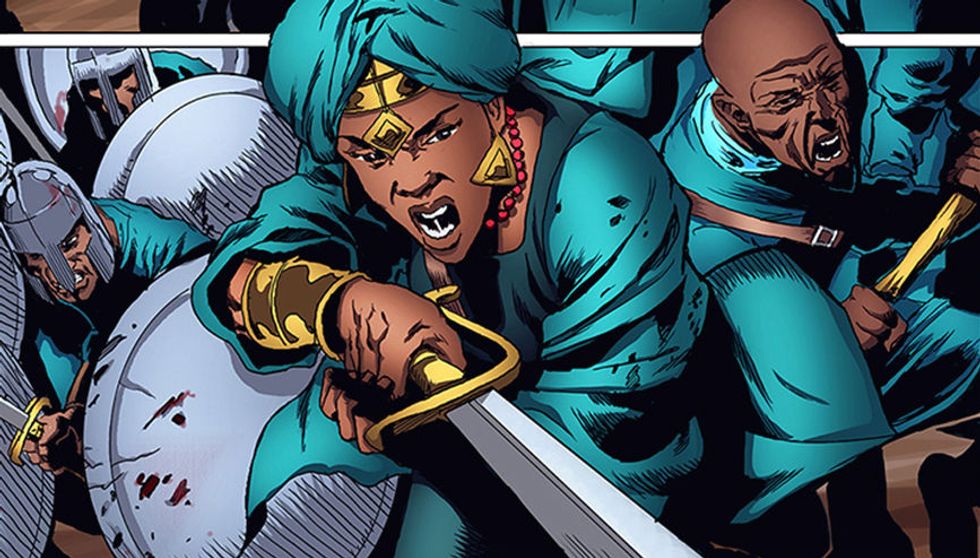 As Marvel’s cinematic universe continues to unfold–and bring in its first African character–an entirely new universe of African superheroes and supervillains is just jumping off.

Roye Okupe, the Nigerian-born, Maryland-based animator, writer and founder of YouNeek Studios, is on a mission to put Africa on the map when it comes to telling superhero stories. In doing so, he's set an entire universe of African heroes in motion.

"We have so many people with a wealth of creative and appealing stories on the continent, but they never really get the proper commercial exposure," Okupe told Okayafrica in a 2015 interview. "I believe if done properly–great script, good production values etcetera–Nigerians, Africans and people all over the world will be receptive."

After making his graphic novel debut with E.X.O.: The Legend of Wale Williams–a superhero story set in a futuristic Nigeria–Okupe has his sights set on pre-colonial Africa through the lens of one particularly kick-ass warrior queen.

The “YouNeek Youniverse” officially expanded this week with the introduction of Malika, a fifteenth century West African queen and military commander. The forthcoming two-part historical fantasy series will tell of Malika's exploits to keep the peace in her ever-expanding empire (in present-day Nigeria). "You basically get to see how an African queen lived her life back then," Okupe says of the book, which though fantasy, will draw largely from history.

I asked the graphic novelist to expand on his interest in pushing a female African protagonist. “When it comes to action, superhero or epic stories like this, a lot of people shy away from female leads. How many superhero movies were released before we got the Wonder Woman movie announcement?” he responded.

With the popularity of Jessica Jones on Netflix and Supergirl on TV, Okupe says people are finally starting to warm up to the idea, though he adds that female leads are still few and far between in comparison to male leads. “And let's not even talk about black [and] African female leads, which seem pretty non existent.”

The depiction of a strong and powerful queen, Okupe mentioned, is something everyone, especially young girls, should be seeing more of.

Malika's story will set the tone for all the other stories in his universe, of which the 20-something Nigerian superhero E.X.O. (aka Wale Williams) is the flagship character. Malika, meanwhile, will serve as a foundation upon which everything else will be built. “In a way, she is connected to everything,” he says.

Part one of Malika: Warrior Queen is a 150-page book due out in spring 2017. To coincide with the launch of a crowdfunding campaign for the series, Okupe has shared the book's first chapter, which you can view for free over here. For more, check out the Malika Kickstarter campaign.