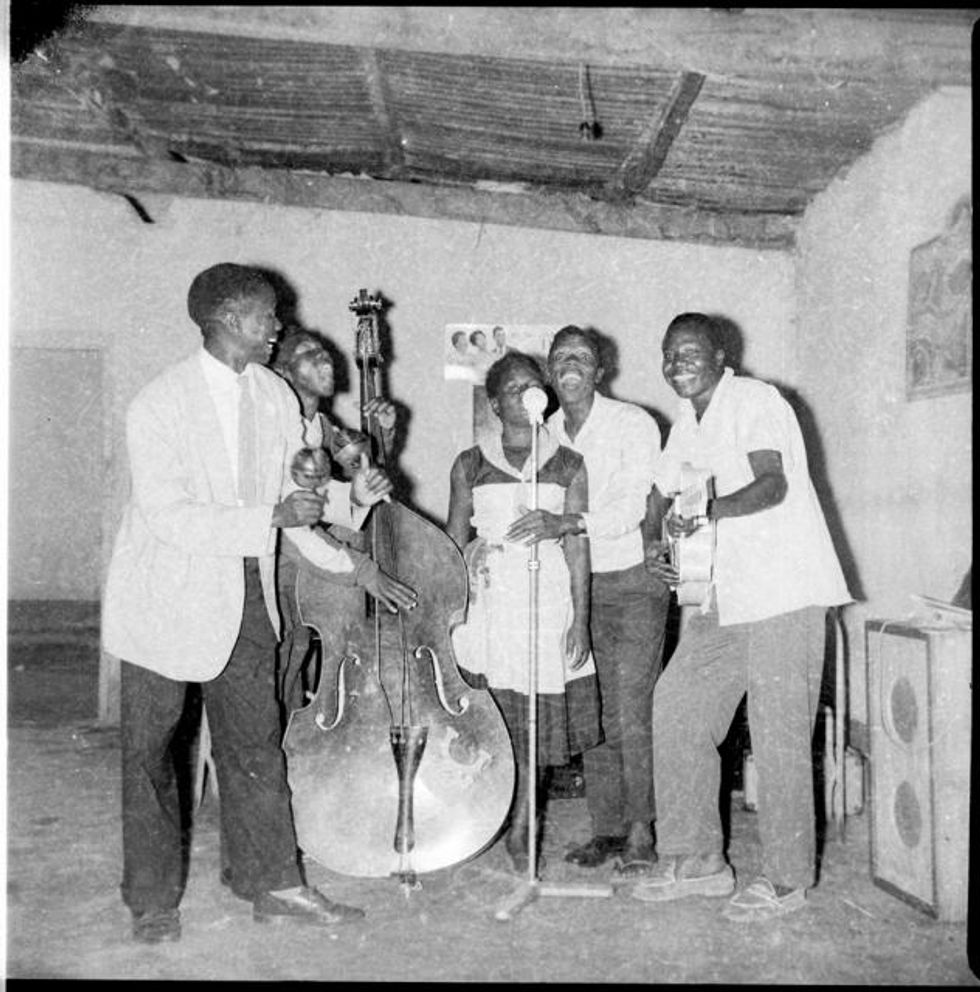 By the early 1960s, gramophones were relatively available: you could buy one in an Indian dukka in Kampala, Ugandan for example. Equator Records opened in Nairobi, Kenya and pressed and distributed records all over East Africa. Equator's signature 'African Twist' recordings created the region's first major commercial music. Played sparely on acoustic guitars, this localized version of the American Twist was primarily influenced by Congolese Rhumba brass bands, American doo-wop and rock and roll, and traditional singing styles.

The Twist is a popular American style of dance defined by the hips and legs moving left to right. Chubby Checker shouting into the microphone 'Come on Baby, do the twist!' is both its namesake and inspiration. As Rock n' Roll played on gramophones in Nairobi, musicians began to imitate the rocking doo-wop beat on their acoustic guitars. In 1960 the British-born Charles Worrod took note and launched Equator Sound Studios, which would become the hub of the African twist. Below we detail some of the most well known African twist recordings.

William's rock and roll groove is the first known recorded version of this Swahili folk tune. A love song by a suitor who, even though in love, cannot pay the bride price for the girl, "Malaika" has become a notably popular song to record, including a cover by Miriam Makeba.

This is the definitive sound of 1960s Equator Records. Though playful-sounding on this track, singer/guitarist Daudi Kabaka of the Equator Sound Band was known for his use of political lyrics.

The most iconic Ugandan musician of the twist era, Fred Masagazi's music was defined by both his traditional vocals as well as his unique rhumba-fusing style of guitar rock.

Kabaka's Swahili recording borrows heavily from traditional Kenyan singing. The track's rootsy feeling is reminiscent of the early 1960s music Miriam Makeba made with Harry Belafonte. The British beat group the Tremeloes recorded a cover of the track in English two years later.

In what could serve as the archetypal soundtrack to a 1960s romance film, this doo-wop-like call and response ode to love and marriage features Nairobi's Equator Sound Band backing the Ugandan duo.

Kabaka's anthem is known for having popularized Kenyan President Jomo Kenyatta's advocacy for rural development. Masses could be found dancing at political rallies to Kabaka's slightly faster take on the Twist.