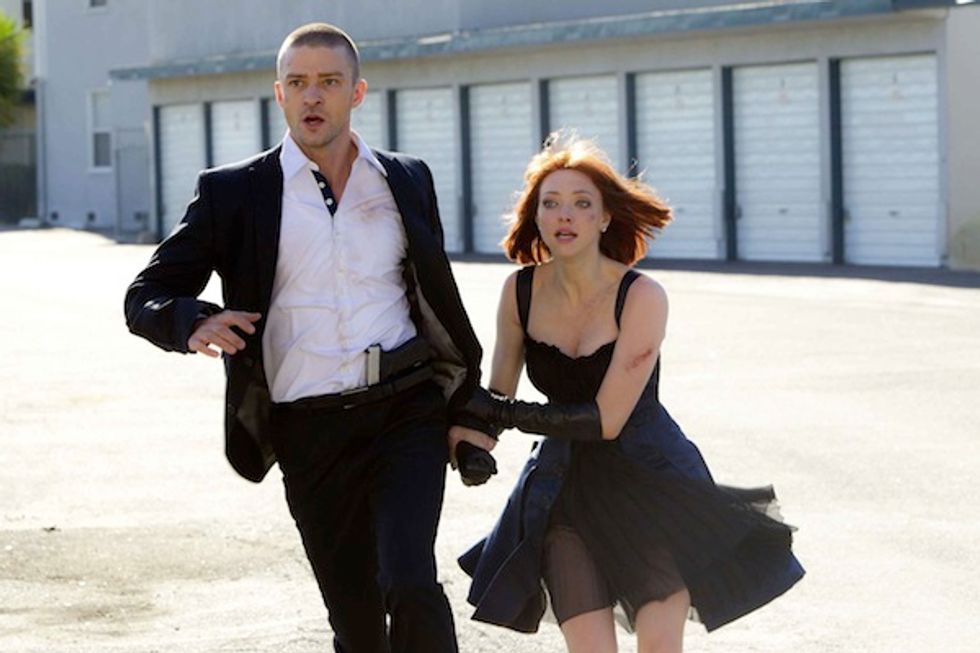 What do "Stealing Time" a documentary about African resources (specifically Zambia's mines) and Justin Timberlake's Hollywood thriller have in common?

Maybe you've seen the Justin Timberlake film In Time. Maybe you haven't (probably better for you as it's a pretty bad film). However as we came across the documentary Stealing Africa from the Why Povertyseries airing on BBC and PBS we couldn't help but see a connection between the two films. Directed by Christoffer Guldbrandsen and produced by Henrik Veileborg, Stealing Africa "investigates reports of widespread criminality by well-known multinational companies operating in Africa. Featuring interviews with heads of state, corporate insiders, and officials from the major global financial institutions, the nature and extent of the problem begins to emerge." You may be wondering what a crappy JT thriller could have in common with a documentary that explores economic development and capitalism in Zambia? Perhaps it's what I'll refer to as the "duh" of all things terrible and wrong with the world.

Watch Stealing Africa on PBS. See more from Why Poverty?.

For a quick synopsis, In Time basically tells the story of a future where people stop aging at 25, but are engineered to live only one more year. Currency becomes time, and the world is segregated into different time zones with the "rich" having decades to live, and the "poor" having barely minutes. In fact, when the film is in the poor time zones, we often see people "time out", and dead bodies scattered throughout the streets. Justin Timberlake plays someone from a poor time zone, who has been 25 for two years. A mysterious man from a richer time zone decides he's had enough and gives JT 100 years before he times out. He also lets him on the "big secret". Brace yourself for duh #1: The man tells JT: "You really don't know, do you? Everyone can't live forever. Where would we put them? Why do you think there are time zones? Why do you think taxes and prices go up the same day in the ghetto? The cost of living keeps rising to make sure people keep dying. How else could there be men with a million years while most live day to day? But the truth is... there's more than enough. No one has to die before their time." For some reason this comes as a huge shock to JT, who it seems has never considered the possibility that there was actually enough time (i.e. money, resources, etc) for everyone. This brings us to Stealing Africa.

The documentary is informative and investigates the age-old reality of how developing nations are flowing with natural resources, but retain little of the generated profit. The filmmakers don't give the impression that they're telling a story we haven't heard before, and sometimes the specifics can paint a more accurate picture and reveal a deeper injustice than has previously been conceptualized. So while there's a duh (#2): Western nations are stealing Africa's resources. It's a duh, that's somehow harder to digest. Honing in on Swiss company, Glencore, Guldbrandsen depicts the shady development of the company, and how through transfer pricing they manage to retain billions of dollars in profit without having to pay their fair tax in Zambia. The documentary is 55 minutes long, which makes it 25 minutes longer than "Kony 2012" the most-watched Youtube video about Africa — but seeing as this documentary doesn't rely on poverty porn and a sensationalization of 'misfortune in Africa' we figure the extra 25 minutes are worth it.

If In Time is trite because it relays a message that is seemingly obvious, like most thrillers it provides us with a portrait of our society, where the portrait is perhaps exaggerated in some ways but nonetheless a depiction of reality. What can we make of Stealing Africa, which documents a reality without the fiction? This leads me to conclude with duh #3: bad things happen every day, all day, everywhere. No matter how unjust these inequalities, regardless of how many people swore by seeing "Invisible Children" that we needed to save the Africans, most of us don't know how to extricate ourselves from these injustices. They might be simple, but they're deeply engrained and institutionalized across, through, and within borders. So, duh?

Check out Stealing Africa, streaming above, and at these links: US / UK / Canada /Netherlands