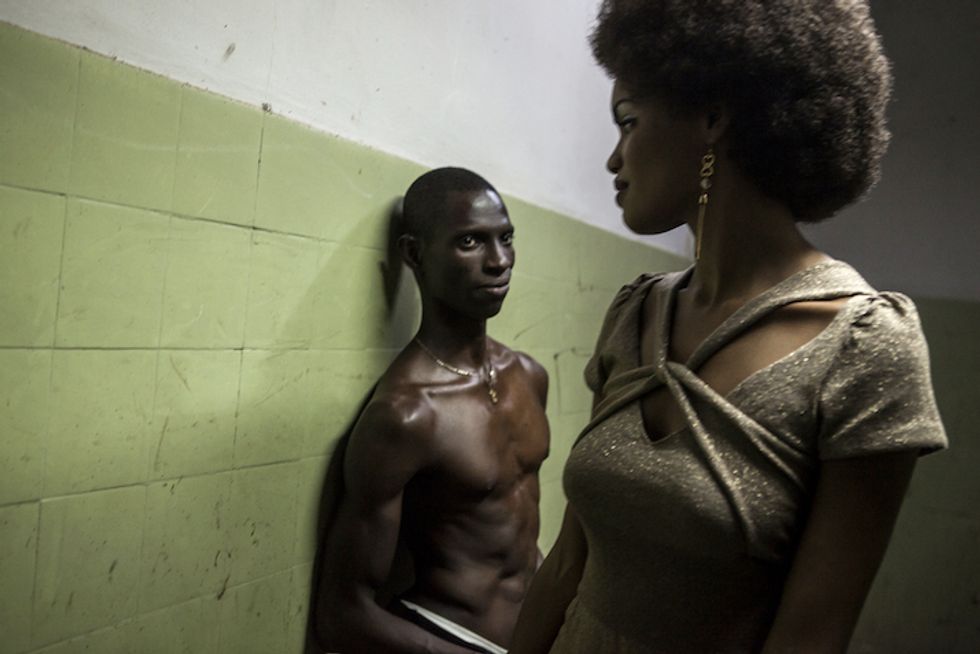 The 2013 Cannes Film Festival is almost upon us. Now in it's 66th year, the festival will run from 15 to 26 May, with Audrey Tatou hosting the opening and closing ceremonies and Steven Spielberg heading up the jury. Only a handful (or two) of African films have been selected for Cannes since its inception in 1946; and only twice have African directors taken big prizes. In 1975 Algerian director Mohammed Lakhdar-Hamina took the Palme d'Or for his Chronicle of the Years of Fire and in 1987 Malian Souleymane Cissé won the festival's Jury Prize with Yeelen (Light). The best decade for African film at Cannes to date was the '90s. In 1991 three films were selected for Un Certain Regard; a year later, Hyenas, Djibril Diop Mambéty's 1992 riff on (loathed GCSE text) Friedrich Dürrenmatt's The Visit, was in the main competition; and in 1999 Burkinabé director Idrissa Ouedraogo won the Grand Prix for Tilaï.

So far, this decade looks set to compete with that record (not that it's a particularly good record, but still). Last year one of our favourites, Moussa Touré's La Pirogue competed in Un Certain Regard alongside Nabil Ayouch's Horses of God and Ulrich Seidl who brilliantly took on the issue of white lady sex tourism in Kenya in Paradise Love. 2010 saw Rachid Bouchareb's and Mahamat Saleh Haroun's films screened as part of the Official Selection. In this year's predominantly Francophone selection, there just are two films by directors of African descent in the running for the festival's biggest prize.

Chadian filmmaker Mahamat Saleh Haroun won hearts, minds and a Grand Jury Prize with his quiet and wrenching Un Homme Qui Crie (A Screaming Man) in 2010. Like A Separation director, Asghar Farhadi, Haroun too returns to Cannes this year as an Official Selection, and there are high hopes for his  sixth feature Grigris. The French-Arabic-language film tells the story of 25 year old Grigris who wants to be a professional dancer. His paralyzed leg is no obstacle to his dreams, but his uncle falls ill, and in an effort to save him Grigris gets into petrol trafficking.  The title role is played by newcomer Souleymane Démé who stars alongside model Anaïs Monory and familiar-faces Cyril Gueï (Hitman) and Youssof Djaoro (A Screaming Man). Note that Grigris has both French and Chadian financial support; after years of neglect, General Idriss Déby and his government took notice of Haroun after his success at Cannes. Not only did the Chadian government partly finance his latest film, it's also building a film school, and the city’s long-derelict cinema is open for business. It's good news, but also a reminder of whose recognition counts when it comes to convincing governments to fund the arts.

Abdellatif Kechiche's La Vie d'Adele (Blue is the Warmest Colour) runs at just over 3 hours. It's  another long one from the director who a few years ago raised hackles with Black Venus (2010) a retelling of the life of Saartjie Baartman, the KhoiKhoi woman exhibited in 19th century Europe as an exotic 'Specimen' under the name "Hottentot Venus."  This the Tunisian director's fifth feature film, and by the sounds of the blurb we can expect his trademark focus on characters on society's edges and long, sonorous takes which magnify even small gestures. The film is adapted from a graphic novel in which Jocelyne (Adèle Exarchopoulos) is a 15 year old who dates boys until it turns out that she might like girls, particularly the blue-haired Emma, played by up and coming French actress Lea Seydoux.

Closing the festival is Zulu, the first English-language effort by French director Jérôme Salle. Apparently Salle's film is quite different in theme and tone from Michael Caine's 'classic' of the same name. Set in apartheid South Africa, Salle's film is adapted from a novel by award-winning crime-fiction writer Caryl Férey. Shot on location in South Africa, with UK, SA and French backing, the film stars Orlando Bloom and Forrest Whitaker (the Oscar-winner was deeply changed by his time in Uganda btw) as cops brought together across the racial divide to solve a series of crimes. Sounds a bit 'rainbow nation', but we'll have to wait and see.