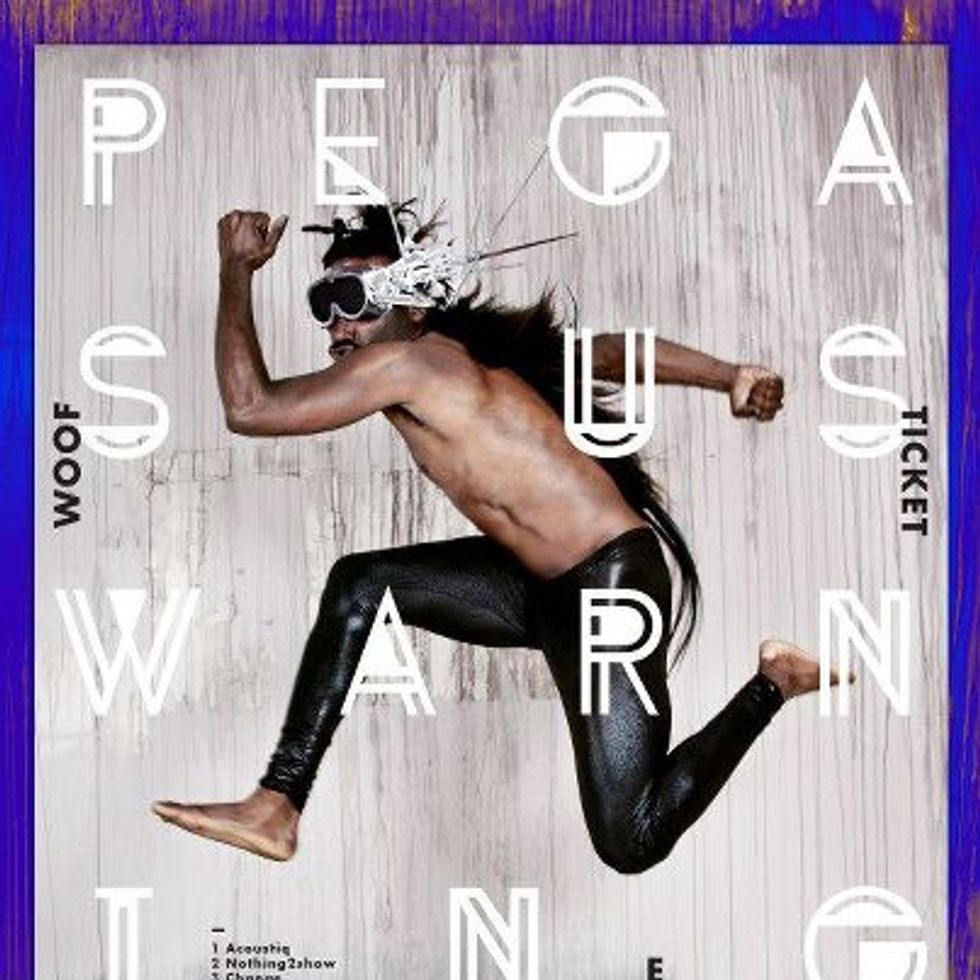 Fourpiece band Pegasus Warning, fronted by former NYU music professor Guillermo Brown, have been causing a stir with their electrifying live shows. Last week they caught our eye with their video for latest track "Try So Hard" which features naked bodies daubed in gold paint and writhing in lovelorn anguish. When we noticed the credits listed Kenyan-born visual artist Wangechi Mutu as artistic director, we got in touch to ask her about the concept behind the video and what relation it bore to her larger body of work. Pegasus Warning's EP Woof Ticket dropped earlier this week, and their first LP is due out in June. Check out the probably NSFW video and Wangechi's answers below.

The video for Pegasus Warning's track 'Try So Hard' is beautiful, and pretty sensual. Were the images a straightforward interpretation of the song, or was there a more layered concept?

Wangechi Mutu: Much of the mood and imagery for Pegasus Warning’s was first and foremost inspired by this gorgeous, heart-achingly, multilayered and thoughtful lyrics and of course the music of this song "Try So Hard." The images that came to mind were those of Rodin’s sculptures. Our set was built to reference cast bronze and two large pedestals were made for the actors. I wanted to harness the raw power and weight of Rodin’s erotic figures. There is an incredible amount of movement in his sculptures because of his expressive style and the intense gestures and straining musculature of his forms. I wanted to see what it would be like for those figures to actually move around the room.

Rodin’s piece "The Thinker" was an especially important reference. The work is quoted in the final shot of the video when Guillermo Brown (quite the cerebral brutha) and the main force behind Pegasus Warning and the lead actor in the video, sits with his chin resting on his hand. This frames the song as a meditation, a working-through, a fixation that builds emotion, momentum and complexity. The tension of the video climaxes with great energy. I wanted it to unfold slowly so that the viewer would be drawn in by the richly layered music and sensuous visuals. I wasn’t interested in making the kind of frenetic, flashy video that dominates our visual culture.

Can you walk us through some of your visual choices: the gold-flecked naked bodies, the hair, the heads that attempt to communicate despite being masked/gagged?

WM: The figures that are trying to speak through the metallic, liquid walls also refer to sculpture. The body is trapped straining to break through its material bonds. But, more importantly, the struggle speaks to the human condition. The voice of the song is striving – trying so hard – to make contact, to get close to someone. Yet, continually encountering barriers. I decided to use this ‘mask’ to show the frustration of not being able to connect to something outside of yourself, with an image of being trapped behind something as thin as skin.

The falling circles of light came out of improvising with materials on set. I happen to love surfaces and flecks of colored metallic materials. I think it’s just wonderful how the most essential minerals and ores connect our basic terrestrial selves to the stars and galaxies and therefore to our deep past and our future.

Much of your work centers on the body and dismantles or challenges the ideas that accrue to black bodies. How does this video speak to your other work, or do you see it as a side-project?

WM: The dancers in the video were painted from head to toe, every crevasse and crack is covered in a dark metallic body paint. They became the same color as the background, floor, pedestals and each other. It is still clear that the actors are black; this is highlighted in their hairstyles that have not been calcified. The sensual monochromatic scene suggests that we’re all carved from the same material.

The piece also subtly subverts the dominant Western art narrative by casting the sensual black body as a classical Rodin bronze sculpture. It highlights the fact that many of the figures in canonical sculpture are dark skinned, as they are cast in bronze. The video celebrates the beauty and richness of these tones.

You've worked with video in the past (we loved 'Mud Fountain' and your collaboration with Terence Nance last year). Do you have more video projects in the works: either more artistic director credits, or working more/differently with video in your own practice?

WM: Yes, I’ve been working on and I’ve created multiple videos as part of my own practice. Taking figures and letting them break pose, moving forms out of those fantastical ‘neverlands.' I sometimes will embody one of these characters in my own performance works, donning its costumes, creating its habitat, and adopting its persona. Most recently, I am turning some of my drawings into an animation. The piece features an extraordinary creature played by Santigold. It will premiere at my solo show at the Nasher Museum in Durham, North Carolina this March and will be shown with an integrated installation.