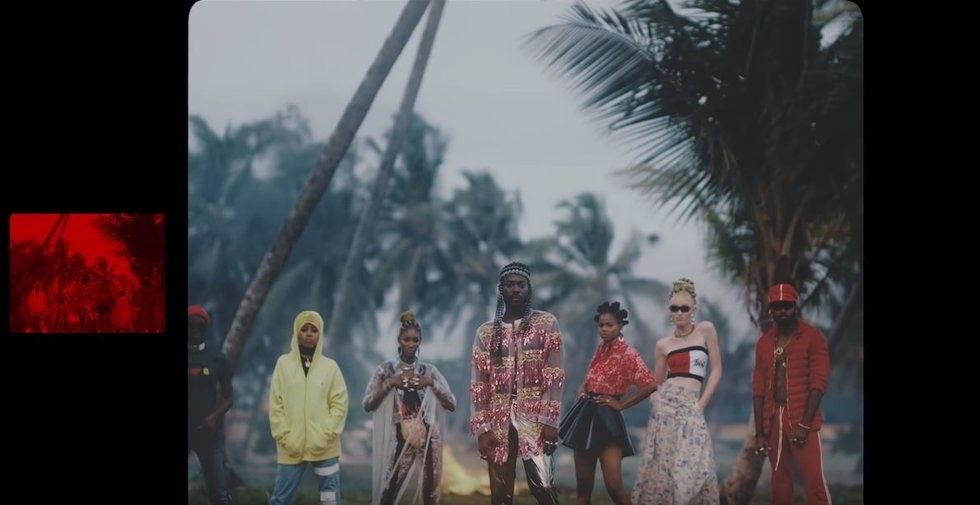 Adekunle Gold is back with the dope music video for his latest single "Kelegbe Megbe" (translates to "know your level"). This mellow high-life track is as spirited as it is absolutely beautiful. The sounds of "Kelegbe Megbe", which was produced by the talented Sess,are definitely influenced by the veteran Afrobeat legend, Fela Kuti. The scenes of the music video dart between shots of Adekunle Gold and his performers in both couture and quirky African fashion and accessories to backdrops of bold and colorful African wax-print fabrics. It's a stunning visual that feels like a high fashion photo-shoot in motion.

Ghanaian rappers ELand Joey B connect with Nigeria's Falzfor this addictive new collaboration and music video for "Ehua." "Ehua" is built on energetic afro-electronic beat work produced by EL himself. Joey B handles the hook while Falz kicks things off early with a solid verse. The eye-catching and hilarious music video for the single, directed by Yaw Skyface, features EL as a policeman, Falz as the 'oga' bossman, and Joey B as a worker for the Electricity Company of Ghana (ECG).

Michael Brun is pushing the new sounds of Haiti. Born in Port-au-Prince, the producer, DJ, and artist has been blending styles like konpa with electronic beat work. Brun is now releasing his 9-track debut album, Lokal, which features collaborations with contemporary Haitian artists and buzzing acts across the globe like Mr Eazi, Adekunle Gold,Eddy François, BélO, Major Lazer, Win Butler & Regine Chassagne from Arcade Fire, and many more.

Tshegueare a Parisian-based duo producing haywire rhythms influenced by West & Central African drum patterns and a downright punk approach. The duo, which is made up of Congolese singer Faty Sy Savanet and French-Cuban producer Nicolas 'Dakou' Dacunha, dropped their debut EP, Survivor, in 2017 and are now following it up the 4-song Telema. You need to check this out.

AYLØ is a rising rapper, singer & producer coming out of the same innovative Nigerian musical circles as the likes of Santi and Odunsi. AYLØ, who we previously named one of the 6 Artists From the New School to watch, is now back with his latest single "Paris!," a a hazy mix of hip-hop beatwork and woozy synthesizer waves anchored by the Nigerian artist's airy vocal delivery.

Tiwa Savage shares the colorful music video for her latest single "Ello Baby," featuring fellow Nigerian artist Kizz Daniel and producer Young John. The video sees the trio in a bubbly mood, preforming the love song amidst various outdoor settings and backdrops. One standout scene, features Tiwa on a chair suspended in the air, effortlessly matching the row of palm trees behind her in a green ensemble. The video is clean and simple, letting the song itself take center stage.

Moken 'Your Sun is Rising'

Moken is a Cameroonian singer who belts out songs in an unconventional and captivating baritone vocal delivery that makes it hard to not stop and pay attention. We premiered the new music video for the optimistic single "Your Sun Is Rising," which follows Moken as he dances in a park. It perfectly encapsulates his left-of-center approach to his art. "Your Sun is Rising is a message to everyone in the world who is lonely and waiting for love, to know that they are not lonely, that the sun that's rising every day in their lives is their lover who is rising with them to one day finally emerge in person," Moken tells OkayAfrica.

Blick Bassy is readying the release of his new album, 1958, a follow-up to 2015's Akö. The modern Cameroonian griot's new full-length follows Bassy as he delivers striking tributes to those who fought for Cameroon's independence, like anti-colonialist leader Ruben Um Nyobè, and the search for true identity, all sung in the Bassa language. We premiered the Cameroonian songwriter's beautiful and reflective new music video for "Woñi," which focuses on the continuing strains of neocolonialism and the need for escape through vices like alcohol.

Kwamz & Flava collaborate with heavyweight Ghanaian rapper Sarkodie to deliver some feel good-vibes right in time for summer. The track was produced by GB.

Afro B's massive single and arguably one of the song of 2018, "Joanna (Drogba)," continues to make waves well into 2019. Following the Wizkid remix, Afro B is now sharing another revisit to his hit alongside French Montana. The new remix keeps the original qualities and structure of the highly-addictive Team Salut-produced hit. French Montana pops in for a few added bars. We previously interviewed Team Salut about how they're making soe of the biggest Afrowave hits right now.

The unstoppable Davido teamed up with UK rapper Big Narstie and promoter-turned-artist Django23 for a laid-back music video. The visual, which is directed by the talented Twitch, has numerous scenes which mirror the equally mellow nature of "Control."