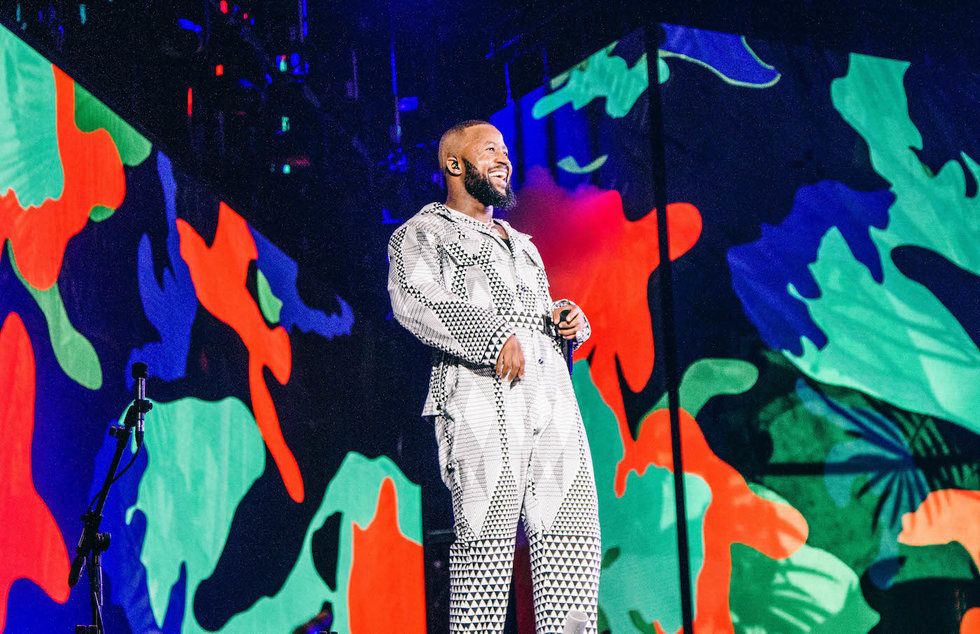 From Cassper Nyovest's upcoming album Sweet and Short, comes a new single titled "Sponono Sam." The song features legendary maskandi duo Shwi Nomntekhala. Nyovest and the duo croon passionately about their chosen ones over acoustic guitar and accordion squelches. "Sponono Sam" could become a pop sensation—we can see radio eating this one up.

Yemi Aladeis back with two catchy new songs that are sure to get dance floors packed. "Oga" and "Open, Close" are both produced by Edgar and continue a strong year in which the Nigerian star has dropped standout singles like "Heart Robber" and "Oh My Gosh"—and, of course, headlined OkayAfrica's "Mzansi Heat and Naija Beats" concert in New York City.

Read: 7 Reasons Why Yemi Alade Is a Music Video Icon

Burna Boy 'On The Low'

Burna Boycomes through with another feel-good song and music video. After dropping the sultry hit "Gbona" back in September, the "afro-fusion" star delivers once again with "On the Low," produced by Kel P. Burna slows things down on this one, singing about his affection for a special girl in his life. The love song is a different pace than we're used to hearing from the artist, but just as enjoyable nonetheless.

In April, one of South Africa's most potent lyricists, Reason, released the first single to his then-upcoming sixth album Azania. The Swizz Beatz-produced track of the same name was to set the tone for the album. In his sixth studio album, the South African lyricist does a lot of reflecting and the two themes that stand out are Reason's faith and sympathy.

Read: Reason Preaches the Gospel and Sides With the Downtrodden On 'Azania'

Blinky Bill dropped his long-awaited debut album, Everyone's Just Winging It And Other Fly Tales, last month and it's clearly been well received by fans in Kenya and all over the world. His latest music video for the hard-hitting single "Don't Worry" was filmed in Detroit and directed by his usual collaborators Osborne Macharia, Andrew Mageto and Kevo Abbra. Blinky prances around Detroit's Heidelberg Project—an outdoor art installation created to support the surrounding area's community—lighting up the vibe of this aggressive song.

Yanga Sobetwa became the champion of the 14th season of Idols SA. The 17-year-old singer from Delft, Cape Town was the youngest contestant of the season. The artist recently released a music video for her latest single "Scars (All Over Me)." In the song, the artist croons about a lover who left her distraught from heartbreak. The video, which was filmed by the company Call Back Dreams, shows the artist dressed in all black walking in slow motion among drum majorettes who are dancing in the background.

Wizkid and R2Beeshave previously connected on big songs like "Tonight" and "Slow Down." The Nigerian star and Ghanaian duo recently revisited their tried and tested musical chemistry in the new single, "Supa," which was produced by Killmatic. "Supa" builds on a minimal beat work and sparse-yet-addictive melodies to deliver a solid song about love and lust. The single now has a brand new music video, directed by Babs Direction, which follows the crew to the beach.

Falana couldn't let the year wrap up without making a statement. The Toronto-raised Nigerian singer recently dropped the music video "Ride or Die"—her first single in 4 years—directed by Daniel Obasi. The track highlights Falana's ability to stay in the pocket with afrobeat's elements of live instrumentation and catchy melodies, all the while making is clear that she's a loyal lover.

D'Banj and Cassper Nyovest 'Something for Something'

Tiwa Savage has had an eventful 2018, and to round it all out, the singer has dropped her latest single "One" for our listening pleasure. The track, sung mostly in Yoruba, is a spiritual ballad that sees the singer expressing gratitude for her success and flexing her honeyed vocals atop light, slowed-down production.

Afro B is coming off the heels of his banger "Shaku Shaku" to grace us with his last single of 2018 containing a message that should remain a constant reminder. The Ivorian-British hitmaker links up with producers Team Salut for "Melanin"—a 'pon pon' ode to black women and their beautiful skin. In the stripped-down single, you'll hear Afro B croon over his beautiful black woman and their love that can't be beat.

Te'Amir is a Los Angeles-based drummer and producer who tours and records with soul singer Aloe Blacc. In addition to that, he's played with many musicians from LA's unique hip-hop, soul and jazz scenes such as Kamasi Washington, Miguel Atwood-Ferguson and others. In his latest EP, Abyssinia Rise, Te'Amir continues to explore his Ethiopian heritage. He expertly blends electronic beats with traditional Ethiopian samples to create lively soundscapes that draw you in right away.