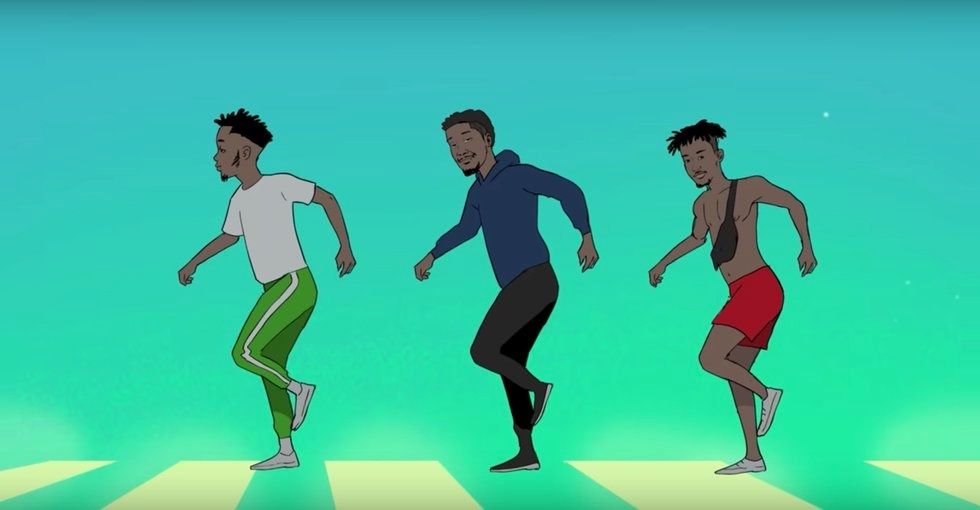 After the massive success of "Rapid Fire" featuring Shane Eagle and Amaarae last year, rising Nigerian artist Santi is back with yet another contagious single. "Sparky" is the seductive and whine-able track that you need to get your weekend started. The song was produced by his alté scene counterpart, Odunsi the Engine, with additional production from Le Mav. The track had been premiered on Apple Music's OVO Sound Radio in May last year and fans have been waiting eagerly for its release since then.

Rising South African duo Darkie Fiction recently teamed up with DJ Sliqe for a single titled "Standat." The song, just like most of Darkie Fiction's music, references old school kwaito, both sonically and lyrically. Katt Daddy, one half of the duo, spits a verse that comes with loosely packed lines, with some being repeated, while Yoza Mnyanda, the other half, handles the vocal duties. This one will make your day.

Harmonize dropped what was easily one of our favorite songs of 2018 with "Kwa Ngwaru." The Tanzanian stars now continues his hit-making trend with the release of the new 4-track Afro Bongo EP. The new EP showcases Harmonize's impressive blend of bongo flava with afropop elements and features a top-tier list of collaborators like Burna Boy, Diamond Platnumz, Yemi Alade, and Mr Eazi. It looks like it's gonna be another good year for the Wasafi Records family.

Mr Eaziconnects with Ghanaian DJ/producer GuiltyBeatz and rapper Kwesi Arthur for this infectious new single, "Pilolo." The track is named after the dance move that's been making the rounds, which was created by Incredible Zigi, as well as the Ghanaian children's game. "Pilolo" is released as part of Mr Eazi's emPawa initiative. It sees Eazi and Kwesi Arthur lending their vocals to a blend of afropop rhythms and electronic beats.

Nakhane 'You Will Not Die' (Deluxe Version) LP

UK-based South African artist Nakhane just released the deluxe version of his sophomore album You Will Not Die. The US release is preceded by a UK release that came out last year via BMG. The deluxe version of the 12-track album comes with six new songs, including the lead single "New Brighton" (featuring British artist ANOHNI) and a remix of the same song by internationally renowned producer and DJ, Maphorisa.

Kingsley Ibenechemakes deep, expansive tunes through the vehicle of soul music—bridging the gap between RnB and Afropop. On the singer-songwriter's second effort, Realms, the Philadelphia-based musician delves into experimental soul with a sound that summons his African roots. Realms boasts a level of sophistication and technical prowess that's presented with ease and grace, speaking to the artist's personal and professional modesty.

God Decides is a nod to Tellaman's journey, as well as the trajectory of his personal relationships. The new album serves as the Durban native's latest opportunity to exhibit a body of work after Lucid Dream and Mind vs Heart. The 27-year-old singer, producer and songwriter breaks down the album's concept via an e-mail to OkayAfrica: "God Decides is about Tellaman meeting a girl he loves while trying to make it as a musician, and trying to make both work. But at some point, she fails to understand that the industry gets the best of me. Being in a relationship and trying to make it as a musician is a very hard thing to pull off, and as a matter of fact I haven't figured it out yet."

Rina Mushonga 'In a Galaxy' LP

One can imagine that as pop music evolves, cultural borders will topple and genres might blend and blur the way rays of light shoot out from a prism. If so, Rina Mushonga and her new brilliant cosmopolitan pop album, In a Galaxy, are at the forefront of this radiant movement.There's hardly a song on this 12-track LP that doesn't weave the dynamic rhythms and jubilant melodies of Afropop into the mix. The electronic-folk experimentation of Francis Bebey also helps color these dynamic tunes, as well as the shimmering, jit music grooves of Zimbabwe ensemble Bhundu Boys.

London's Amahlaexpertly molds vintage soul influences into the gem that is her new Consider ThisEP. Her voice stands out like few we've heard recently while she tackles issues like immigration, female rights, Brexit and much more over these five songs. "Consider This is a record of individual stories," Amahla mentions, "A glimpse into all the things that have left an impact on me in the last year. And hopefully one way for us to remember what the hell was going on in 2019."

Murielle 'Can You Get Me High?'

Belgium-born, Congolese-rooted Murielle might be a new name on your radar, but it's one you should definitely keep an eye on. The 22-year-old singer/songwriter recently shared her latest single, "Can You Get Me High?," an alluring pop song that blends hazy vocal layers and synthesizers with influences from her Congolese roots. Check out the Tajayona-directed music video for the Luke Davis-produced single above.

In his 1997 classic track, "10 Crack Commandments," the late The Notorious B.I.G gave rules to navigating the crack dealing game. More than 20 years later, South African rap veteran L-Tido, in the song "10 Mac" from his third studio album, 2018's16, pays homage to the late rap legend. On "10 Mac," L-Tido gives rules to navigating the dating game for men. If you are having troubles with relationships or just don't want yours to be a cautionary tale, who better than L-Tido to guide you through it?

Canadian-Ghanaian artist AKUA tackles mortality in "Heaven," an entrancing new song off her upcoming debut album, Them Spirits, which aims to deal with grief and spiritual renewal stemming from the passing of her father. Let "Heaven" take you into a dream state above.

Dremo drops the new visual for "Nobody," taken from his first proper body of work, Codename EP. The video, directed by K, follows the DMW signee from his hometown of Ibadan to the streets of Lagos as he spits real lines about his come-up and the struggles he had to overcome as an upcoming artist.

Touchline won The People's Choice Award at the Verse of the Year Awards hosted by Slikour On Life and Stogie T last week. This is a result of the major buzz he has managed to create with aggressive punchline-heavy raps. From his 2018 EP/mixtape 18 Flow, comes the MC's latest video single "Award Shows." The song's video is tongue-in-cheek, showing the MC buying awards from a shop and later getting kicked off someone's lawn after shooting a scene of his video.

Nigeria's Illbliss and Teck Zilla recently dropped their joint IllyZilla EP, which features the standout boom-bap reminiscent track "Don." "'Don' is about respect for self and others, reputation, class and leadership," Illbliss mentions, "To keep hustling, surviving and winning against all odds. God made you king, so keep your head up…it's all divine." Meanwhile Teck Zilla adds, "No matter what field you're in, you always have to level up to get to the next plateau. Gotta walk the walk and also talk the talk. No half stepping. Lastly, adding Phlow on the hook just cemented the message, simple and plain."

Emtee just released the visuals for the song "Abantu," which features S'villa and Snyman. The song is from his 2018 EP DIY 2 and has proven itself a fan-favorite. In the song, which was produced by Kreazoe, Emtee and his collaborators, rap about people being jealous of other people's success, especially theirs.

Last year, Flex Rabanyan made a callout to his fans to contribute photos of themselves and their parents for his music video. Well, they clearly came through for the KZN-born rapper. The music video shows Flex rolling around in his hood as he recites his bars. The photos of different people with their parents intercut some of the shots, which include clips of Flex performing live. "Y.A.G.U" is the opening song for the young rapper's debut album The Born Free.