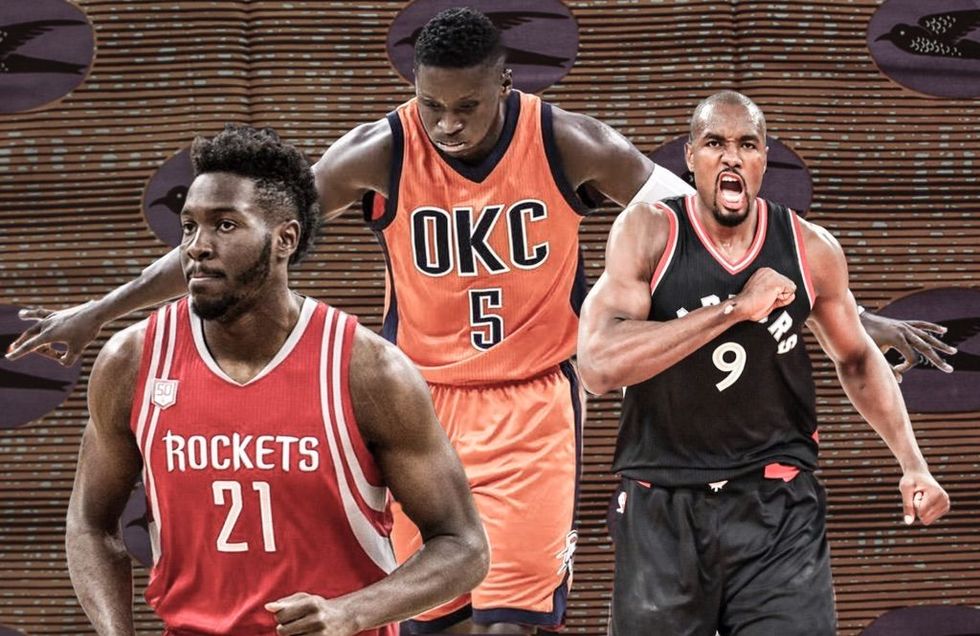 Here are 12 African NBA players to keep an eye out for in the post-season and next year.

The 2017 Playoffs has been action packed and players from the diaspora were well represented across the 16 teams to make it into this year’s NBA post-season.

Though Andre Iguadola is the only player on this list still in the fight for this year’s championship at the time of this article, check out our list to see who to be on the lookout for during the NBA Summer League in Las Vegas and next season.

Born and raised in Baltimore, Maryland, Daniel Ochefu currently plays less than an hour away from his hometown for the Washington Wizards in D.C. Ochefu studied at Villanova where he was a top player for the Wildcats for four years, leading his team to the NCAA Championship as captain in 2016.

Known not only for his skills on the court, but also his sportsmanship, Ochefu was awarded Villanova Wildcats’ 2015 and 2016 “Attitude” Awards. Though born in the states, Ochefu and his family moved back to in Lagos, Nigeria, his parents place of birth, for almost three years in 2006.

Ian Mahinmi is an NBA Veteran, entrepreneur, and philanthropist. Born to a Beninese father in Rouen, France, Mahinmi came to the states when he was drafted by the San Antonio Spurs in 2005. Since then, he has played for the Mavericks, Pacers, and most recently, the Washington Wizards.

Mahinmi started playing at 16 years old in France’s Pro A League, winning their under 20 Player of the Year award in 2006. He also played for the French National team for five years and in 2011, led them to the 2010 World Championship. Outside of professional basketball, Mahinmi helps run The French Deal, a men’s fashion collection he cofounded that blends fashion, hip-hop and sports. Further, he hosts a basketball camp in France during the summers.

Active both on and off the court, Thabo Sefolosha is not only a great defensive Center for the Atlanta Hawks, he also is a donor to several community initiatives in the States as well as in South Africa. A 10-year NBA veteran, Sefolosha fell in love with basketball while living in Vevey, Switzerland at 11 years old.

He played in Switzerland and France before being drafted by the Chicago Bulls in 2006. In addition to playing on the Bulls, he played on the Oklahoma City Thunder, with whom he went to the 2012 NBA Finals, and currently plays with the Atlanta Hawks who made it to the first round this year but were defeated by the Washington Wizards. Sefolosha also is an ambassador for IMBEWU, an After-School program in South Africa and hosts a yearly basketball camp in Switzerland.

Pascal Siakam grew up in love with soccer. It wasn’t until he was invited to a Basketball Without Borders camp in South Africa and was recruited by a prep school that he really started to take the game seriously. Originally from Douala, Cameroon, Siakim grew up with three older brothers who always played basketball. After attending seminary in Cameroon, Siakim took the offer of the prep-school God’s Academy in Lewisville, Texas to see what America and basketball would have to offer.

He excelled and went on to play for New Mexico State, from which he was drafted 27th by the Toronto Raptors in 2016. Off the court, Siakim is an ambassador for Right to Play International, an organization that empowers and educates youth, in Africa and beyond, through play. His father, who had a dream of one of his sons playing in the NBA, passed away after a car accident in 2014, and inspires Siakim to continue to excel. He wrote a heartfelt article in The Players Tribune about his journey.

In his seven seasons with the Oklahoma City Thunder, Serge Ibaka established himself as one of the best defensive players in the league, becoming only the 2nd player in NBA history, after Dikembe Mutombo, to record the most blocks in a season four years in a row.

Originally drafted 24th overall by the Seattle Supersonics, in addition to the Thunder, in the last year Ibaka played with the Orlando Magic and is now with the Toronto Raptors, who were swept by the Cleveland Cavaliers during the second round of the 2017 NBA playoffs. Originally from Brazzaville, Republic of Congo, Ibaka has 17 siblings and both his parents played for Congo’s national basketball team. He is an avid philanthropist, giving to UNICEF Get Boys and Girls in the Game project in his hometown, WildAid’s “No Hype” campaign and more.

After entering the league 15th in the 2013 NBA draft, Giannis Antetokounmpo went from being an unknown player selling watches and sunglasses to support his family in Greece, to becoming a phenomenon and fan favorite—later acquiring a $100 million contract from the Milwaukee Bucks.

Though they fell to the Toronto Raptors in the first round of this year’s playoffs, Milwaukee has been a happy home to Antetokounmpo, whose parents immigrated to Athens in 1991. Called ‘The Greek Freak’ by endearing fans, Antetokounmpo is known for his high flying dunks and ‘hand-is-faster-than-the-eye’ passes that have became viral on Vine and YouTube.

Andre Iguodala has been a major force in the Golden State Warriors’ outstanding seasons and Finals appearances in the last three years. The 33 year-old father of two was originally drafted by the Philadelphia 76ers in 2004. He then went on to play with the Denver Nuggets in 2012 before playing with the Warriors beginning in 2013.

Helping the Warriors to the postseason each year since he began, Igoudala made the First Team All-Defense in 2014 in addition to receiving the much coveted NBA Finals MVP honors after defeating the Cleveland Cavaliers in the 2014 Championship. Igoudola was also a 2012 Eastern Conference All-Star and MVP in the 2006 T-Mobile Rookie Challenge. An investor and speaker, Igoudala’s hometown of Springfield, Illinois awarded him the Key to the City.

Selected by the Golden State Warriors in the 2012 NBA draft, Festus Ezeli was with the franchise at some of their best moments, including winning the NBA championship in 2015. Ezeli is going into his second year of a two-year deal with the Portland Trailblazers, though hasn’t played yet because of his severe knee injury.

After talking with several doctors and other athletes, he went on to have a cadaver ligament replacement surgery, from which he's still recovering. The 6’11 center graduated from secondary school in Nigeria at the age of 14 and came to the United States in 2004. Ezeli went to Vanderbilt where he majored in Economics and became the basketball team’s all-time blocks leader. Ezeli is also a pianist and avid philanthropist, participating in and contributing to several community initiatives in his years in the NBA.

Not only is Al-Farouq Aminu from a long line of professional basketball players, he descends from a legacy of Nigerian kings. Entering the NBA in 2010 with the Clippers, Aminu, aka ‘El Jefe’ (Chief in Spanish), joined the New Orleans Pelicans and the Dallas Mavericks before joining the Portland Trail Blazers where he averaged 7.2 points per game this postseason.

Aminu also plays for the Nigerian National team, with whom he participated in the 2012 Summer Olympics in London. Aminu dominated in high school, winning back to back Georgia state championships and playing with the 2008 McDonald’s All-American Team as well as in the Jordan Brand Classic. Recently, he returned to his family’s hometown of Ibadan, Nigeria to host his ‘Aminu Basketball Camp,' the first of it’s kind hosted by an NBA player in the country.

21 year-old Noah Vonleh never let his age determine his work ethic on any team he’s played for throughout his basketball career. At Indiana University, he was a standout player that became a lottery pick in the NBA draft after his Freshman year. The Charlotte Hornets had just come off a playoff year when they picked up Vonleh and he proved his worth.

In 2016, he was chosen by the Portland Trail Blazers where he was said to be a key factor in their arriving in the NBA post-season and where he plans to stay and grow his dynamic game. Originally from Nimba County, Liberia, Vonleh was recruited to attend prep school in Haverhill, Massachusetts, then played in New Hampshire and in the McDonald’s All American game before his time at Indiana.

Coming off his rookie year in the NBA, Chinanu Onuaku made his mark in the D-League and his current team, the Houston Rockets. A standout to many fans because of his unique, underhand “Granny Style” free-throws, the 6’ 10” former University of Louisville powerhouse was able to play with Rockets through the second round of this year’s NBA Playoffs, where they were fell to the San Antonio Spurs.

In 2015, Onuaku played with Team USA at the Under-19 FIBA World Championships and helped them bring home the gold medal. It was at the championships where his defensive power caught the eyes of NBA scouts. After his sophomore year at Louisville, Onuaku entered the NBA draft and came out as the 37th pick in the second round.

Hailing from Upper Marlboro, Maryland, Victor Oladipo is looking to make the Oklahoma City Thunder a team to watch in the NBA postseason next year. Though they loss to the Houston Rockets in the first round of the NBA Playoffs this year, he will be back next year to make a greater push toward the coveted championship title. The now 25-year-old guard was a standout at Indiana University before being drafted by the Orlando Magic, where he played for three seasons.

As a rookie he also became only the second in Magic history with 1,000 plus points, 300 plus assists and 100 plus steals in a season after Anfernee ‘Penny’ Hardaway. At IU, Oladipo ranked third in their history in career steals (161) and was named the Sporting News National Player of the Year, plus the Big Ten Defensive Player of the Year. Oladipo has three sisters including his twin Victoria. He also is a great community advocate and pillar, winning the 2015-2016 Rich and Helen Devos Community Enrichment Award.