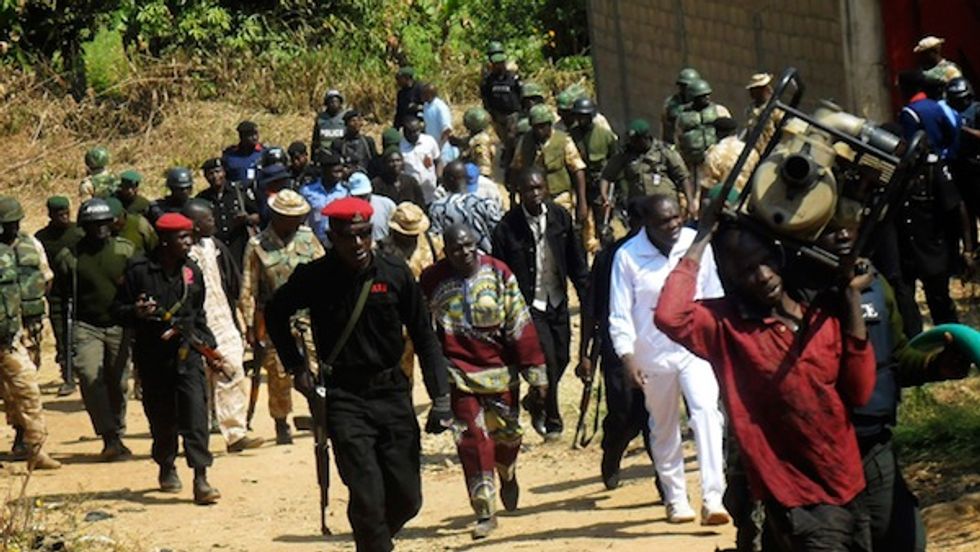 1. Nigeria Has A Rape Culture Too

For Nigerians Talk (Guardian Africa Network), Amaka Okafor-Vanni uses the recent gang rape atrocities in India, to draw out Nigeria's embedded patriarchy and engagement with rape. Okafor Vanni states, "The first time I read the story, I quickly shrugged it off to shield my consciousness from imagining what the victim went through. Yet, the savagery of the act, the use of a rusty metal rod to brutalise her insides, still haunts me. A lot has been written about this incident and anything worth saying has been said. However, I'm writing this in the Nigerian context and violation for the female body in mind. What would have happened if this incident happened in, say, Lagos or Abuja? Let me tell you what would happen. Nothing." Check out the article for a compelling proclamation that doesn't sheer away from problematising Nigeria's patriarchal understanding of women's bodies and sexual violence.

In Al Jazeera Hamid Dabashi asks a loaded and complex question: "Can non-Europeans think." Citing an earlier Al Jazeera article, which reflected the great thinkers of our time, all of who are embedded in Eurocentric philosophies and discourses-Dabahi suggests that those thinkers, even from the west such as W.E.B. DuBois who have engaged in both Western and non-Western discourses become boxed into the category of ethnophilosophy. "The question is rather the manner in which non-European thinking can reach self-consciousness and evident universality, not at the cost of whatever European philosophers may think of themselves for the world at large, but for the purpose of offering alternative (complementary or contradictory) visions of reality more rooted in the lived experiences of people in Africa, in Asia, in Latin America - counties and climes once under the spell of the thing that calls itself "the West" but happily no more." The article can get academic-y at times, but poses interesting questions as to how non-Western thinkers such as Cheik Anta Diop have attempted to create and engage with other ways of knowing.

For African Arguments Richard Dowen provides some context as to how the Mali conflict began considering that "until recently Mali was famous only for its music and for Timbuktu — our nickname for nowhere. Just a couple of years ago Mali was held up by Western aid donors as a success. It had been relatively democratic since the Malians overthrew a dictatorship in 1992. And despite being poor — its main earners are gold and cotton — it functioned better than many of its neighbours. But last March there was a coup and now its Government is ineffective. What went wrong?" In the article Dowen highlights how the Tuareg quest for secession, the Sahara desert and the destabilisation of southeastern Nigeria have all contributed to where Mali stands today.

4. How Washington Helped Foster the Islamist Uprising in Mali

For another interesting Mali read, check out this article from the New Internationalist where Jeremy Keenan outlines exactly how involved the United States has been in Mali politics over the past decade. "Azawad’s current nightmare is generally explained as the unintended outcome of the overthrow of Libya’s Muammar al-Qadafi. That is true in so far as his downfall precipitated the return to the Sahel (Niger and Mali) of thousands of angry, disillusioned and well-armed Tuareg fighters who had gone to seek their metaphorical fortunes by serving the Qadafi regime. But this was merely the last straw in a decade of increasing exploitation, repression and marginalization that has underpinned an ongoing cycle of Tuareg protest, unrest and rebellion. In that respect, Libya was the catalyst for the Azawad rebellion, not its underlying cause. Rather, the catastrophe now being played out in Mali is the inevitable outcome of the way in which the Global War On Terror has been inserted into the Sahara-Sahel by the US, in concert with Algerian intelligence operatives, since 2002."

Last but not least, for some context on Kenya's upcoming election check out this article from African Arguments. Ben Rawlence expresses apprehension at Kenya's difficulty with getting the electorate registered and ready to vote, "Turnout in recent elections in Nigeria has gradually shrunk to shocking levels; in many places in 2007 nobody voted at all and in 2011, the result was a foregone conclusion. This time in Kenya, through a mixture of active disruption (in Coast and Dadaab), bureaucratic incompetence, and fear, the Independent Electoral and Boundaries Commission (IBEC) has only registered around 65 percent of the electorate, undermining the poll’s credibility."

Check back next Thursday!