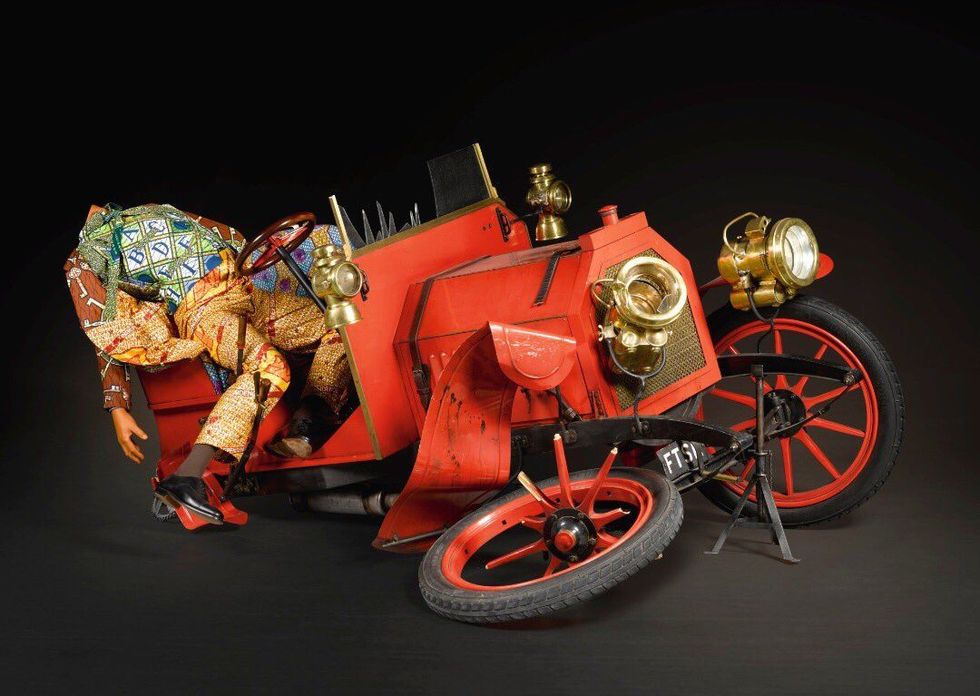 The next highest bid was for Yinka Shonibare's Crash Willy at $290,000.

NIGERIA—A single Chibok girl was able to escape Boko Haram and return home on Wednesday (May 17), says presidential advisor Femi Adesina to the BBC. She was reportedly found by Nigerian troops.

Eighty-two girls returned home earlier this month after a negation was brokered by the International Rescue Committee.

SOUTH AFRICA—A social media campaign in South Africa is urging men to get involved in a protest to help address gender-based violence in the country. #NotInMyName is the hashtag being used to gather South African men for a demonstration at the Union Buildings in Pretoria on Saturday (May 20).

The call to action comes in response to the pervasive killings of South African women, often at the hand of their partners. Last month, 22-year-old, Karabo Mokoena, was killed and set on fire by her boyfriend. The incident ignited a conversation about gender-based violence around the hashtag #MenAreTrash.

Ok enough with the "Not all men are trash" chats. Here's an initiative 2 raise awareness. Come support the #NotInMyName march on Saturday!! pic.twitter.com/rJtJpAWIVv

NIGERIA—Protestors have taken to the streets of Abuja to urge the government to act on behalf on Nigerians currently imprisoned in China.

According to a letter from organizers at the Black African Reorientation and Development Organization, "over 6,000 Nigerians are currently in various Chinese prisons. The facts show that over 55% are unlawfully and illegally being incarcerated."

Read more on this via BBC Africa.

UGANDA—A Ugandan entrepreneur, wants to take the Ugandan sport of kwepena to the Olympics. The sport which translates to "dancing" is widely played by Ugandan youth and involves a soft ball being thrown at opponents similar to the way dodge ball is played. If

The man behind the mission, Simon Tumukunde, has worked to formalize the game by creating official rules and guidelines.

“We looked at kwepena as a traditional game that was played years and years back by our grandparents – and, maybe, by the little girls right now – and we realized that it’s a game that is also overlooked," he told Urban Television.

Read more about this story here.