The Best Moments In African Sci-Fi 2015 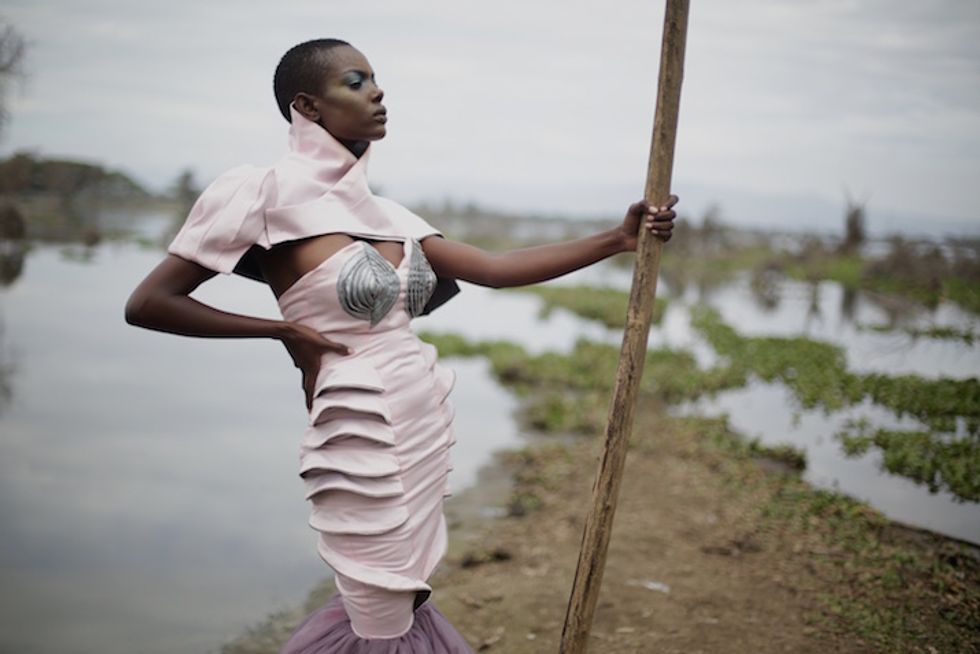 Okayafrica looks back at the best moments from 2015 in African sci-fi.

The NEST Collective's To Catch A Dream, Dir. Jim Chuchu.

The year 2015 saw Africans on the continent and in the diaspora continue to imagine what the future might look like in the worlds of art, literature, music, film and beyond.

This is the year we saw post-apocalyptic Ethiopia and Kenya brought to life on screen.

In May, the New School’s first-ever Afrofuturism conference brought three days worth of “new African narratives” to Manhattan. In October, the Goethe-Institut's debut African Futures festival was held simultaneously across Johannesburg, Lagos and Nairobi. And in November, Sao Paolo’s first Afrofuturismo film festival brought 21 feature-length and short movies from the black diaspora to Brazil.

Over the weekend, 23-year-old British-Nigerian John Boyega skyrocketed to super-fame as the lead of the new Star Wars franchise. Lupita Nyong’o also lent her voice to the far, far away galaxy. British-Nigerian star Chiwetel Ejiofor meanwhile added two sci-fi flicks to his name this year with roles in The Martian and Z for Zachariah.

Below, we look back on some highlights from 2015 in African sci-fi.

Crumbs–which we highlighted last week in our Top 15 Films of 2015–drops viewers headfirst into a striking post-apocalyptic Ethiopia. Ethiopian actor and actress Daniel Tadesse and Selam Tesfaye star in this 68-minute “romantic, surrealist science-fiction epic” that follows the scrap collector Gagano on a quest for he and his lover to return to their home planet.

Of course, Crumbs wasn’t the only project to envision a post-apocalyptic East Africa this year. Kenyan filmmaker and director Dan Muchina, working under the pseudonym Abstract Omega, imagines a dystopian Nairobi run by a dictatorial government in the two-part Monsoons Over The Moon. The short film tells the story of a street gang known as The Monsoons, who, having previously escaped the oppressive system, resurface to help liberate young people from the system. The narrative follows a young woman, Shiro (Anita Kavuu-Ng'ang'a), whose violent boyfriend has disappeared, and his rivals are using her to look for him. Shot in black-and-white, the film touches on the contemporary Kenyan political themes of surveillance, mass incarceration, and the effects of capitalism.

With Finding Fanon, Larry Achiampong and David Blandy explore the post-colonial condition from inside the simulated environment of Grand Theft Auto 5. The short-film trilogy combines art-house cinema with Machinima as the two UK-based artists go on a quest to uncover Frantz Fanon‘s three lost plays. In the process, the characters negotiate the Martinican philosopher’s ideas and set out to examine how the politics of race, racism and decolonization impact our relationships in an age of new technology, pop culture and globalization.

Gato Preto is the “afrofuturistic bass” project comprised of rapper Gata Misteriosa (Mozambique/Portugal) and Lee Bass (Ghana/Germany). In their video for “Garulho,” the duo travels through time into a post-apocalyptic universe in which the evil ruler General Distortion has ceased power. The video’s plot is further detailed in a press release from the group:

“Years have passed since the evil Ruler of all Galaxies General Distortion imprisoned Gata Misteriosa and Lee Bass.

Once he killed Gudugudu, the only person left who knows the art of drumming, he alone possesses the very last Secrets of the holy Beats and can finally control the Groove of the whole Universe.

Gata and Lee will have to help General Distortion in order to get their freedom back, but will they really help the evil ruler with the destruction of the last remaining ancient grooves?”

Pandora is an experimental 360-degree short film made in Ghana by the Accra-based virtual reality production company NubianVR. The four-minute clip follows the title character (played by Doris Mamley Djangmah) as she journeys through a dreamscape of a virtual Accra, where the ancient Greek myth of Pandora is “re-imagined in an African context and retold through the looking glass of virtual reality.” Jonathan Dotse and Kabiru Seidu direct and produce.

Nigerian-born writer and digital animator Roye Okupe’s 136-page graphic novel trilogy follows the journey of a young Nigerian superhero in the year 2025 in E.X.O.: The Legend of Wale Williams.

As the story goes, Wale Williams inherits a nanosuit that grants him superhuman abilities after his inventor father mysteriously goes missing. Tricked into returning home to the fictionalized Lagoon City (modeled after Lagos Island) following a five year absence, Williams sets out to investigate his father’s disappearance. In the process of understanding his suit’s powers, he realizes he must restore hope to Lagoon City by preventing attacks from the leader of an extremist group known as The CREED.

In addition to launching part 1 in the graphic novel series this year, Okupe and his Maryland-based YouNeek Studios released a series of test pilot clips for an animated TV version of E.X.O.

To Catch A Dream is a surreal Kenyan fashion film from Nairobi-based arts collective The Nest in collaboration with their in-house fashion initiative Chico Leco. The 13-minute short stars Kenyan model Ajuma Nasenyama as a grieving widow plagued by recurring nightmares. In an effort to rid herself of the nightly terror, she explores a forgotten fairytale remedy that causes her to transcend the physical realm to face the ghosts of her past in the afterlife.

In the stunning music video for “Capture,” Congolese-born Belgian rapper Baloji goes on a road trip through Kinshasa with the afrofuturistic performance art collective Kongo Astronauts. The end result is a breathtaking, futuristic ride through the artist’s birthplace.

South African filmmaker Lebogang Rasethaba brings the world of “Future Mfana” to life in the music video for the Okmalumkoolkat and Sibot collaboration “Nice Shandees.” “We used the idea of a ‘future mfana’ as the kind of bottom line of the idea, and explored different themes around the cosmos, orbit paths, Zulu ancestry,” Rasethaba says of the video. “We wanted to marry things that have never been seen together before, especially within the music video language, we just wanted to make something that stood out.”

2016 is already looking to the future and to fantasy as well.

Nigerian-American brothers Onyi and Obi Udeogranya are working to advance the market of “African Magical Futurism” with their ‘AfroAnime’ series Red Origins.

The fictional African nation of Wakanda will re-emerge from the pen of Ta-Nehisi Coates, who was recently tapped to write Marvel’s upcoming Black Panther series.

And here at Okayafrica, we promise to bring you even more of the latest news and trends in African sci-fi.