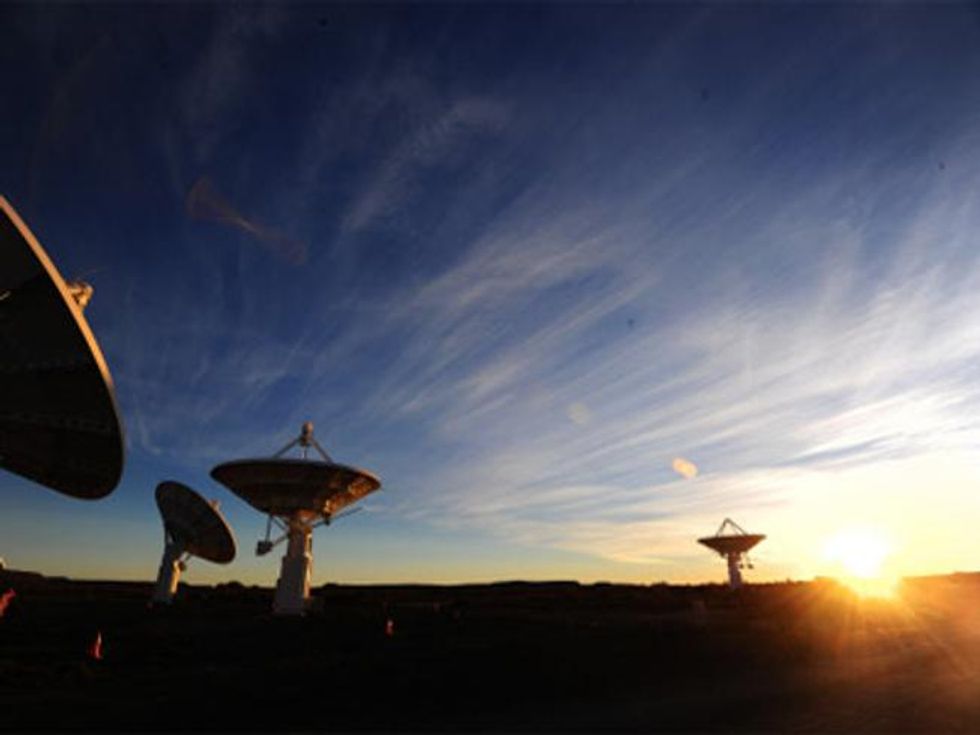 A decade ago, the idea of African space programs might have been met with disbelief, but today programs across the continent are focused on outer space.

*Students at Ghana's All Nations University prepare a test launch of a small satellite as a part of the school's new Ghana Space Science and Technology Center.

What a Difference a Decade Makes

A decade ago, the idea of an African space program or African space agency might be met with disbelief, even laughter. A continent characterized by famine and tinhorn dictators and ethnic slaughter certainly could not send a rocket into space.

That same attitude toward Africa tends to dominate even today. But the reality of Africa is diverging significantly from the old tropes. Today, eight African countries have space agencies, space centers or mission control facilities. Several others, including Uganda and Ghana, are in the process of launching theirs. Megascience projects are sprouting up from the Cape of Good Hope to the Gold Coast.

As Paul Quirke notes in Consultancy Africa, there has even been extensive discussions regarding the creation of a cross-national African Space Agency, one which “will liberate Africa from the technological domination of the West,” according to Sudan’s president, Omar al-Bashiri.

What explains this shift? According to African scientists, the increase of the speed and affordability of computing power, advances in manufacturing, youth, focus on the achievable and a grim determination on the part of African governments to invest in a scientific future have turned the continent and aimed it straight at the future.

Currently the continent’s largest economy, South Africa has increased its spending on space sciences to €127.4 million, according to Professor Nithaya Chetty, group executive for South Africa’s National Research Foundation.  In Africa as a whole, he estimates current spending at € 153.8 million. Africa writer G.P. Zacharay estimates South Africa spends 64% of all space research funds in the continent.

“What is certain is that there is significantly more expenditure on space science and technology in Africa than there was 10 years ago,” said Dr. Peter Martinez, Chairman of the South African Council for Space Affairs and head of the Space Science and Technology Division of the South Africa Astronomical Observatory.  “What has changed is that there is a greater appreciation among Africa's political leadership of the important role of space science and technology as a motor of socioeconomic development.

Knowing where to focus that money can make the difference between becoming a world player and staying in the scientific shadows. Southern Africa in particular is well positioned for astronomy and that has become its focus, both in optical and especially radio astronomy.

“Southern Africa has a geographic advantage in astronomy because of direct sight into the Milky Way,” Chetty said. “but also because we have huge tracks of virgin territory with radio quiet zones and optically clear skies.” This, according to Martinez “attracted considerable investments from countries of the North in astronomy facilities in Africa, particularly southern Africa, which now hosts some of the premier ground-based astronomy facilities in the world, making it an attractive destination for scientists to work.”

It’s this focus that has made the Square Kilometer Array (SKA) particularly suitable for South Africa.

When the 1.5 billion Euro SKA is finished, it will be the single largest scientific structure in the world, dwarfing CERN’s Large Hadron Collider. When construction is completely finished and the structure is operational, it will create a radio telescope array made of 3,000 individual radio telescopes in South Africa and Australia, covering a total of five square kilometers.

The advent of high speed computing and networking and fibre optical cable knitting together the continent has also made space science projects, large and small, practical in a way they were not before. The continent is surrounded by undersea high speed cabling that has tied it firmly into the world’s information economy.

And the SKA is simply the largest and most dramatic example of African astronomy facilities and programs. An African very-long-baseline inferometry (VLBI) satellite network is currently being built across the country; the High Energy Stereoscopic System (H.E.S.S.) gamma ray telescope is operational in Namibia (below); the largest radio telescope in the world, the MeerKAT, is under construction in South Africa and the fifth largest optical telescope in the world, the South African Large Telescope (SALT) is located in the Northern Cape Province.

*The HESS Telescope in Namibia.

“African governments,” Chetty believes, “are finally coming around to understand the critical importance of science as an instrument for development. Training in astronomy, and training in computing and engineering leads to skills that are very wide ranging and are transferable to other disciplines and even in endeavors far removed from academia; for example in commerce and industry. This will become the basis for training a new generation of technicians and artisans.”

“Effective space partnering has taken a strong hold in Africa, especially in Ghana,” he told us. “Although Ghana has not long experience in space-related events and does not have a major presence on the global space stage, its socio-economic advancement and sustainability depends largely on the use of space technologies, applications and services.”

Ghana’s government has established the Ghana Space Science and Technology Centre (GSSTC) which is both a center of development and teaching but also seeks to overtly leverage “commercial application of space science research for the economic transformation of Ghana.”

Over 50% of Africa’s population is under 30 years of age. The enthusiasms of that group in Ghana have powered a deep concern for space and what knowledge of space means to those on Earth. To educate and practically guide those whose enthusiasm for space is fueling the current interest could be the make-or-break in whether that interest has a developmental potential for the country and the West African region.

Justin Jonas, director of SKA South Africa said his project is a tool to develop the talents and knowledge of African scientists in a public sphere and is deeply interwoven with a “human capital development program.”

“SKA’s going to be the biggest thing around,” Jonas said. “One of the first thing we set up was over 400 grants in five or six years.” The grants have allowed, and will continue to allow, graduate students to get hands-on experience designing, building, maintaining and utilizing the SKA. A quarter of students South Africa has hosted on the project so far have been from within Africa but from outside South Africa itself.

“Over time, a good proportion of those students will power the economies of South Africa and other countries” in Africa, he said. They will start their own companies, run others and govern their countries’ policies, because they will have demonstrable proof of excellence and experience at the very top level of practical science and engineering.

“The bottom line is, African governments are finally beginning to listen to the scientists,” said Chetty. So is business.

But when are we going to see an African astronaut fly to the moon in an African rocket ship? This is a question we asked practically everyone we talked to because, well, some of us watched men walk on the moon on grainy televisions in primary school classrooms.

For one thing, there have been Africans in space, technically. Three of them so far. However, the two who were astronauts—Phillippe Perrin born in Morocco and Patrick Baudry, born in Cameroon—were born to parents from outside Africa, joined the French Air Force and do not live in Africa;  and the other, South African Mark Shuttlesworth, was a space tourist.

But Africans aboard an African space vehicle leaving Earth? For Africa, Chetty explained, astronomy, not manned exploration, is the key to space.

“Space programs in Africa are not focused on getting men in space," he said. “Telescopes-on-the ground is very achievable and we can produce world class science from them. In terms of development, astronomy catches the imagination of everyone, children to old folks; it brings cultures together. Is there a culture on the planet that has not looked up into the sky and wondered? astronomy has become a sort of brain gain, and a way to develop a number of peripheral activities which other sciences don’t  have the ability to do.”

In the past, Southern Africa has been a place for Europeans to come to look at the sky, make their observations and hie it on back to their home countries and their own universities, in essence, taking their science with them, a practice Chetty calls “extractive science,” is being supplanted by a more independent and then cooperative model.

“There has been little endemic development of the science,” in Africa until now. “Now, we’re paying a lot of attention to producing an environment where science will develop, building up our universities. For me, that’s the dream: international scientists come to collaborate because we’re doing world class science. Extractive science, neo-colonial science, that’s not going to happen on our watch.”

Chris Nsamba, the founder of the private Africa Space Research Program (ASRP) in Uganda, however, disagrees.

“Yeah! Definitely“ there will in time be an African astronaut reaching space in an African rocket.

The ASRP plans to launch a satellite from a Ugandan-built rocket next year. He said a successful test of the booster rocket was completed in 2011. His $45 million project is primarily funded by wealthy donors, though Nsamba said the Ugandan government has pledged some funds. Its facilities are on land owned and provided to the project by one of the funders.

Theirs will not be the first Africa-launched, African-built satellite. South Africa and Nigeria have both launched their own, with the latter making clear their intent to put a man in space by 2015. Other countries have also launched satellites purchased from others and still more have had other countries launch satellites from and for them.

What makes the program unique is its bootstrapping, a kind of do-it-yourself approach known in Kiswahili as “jua kali.” But do not mistake do-it-yourself for amateurish.

Perhaps it’s fitting that Uganda is so ambitious. After all, NASA’s first African-American flight director is Kwatsi Alibaruho, a Ugandan national.

The tug between entrepreneurs and governments can get very enthusiastic in Africa. Often whether you are government-funded may depend as much on your political connection to those in power as on the scientific, or economic merit, of your project. Some may consider the ASRP project to be putting the cart before the horse. Unlike the programming of a mobile money application, satellite launches are extremely resource and infrastructure-intensive.

But Nsamba and his crew are independent-minded.

“I tell my boys, it’s our planet,” he said. “it’s like we’re all in the same vehicle, a big bus. If you’re in America, Asia, Europe, we’re all in the same bus;  if our bus has a problem we’re all concerned. If all countries are doing homework for Africa, it means Africa is lazy. Now, we are being responsible”

Africa has a two-century long history of engagement with scientific astronomy, Chetty noted. It also has a longer history of naked-eye human observation of the heavens out of any place on the planet.

It seems like a reasonable foundation to build on.