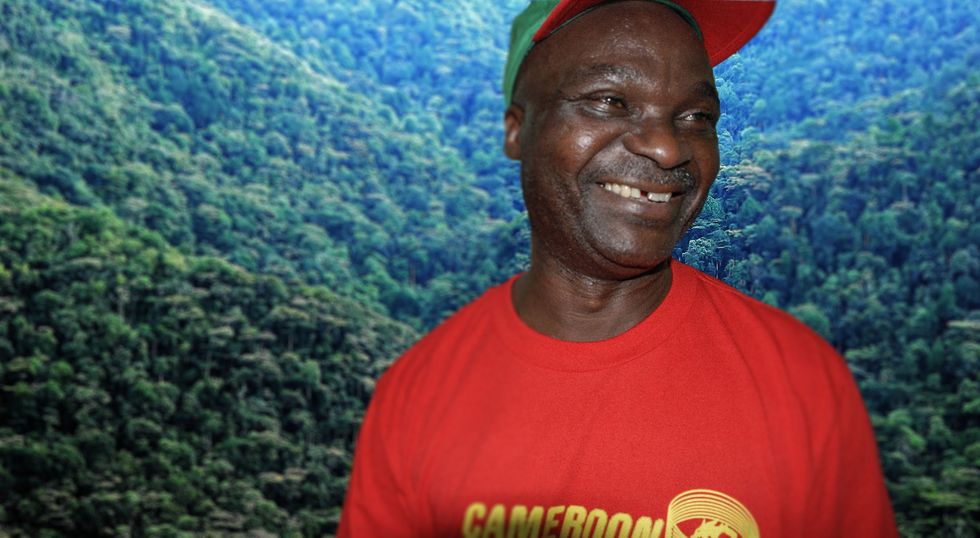 Roger Milla ranks himself as the second greatest African football player of all time after Salif Keïtta and ahead of George Weah.

Albert Miller Roger Milla is an African football legend. In 1990, at the age of 38, the now retired Cameroonian striker led his national team, Les Lions Indomptables, to becoming the first African team to reach the quarterfinals of the World Cup. At 42, he became the oldest goal scorer in FIFA history when he scored against Russia at the 1994 World Cup in the U.S.

Milla is also remembered for his trademark goal celebration dance each time that he scored during the World Cup; he was named by the Confederation of African Football as the best African player of previous 50 years. Now in his sixties, Milla is an avid environmentalist and humanitarian.

In an exclusive interview with Okayafrica, Milla tells us about his life after football and his advocacy work through the Roger Milla Coeur D’Afrique (Heart of Africa) Foundation, and Network of Protected Areas of Central Africa.

Some football fans only know Roger Milla as a legend in the history of African football. Tell us more about yourself. Who is Roger Milla?

My name is Roger Milla but some others call me Miller. I was born in 1952 in Yaoundé but I later moved with my family to Douala, where I started my football career. After I retired from profeesional football, I founded a nonprofit organization for vulnerable children, called Coeur d’Afrique Roger Milla. I am also the ambassador of the Réseau Des Aires Protégées D'Afrique Centrale (Network of Protected Areas of Central Africa).

What are your best football memories?

My greatest memories come from the 1990 World Cup, representing my team Les Lions Indomptables in Italy. We were the first African team to qualify for the quarterfinal in World Cup history. I also keep in my mind the last match of my professional football career against Russia in 1994. Even though we lost that match, I scored a goal even though I was the oldest player of that World Cup. I was 42 years old.

Tell us about your early football career.

Like many others, I started when I was at school in Douala. We used to play in the neighborhood during the holidays. My parents wouldn’t let me play football after school, because I had to help with housework. Sometimes after school I would get home late because I was playing football with my schoolmates and my parents would punish me.

When I was 13 years old, I signed to the local club in Douala playing in second division. My coach trusted me and helped me to improve a lot. I was also playing competitions for my high school. We were doing well. So all that increased my motivation as well as my love of the game of football. From then on, my parents would let me go play. Everyone in the village was proud of me and my family was more respected.

Did you have a dream of becoming a professional football player?

Listen, in those days we did not play to become professionals, we played just for fun. I had no idea that I would become a professional football player at that level. We had no football academies like we do nowadays. As I told you, we would take advantage of the holidays to maximize and improve our skills.

Could you tell us about your journey from the local clubs in Cameroon to the national team selection?

When I was 18, I won the National League with Léopards Douala. Later, I moved to Tonnerre Yaoundé. From there I went to Valenciennes in the French association. If I remember correctly, it was in 1977. It was a new adventure of my professional football life. After, I played for different teams in Ligue 1 in France, including AS Monaco, Bastia, Saint-Étienne and Montpellier.

I don’t remember much about my first selection on the national team, it may have been during the All African Games that took place in Brazzaville or the match against Zaire [the current DRC] in the early 1970s. I was part of the national team that represented my country in the World Cup of 1982 in Spain. Two years later, I was among the 11 Les Lions Indomptables that represented Cameroon in the Olympic Games in Los Angeles. And in 1987, I retired from international football.

In 1990, when Cameroon qualified for the World Cup, I was surprised by receiving a phone call from His Excellency the President of the Republic Paul Biya requesting me to rejoin the national team, and I couldn’t reject his proposal.

You were 38 during the 1990 World Cup and one of the oldest athletes of the competition. How did it feel to compete with the younger players?

As I told you, in our time we played football for fun. [It was the same] when I joined the 1990 World Cup. It’s true that I helped my country to be the first African national team to reach the quarterfinal of the World Cup, but in my mind I went there to play for fun and to make our supporters and other football spectators happy.

I think that I was not alone in having those feelings. The former goalkeeper of Colombia, René Higuita, he played for fun. Unfortunately for him, he was not lucky the day we met as I managed to steal the ball from him and score.

Of course, our match against England will also remain in my memories because we were determined and so close to the semifinal qualification. I remember when Emmanuel Kundé scored an equalizer penalty and the second goal to lead the English. On the team I brought the spirit of courage and as a team we went as far as we could. That was so important to us and our country as well as the African continent.

Who is your favorite team today?

Who’s your favorite coach and player?

My favorite coach is Arsene Wenger. He’s the only coach I have ever seen in my lifetime who has the particular skills of shaping the young talents and form the professional football players. I’ve followed him for almost two decades. He has always had a good team that he grows himself.

My favorite current football player is Lionel Messi. He has all the qualities of a football player and he has such strong skills of how to communicate with his teammates. He is a leader in the game.

Who are your top five favorite football players of all time?

And on African continent, I would name three:

What have you been doing since your retirement from professional football?

I have devoted my life career to the protection of the environment and I have started a foundation, Coeur d’Afrique. I joined forces with Réseau Des Aires Protégées D'Afrique Centrale (Network of Protected Areas of Central African) to advocate for the involvement of the communities around the parks and civil society in the management of protected areas in Central Africa where I am from. I am certain that biodiversity conservation will be a success when local communities and civil societies are involved in the protection of the natural resources around them. That’s why I teamed with that initiative.