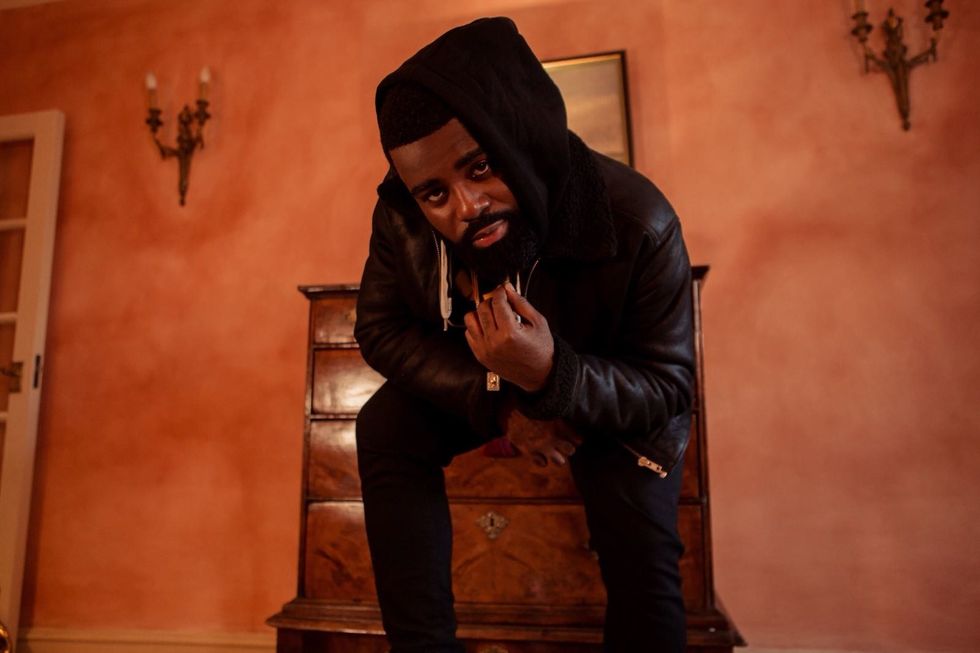 Photo courtesy of Afro B.

Watch it here exclusively on OkayAfrica.

Afro B has finally blessed us with the visuals for his banger (and arguably song of the year), "Drogba (Joanna)," produced by Team Salut.

We're not even that mad we had to wait so patiently for this, since the proud Ivorian was able to drum up incredible momentum for his track through the #DrogbaChallenge, where a crop of videos showing very talented afroebeats dancers grooving to the song spread across social media like wildfire.

The video, shot in multiple locations including New York and Paris, features the artist and a bevy of afrobeats dancers vibing and hitting the shaku, the akwaaba and more as they move along to the songs infectious chorus. The video also highlights some of the viral Drogba Challenge videos from social media, and includes clips of none other than Didier Drogba himself. The rich and vibrant visual was produced by Bruce and directed by Xavier Damase.

Watch it in full below.

Born Ross Bayeto, Afro B was born in South London's Charlton and grew up in Greenwich. He attributes his progressive sound to picking up the keys in his church as a kid, as well as his eclectic music taste he had growing up—which include loving gospel, Pharrell Williams, Elton John, 2Pac and Biggie.

He also was a top DJ before pivoting to music and notes that he had to prove people wrong that this transition was right for him by making top-notch tunes.

While touching base with Afro B during his recent trip to New York, the artist gave us the scoop on how he was able to get Wizkid on the remix for "Drogba." Listen to the track here.

"I was kind of tactical with it," he says. "Wizkid had his AfroRepublik concert at O2 Arena and I performed there when Mr Eazi brought me out—people went crazy. Skales brought me out at One Africa Fest and I realized that Wizkid was in the crowd watching the performance. After the performance, I was receiving videos of Wizkid dancing to my song. Then I thought, 'How can I hit him up indirectly?' So I took to Twitter, mentioned his handle and talked about how when you hear 'Soco, you automatically turn into shaku mode. And he quote tweeted saying, 'Send me the tune—let me fuck it up.' Obviously I sent him the tune within seconds and got his vocals shortly after."

We can anticipate more from the Afrowave pioneer this year. He's set to release an EP soon along with more visuals, produce his own show at the end of the year, as well as a world tour in 2019. "I'm looking to do more international collaborations too," he adds.

Ultimately, he wants to be that positive ray of light in the industry. "I want people to continue to know that it's cool to be African," he concludes. "I want to keep shining the good light on Africa and motivate young people to chase their dreams if they put their minds to it."