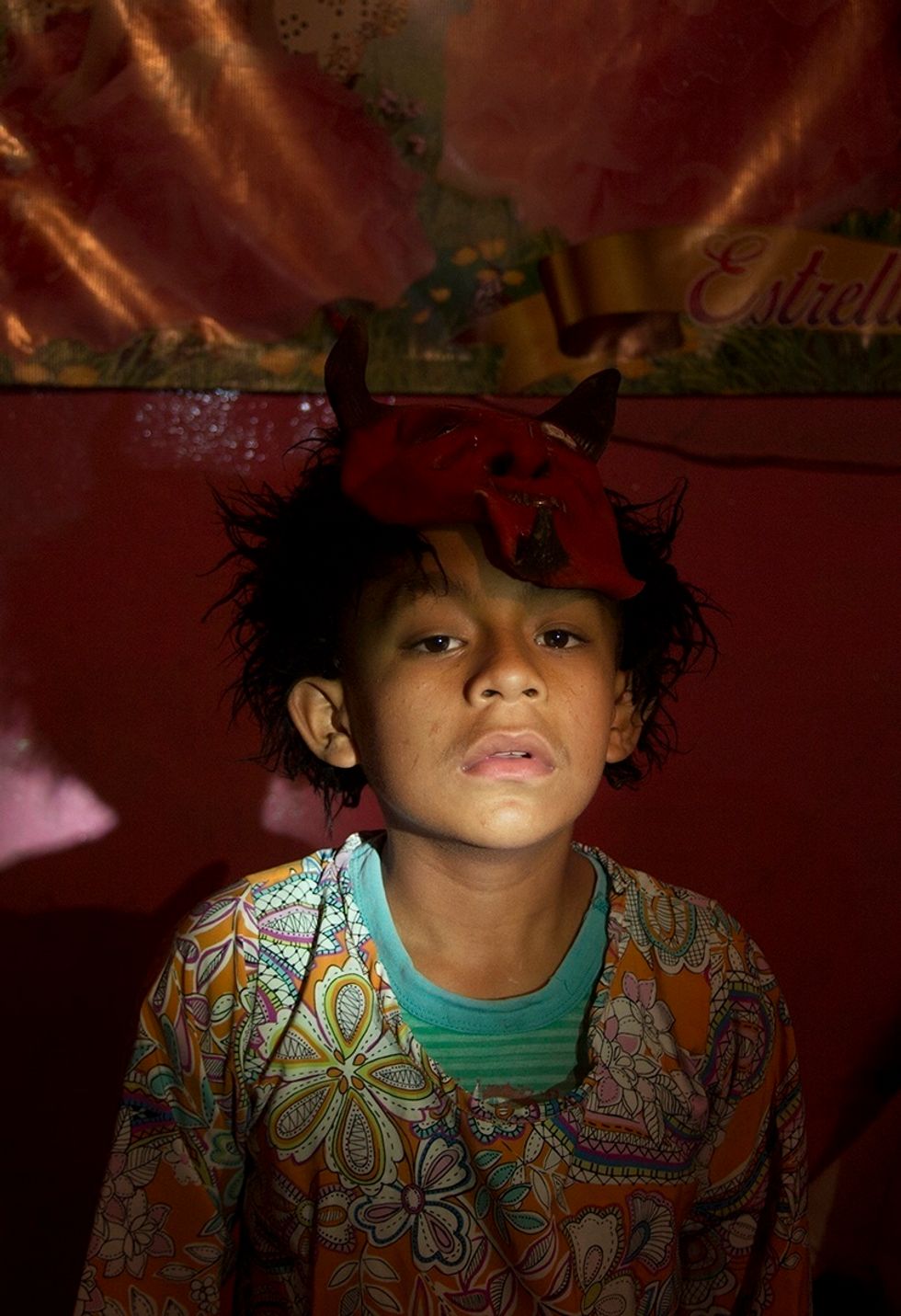 After the loss of her friend 3 years ago, Mexican photographer Koral Carballo retreated to the tiny, out of the way, town of Coyolillo where she hoped to find space for healing and reflection. In the town's living carnival traditions she found inspiration and hope. Coyolillo and it's carnaval is not well known nationally, even less known in the greater Afro-Latino diasporic context, but the town is in the southern coastal state of Vera Cruz, which has one of the highest percentages of Afro-Mexicans in the country.

"I think of my internal struggle and the struggle of this community constantly" says Carballo. "It amazes me how this humiliated and violated community can persevere with such kindness. This town has filled me not only with hope but with strength. It has made me rethink what it means to be free."

Carballo's work "El Misterio del Disfrazado" is the first part of a more extensive project that she has been working on since 2014. In the colourful images we see a person from behind dressed in a floral hooded cape against the backdrop of greenery, a young man's bare back is drizzled with shimmering blue glitter, an intricate floral arrangement adorns a mundane rooftop and a little boy's face peers out from under his carnival masque that sits loosely above his head.

Africans arrived as early as the 1500's in Latin America through force—brought by European colonial powers who exploited them for slave labour. The contribution of African slaves and their descendants permeates the bedrock of these nations but the invaluable contribution of afro-descendants in the region has and continues to be significantly overlooked, systematically smudged and purposely ignored in the history books.

"Africamericanos" is a trans-media exposition encompassing more than 400 historical photos from several archives, in addition to contemporary works by over 70 established artists including a series of projects especially commissioned for the show. The investigation illuminates nuances of afro-descendant's experiences across 16 Latin American nations.

"Historically, in practically every Latin American country, images of people of African descent have been made invisible, dismissed, suppressed and deconstructed" says Claudi Carreras, the show's curator. "Thus, it is essential to reveal and reconstruct the visual map of the African diaspora in this region and to re-examine the stereotypes that encumber this identity."

In "Africamericanos," Carreras finds the equilibrium between honestly examining both the past and present. The exposition addresses the reality of slavery, centuries of injustice and denial but also illuminates the human triumphs, perseverance and invaluable role afro-descendants have played in the construction and identity of these nations.

In Argentinian artist Nicolas Janowski's work, images made with oil and acrylic paint are blended with historical photographs from early 20th century Afro-Argentinean newspapers, as well as phrases and sayings connected to the themes of his work. Janowski's artwork depicts images of Afro-Argentineans whose bodies and faces reflect subtle degrees of visibility, conveying a "barely there image" on a washed out background.

Other minimalist pieces incorporate public statements made by Argentinian leaders in black font on white backgrounds. One example is a quote made as recent as this year by current Argentine president Mauricio Macri who stated "In South America we're all descendants of Europeans" and another relatively recent former president Carlos Menem, stated in 1994, "In Argentina there isn't discrimination because there are no blacks. Brazil has this problem".

"Argentina has always wanted to profess it's European identity, excluding any reference to African roots in the construction of its identity," Janowski tells me. "I started to review the processes of construction of our national identity: denial, whitening of Afro-Argentinean descendants, symbolic extermination, and systematic processes of acculturation of Afro-descendents throughout history".

"Afroargentina" investigates the historical construction of the white gaze on Afro-Argentinians. To research the history he went for courses and seminars with Afro-political activists at Diafar (Diaspora Africana de la Argentina), acknowledging his own privileged position in society and the necessity of honestly subverting his own white male gaze to achieve this work.

The show contains work documenting afro-descendants in Brazil and Cuba—communities that are relatively more well known. There are also works which reflect lesser highlighted experiences of afro-descendants, such as the contemporary queer nightlife scene in Port -Au-Prince, Haiti, as well as black female wet nurses who were made to pose for photos (a custom inherited from slavery) with their aristocratic employer's infants, in the nineteenth century in Lima Peru.

The works which left a lingering impression were by artists from countries whose afro-descendents existence is scarcely known, or regarded, in certain cases overtly systematically denied. These works challenge not solely the status quo but re-adjusts the focus of the lens—potentially provoking a deeper national self-reflection and creating opportunities to dissect centuries old narratives engineered to purge large chunks of a nation's identity in order to propagate a more idealised image of itself.

Mexico first formally recognised its citizens of African descent in a national survey in 2015. For the first time this demographic will be added to the national census as a racial category in 2020.

Carballo, who is herself a Vera Cruz native, is unsure if she has African ancestry, but confesses that she is in the process of researching her family history after an anthropologist pointed out her distinct African features. She notes the legacy of skewed historical narratives, "In Mexico, some of our heroes of our official history such as Jose Maria Morelos and Vicente Guerrero were black, but the pictorial representations turned them into white mestizos. If this happens with our heroes, it makes me think about how much we don't really know (as a country) and how we've been lied to all this time".