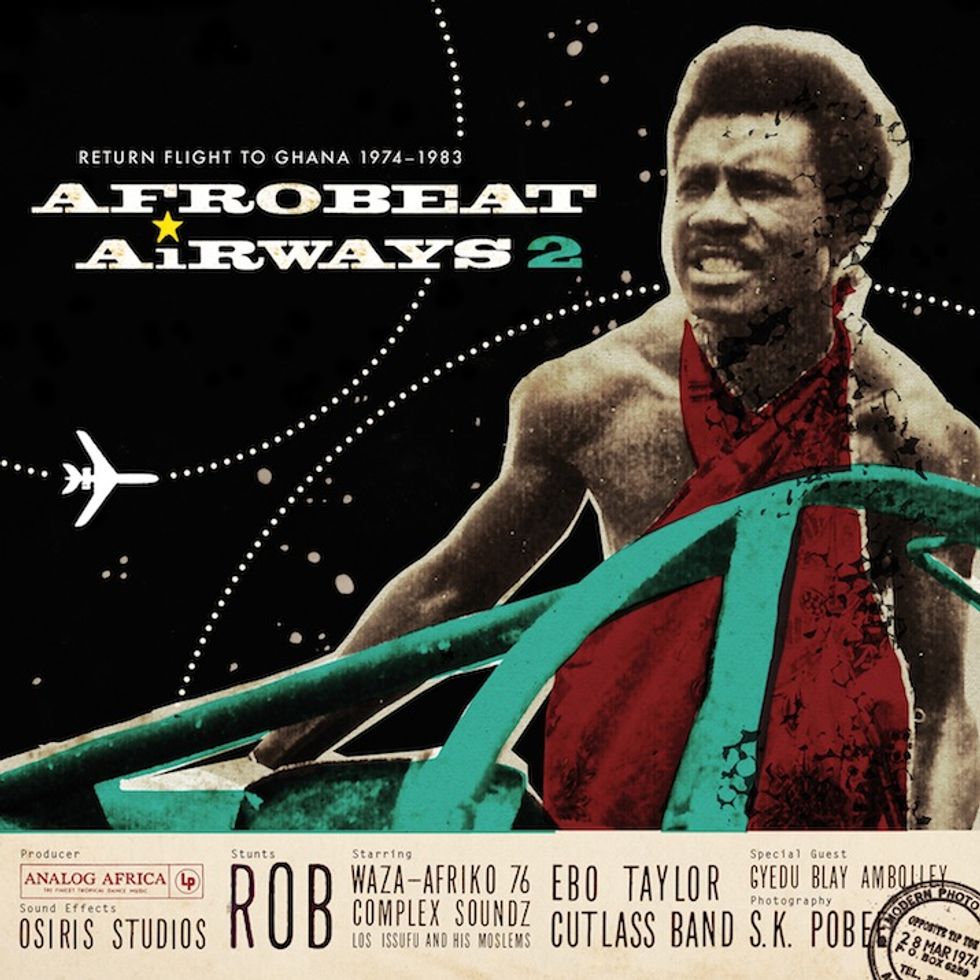 Accra, like Lagos, is a coastal city with a prominent afrobeat community. However, it's not nearly the only city in the West African country where musical roots run deep as evidenced by the 13 tracks that appear on the latest Analog Africa release Afrobeat Airways 2: Return Flight To Ghana 1974-1983 . The label, which is based in Germany, has an inside track to Ghana's music since many of the country's musicians defected to the European nation after political upheaval in the late 1970s.

In mid-70s Ghana, dancing was a central theme worth cutting a song over. De Frank, an extraordinary drummer, is represented in two different groups on the compilation, De Frank's Band and De Frank And His Professionals. The aptly-titled "Do Your Own Thing," from the former band, melds solid organ-based riffs over a strong rhythm section. Possibly inspired by American-based R&B groups like Isaac Hayes and Charles Wright And The Watts 103rd Street Rhythm Band, who each had similarly-titled hits, De Frank's Band urges listeners and potential dancers to clap their hands together and to "do it funky." Similarly, James Brown's brand of funk had an impact on The Cutlass Band, whose syncopated bass riff lends to hip shaking of the highest order; various other instrumental solos ensue from trumpet to sax to flute to organ. The track only clocks in just beyond two and a half minutes, but its insistent groove lingers even longer.

K. Frimpong employs a band with jazzier leanings on "Abrabo" while Complex Sounds add a funky gospel element on "God Is Love" proving that musical tastes were as varied in 70s Ghana as anywhere else.

One of the strong points of this compilation is the essay written by Afropop senior editor Banning Eyre.  With many of the revivalists of the beloved genres afrobeat and highlife including groups such as Antibalas, Souljazz Orchestra, Karl Hector and the Malcouns, and Black Market Brass, the historical cultural impact imposed upon the music is often not fully understood to the uninitiated listener. Liner notes, an almost forgotten artform, may not feel as necessary for a familiar genre, but when a listener decides to expand his musical horizons, the need for such a companion guide is paramount.

So it stands out when Eyre delves into topics such as the producer of The Cutlass Band thinking that Kumasi artists have more talent than their brothers in Accra, the nation's capital, and then exploring the topic based on a group of Akan languages potentially being a factor in marketability. Or when he notes that political messages embedded into songs, a cornerstone of cementing the legacy of Nigerian Fela Kuti, would flop commercially in their homeland.  Those are only a couple of examples laid out amongst 40+ pages of liner notes that accompany a multitude of rare photographs, one of which can be viewed below.

Uppers International pose outside in and around their tour bus.

Afrobeat Airways 2: Return Flight To Ghana 1974-1983 is now available in CD and vinyl formats with a digital release scheduled for next week.