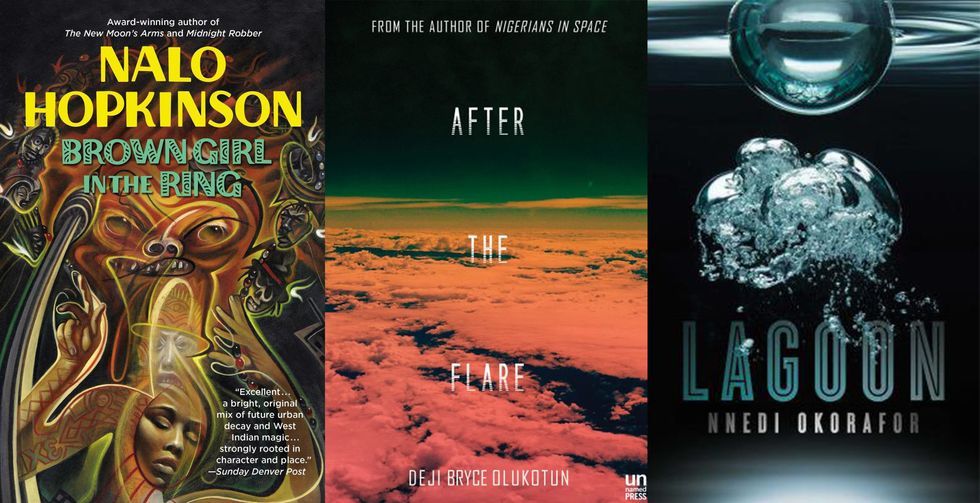 We decided to give the industry a head start on which Afrofuturist film adaptations should go into production and who to hire. You're welcome.

African and diaspora writers have been producing excellent fantasy and sci-fi for a long while now. Great authors like Octavia Butler and Nnedi Okorafor have been churning out good reads for years, and it is mind boggling how many novels written by such talent are yet to be adapted into films, like many of the works of their white counterparts.

Riveting titles like An Unkindness of Ghosts by Rivers Solomon, and The Galaxy Game by Karen Lord, have made their mark in the genres of fantasy and sci-fi even beyond the genre of Afrofuturism. Black Panther is hopefully just the beginning of futuristic stories that center Africans. Its success is a huge indication that people are ready for more—and have been ready for a long time.

Our list of Afrofuturist books that should be made into films and the talents we think should star in them is not only an exercise of using our imaginations, but also a subtle nudge to the artists we know can handle the projects.

For years, this classic has been read by the masses, its influential pages have been brought into school districts across the states, and copied by other storytellers throughout film and TV. Kindred tells the story of African American writer Dana, who is sucked back in time to a Maryland plantation before the Civil War. As Dana travels back and forth, readers are able to get an in depth exploration through slavery and its effects, while also becoming addicted to finding how Dana navigates her colliding worlds while also trying to ensure her existence in the future.

With that said, who better to play Dana than actress Condola Rashad?

Rashad is known for her amazing performances on broadway. She is the youngest actress to have received four Tony awards. She takes after her Queen mother, Phylicia Rashad so honestly, there's no surprise. If you catch her in the Showtime series, Billions, you will see she plays a character very similar to Dana. Although her character in Billions is more mischievous than Dana, Rashad carries a softness to her and a personality to fall in love with.

2. Brown Girl In the Ring by Nalo Hopkins

Although Caribbean-Canadian filmmaker Sharon Lewis created the prequel to this title with her directorial debut, Brown Girl Begins, she set the stage for the next film which would be Brown Girl In The Ring. Hopkins created a fantastical dystopian world where we meet the unfortunate impoverished residents of Toronto who are ruled by a drug lord. Ti-Jeanne and her grandmother rise as leaders of their people with the help of spiritual magic to save their people from complete moral destruction.

We've already seen Black-Canadian actress, Mouna Traoré perfectly embody Ti-Jeanne,Measha Brueggergosman as Mama Ache, and Emmanuel Kabongo as Tony, so we'll just leave the OGs alone. However, we can fantasize about Nigerian-British Actor Hakeem Kae-Kazim as drug-dealer Rudy Sheldon. Best known for his roles in Black Sails, Hotel Rwanda, and Pirates of the Caribbean, Kazim can be cunning, intimidating, and strangely difficult to hate even when playing a villain.

This African folklore fantasy novel tells the intertwining stories of an alien ambassador, Ayodele, and three human protagonists. The protagonists, Adaora, a marine biologist, Nigerian soldier Agu, and Ghanaian hip-hop artist Anthony, each have different encounters with Ayodele as events unfold in the novel's riveting three-act structure. When Earth comes in contact with an alien fleet, violence ensues before the establishment of a post-capitalist Nigeria governed by aliens and their human subjects. Yet in all of the chaos, we discover each of the protagonists have supernatural abilities. If made into a film, this production would likely fall under big-budget blockbuster, and we've got just the right people in mind to do it the right way.

Zoe can play a sweet, independent, and perceptive genius–traits of Adaora. Besides, she already has experience in the dystopian/sci-fi genre from starring in the adapted Divergent series. After the upcoming realistic sci-fi action film, Kin, she'll be especially down for this role.

Nigerian actor, Okeniyi has been incognito for way too long. He is most known for playing the fierce yet compassionate warrior-survivalist, Thresh, in The Hunger Games. He is definitely equipped to play the superhuman Nigerian soldier.

Think Game of Thrones but with the diversity everyone wishes existed a bit more. The Hundred Thousand Kingdoms is a fantastical story about heiress, Yeine Darr, whose seat on the throne is compromised by her two cousins. Darr must face her opposition and the powerful enslaved gods they wield, all while solving her mother's abrupt murder. Luckily, this novel is the first installment of The Inheritance Trilogy, so the journey is not cramped into just one book. With that said, we wouldn't be upset if the series expanded into three films either.

After following Darr's story, it is hard to imagine anyone else but British-Guyanese actress, Letitia Wright, to star as Darr. We think its time to see her actively siege a throne.

For kicks, we highly suggest Ghanaian-British director, Amma Asante to direct this film, and master of drama, Shonda Rhimes to join the project. Asante is known for period pieces that tell the stories of black women who have been outcast by their families and communities, and Rhimes, who also has experience with period pieces. They're a perfect match.

5. My Soul To Keep by Tananarive Due

My Soul To Keep is a beautiful, scary, thrilling, supernatural love story– a must read. This first installment from Due's African Immortals trilogy tells the story of Jessica, a mother, and unbeknown to her, wife of an immortal being named David. When people closest to her become victims of murder, the veil over her normal world is torn down when she finds her very soul is at stake.

We think How to Get Away With Murder, and The Birth of A Nation's, Aja Naomi King would make a great Jessica. She would effectively play a strong-willed, compassionate woman, and it would be nice to see her star as a lead in an action, horror film.

6. After The Flare by Deji Bryce Olukotun

After the Flare is the second installment to Olukotun's series. After you read the first title, Nigerians in Space, and move on to this second novel, you'll see why we highlighted this book as something that needs to get the green-light. This juicy, political thriller, is set in a dystopian future where an enormous solar flare crashes on Earth and disseminates most of the world's access to technology. The Nigerian Space Program's mission to getting a stranded astronaut back home seems impossible when its bickering, ambitious crew members discover an ancient artifact on site, which then summons supernatural forces. In the midst of the chaos, the terrorist extremist group, Boko Haram are on the move to obtaining the station's inventory. After the Flare explores space exploration, religion, and identity, and gives an interesting perspective on the fall of our current government.

We shook up our 8-ball and concluded that protagonist, Kwesi Bracket absolutely has to be played by Tobagonian actor, Winston Duke. I think we can all agree that after Black Panther, he needs his own film, and seeing him in a three film installment as a hero would be quite satisfying.

Zubaydah Bashir is a filmmaker and writer from South Orange, NJ. Follow her on Instagram @zu_thecute and visit her website to indulge in her blog and find out about her latest film and tv projects.