Afropreneurs: Meet Aina Fadina, The Creative Force Behind ‘I Of Africa’ Web Series 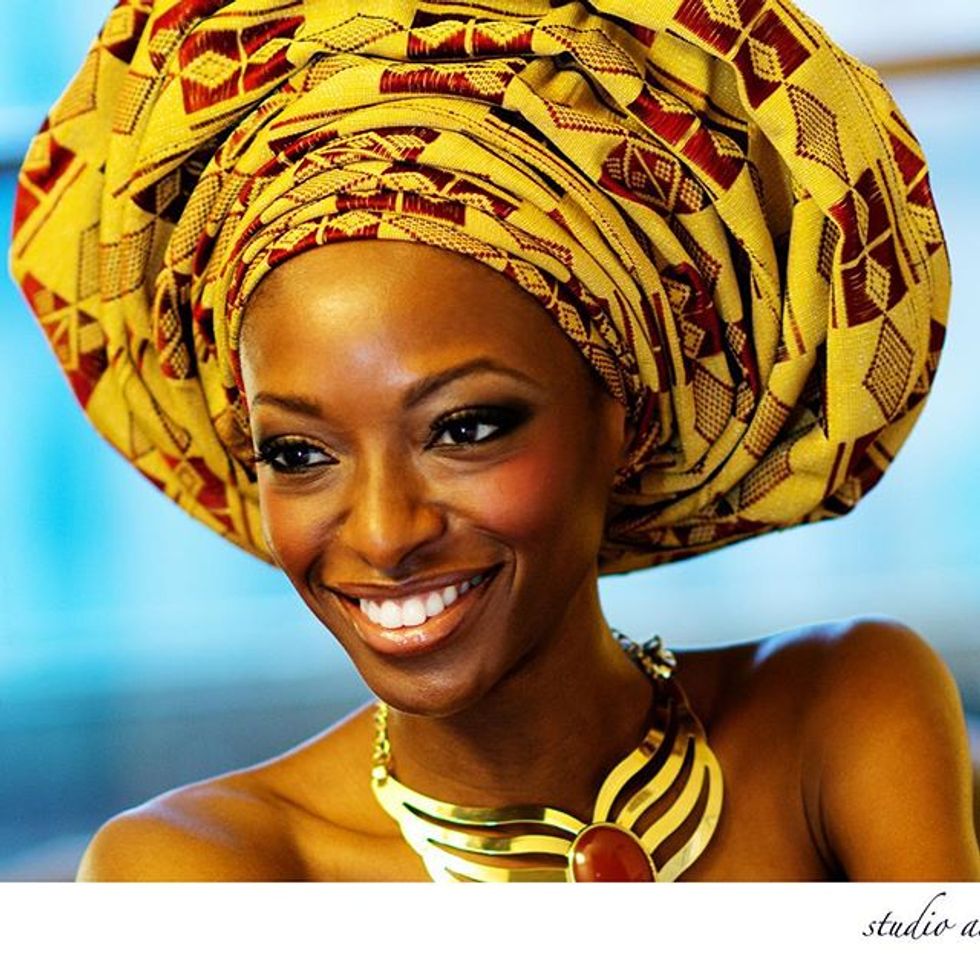 Okayafrica caught up with Fadina to learn more about her beginnings in Lagos, Nigeria, her concept for 'IOA' as well as her vision for the future.

Our new regular series, ‘Afropreneurs,’ gives our team here at Okayafrica the opportunity to bring to the fore the faces and minds of the brilliant entrepreneurs powering Africa's most innovative and creative brands, challenging the status quo and trite narratives that abound about the African continent while simultaneously transforming its landscape for the better. In this first edition, we spoke with high fashion model Aina Fadina, Nigerian-American creator, executive-producer and host of web series I Of Africa now in its third season.

Last week we told you a bit about web series I Of Africa now in it’s third season.

It’s the creation of high fashion model-turned-entrepreneur Aina Fadina. She developed IOA in 2013, financing its production almost exclusively from her pocketbook, because “when I looked at original content that's related to Africa, I realized that no one was telling African's stories through my perspective,” Fadina says. And that perspective, if you will, is for Africans, by Africans. You won’t see an old white man or a blonde helming this show.

Season three, which premiered July 7 on its YouTube channel, sees Fadina as the captain of her own ship—she hosts and executive-produces the series. An avid world traveler spending 40 percent of her time overseas,  Fadina jetsets to cosmopolitan cities such as Lagos, NYC, Cape Town, Paris, and London to hang with African cultural provocateurs such as Blitz The Ambassador (who kicks off the first episode), Laolu Senbanjo, Marcus Samuelsson, the cast of Broadway breakout play Eclipsed in this season to learn more about their crafts.

It’s all quite a feat for Fadina who continues to model as she's done for eleven years with fashion houses such as Oscar De La Renta, Alexander McQueen, Versace and Fendi. She’s also busy promoting the web series and closing business deals—if you flew on South African Airways in June, then you were treated to an episode. Fadina is also in negotiation to have her series featured on a major U.S. airline. It’s all a labor of love fueled on pure, unadulterated passion. That’s the only way she could do it all.

I caught up with Aina at a humming tea shop in Manhattan to learn more about her beginnings in Lagos, Nigeria, her concept for IOA as well as her opinion of the viral phrase "Black girl magic." This interview has been edited and condensed.

Erin C.J. Robertson for Okayafrica:  Who is Aina Fadina?

Aina Fadina: That's an interesting question, just because I think there's identity aspects of who I am as a person. Obviously I'm Yoruba, I'm Nigerian, I'm West African, I am African, I am black, I'm American (laughs).

Omo oduduwa, omo Yoruba ni mi, Ati omo Sola Ati Deji Fadina. Oldie, but a good one. Shout out to all the women, who go through the gele drama every weekend. ? by @ade.adetayo #bellanaijawedding #naijagirl #africanqueen #ownyourthrone #nigeria #yoruba

Would you say you're a model first or an entrepreneur first?

It depends what day of the week it is. It depends on if I'm going to a casting. It depends on if I'm sitting down here talking to you. I think as a model I am an entrepreneur as well too, because I am a brand that I'm selling. I have to keep track of my payments. I have to keep track of who my brand is, I have to show up to work on time. I have clients that I work for, I have agents that I work for. There are all these different facets. I think as a model you are an entrepreneur, and I think that's a misconception.

As a model, you're very much an entrepreneur. Absolutely.

What's your background? How has that background helped you in creating your web series I Of Africa?

I was born in Lagos, Nigeria. I spent a lot of my childhood in Lagos State, which is where my parents are from. [I] traveled every summer to London and summer holidays with my family as well, too. I grew up always with the sense of there's a lot more to this world than the bubble that you're in, and I was exposed to a lot from a very young age as well, too. My dad was the assistant director of finance and systems director for Nigeria in the '80s, he also had a tractor, he was really into agriculture. My mom had six kids, had an amazing career, my grandmother had ten kids and had a phenomenal career, my other grandmother had five kids and had a phenomenal career. There was no notion about oh, you're a woman so you can't do x, y, and z. That narrative was just not in my household. We were kind of forward thinkers (chuckles).

It was very helpful because when I looked at original content that's related to Africa, I realized that no one was telling African's stories through my perspective. It was the same thing as when you look at fashion. It's the same creative process that I saw designers take when they were creating collections every season, so that gave me to acquire that into the content that I created. That inspired me to create the content, and I also felt it was important for that person to be African but with a global context.

The world is getting very used to old white man or a blonde girl telling an African story, because we're comfortable with that image, but why isn't the world comfortable with a black woman that happens to be African that happens to be a model, telling the stories of Africa? I wanted to change the perception, the expectations, and also the context and the image of what Africa is.

Take one step at a time towards your goals, focus on the goals, adjust the wavy path, and celebrate your story. #mondaymotivation #mondaymantra #whogonstopme #watchthethrone #tlop. This is the year of #kanyewest inspiration. Side note, can summer please come, I need more #melanin in my life ? by @sivan_miller on the streets of @capetown

Where did your zeal for storytelling come from, and how has your Yoruba background influenced your style of narration?

Growing up with my grandfather, storytelling is how we pass on our history. There are proverbs that people would say and those proverbs were so meaningful and so deep. That was part of passing time with your family members. Being Yoruba is very much about oration, about how family history is being passed on. A lot of things were not written down, because that's how we engage the Yoruba style of communication, we tell stories, you create ideas in your head. I can only speak for what I know, because I'm Yoruba. In the Yoruba tribe, Yoruba culture, Yoruba tradition.

Why is it important for Africans to tell stories for and by Africans?

Why are white stories being told by white people and not black people? Why don't we question that? Who controls the narrative in media? Who controls the image and the perception of what the world gets to see? It's not us.

That's why it was important for me to tell my agenda from my perspective. I did not see anyone telling African stories that looked like me, to be honest. I had all these amazing friends in New York doing really interesting things, but I didn't see their faces in the media, and I was like why isn't this being done? I'm like, okay, there's a problem, so why not create a solution?

What advice do you have for south Africans who want to pursue modeling or acting? What's your insight?

I'd have to say a good support system. I'm extremely lucky that I have several best friends. I'm extremely close with my family. I have that from that angle. Also, self confidence or no one is going to know where you're coming from or your ideas. You will have to create a space mentally take care of yourself, emotionally, physically and just know you're going to have to give up something. You're willing to pay the price. Just believe in yourself. It's all about you.

You have the power within you to get what you want and where you want to get to in life.

What do you have to say to your critics?

You wake up every day, you go to work as a model, and you use the same funds that you made as a model to [finance] a business, then we can have a conversation. I think we all can criticize people, but you have to be mindful, you don't know what that person gave up to make that happen. As a model, I'll put in 15 castings in one day, I may not get one job. So, the production value's not what it is, why are you the face of it, why don't you just focus on the people...They can make their own content. It's very easy for you to have an opinion about something, but until you walk a mile in that person's shoes, you can save it. You're not my consumer.

What do you think of when you hear the phrase "Black girl magic"?

That's a trick question. If you asked me this 10 years ago, I wouldn't understand.Why do you need the affirmation that black girls are magic? But the older you get living life as a black girl or black woman, you realize that some people didn't get that affirmation at home, and society sometimes doesn't understand what that means. And they don't understand the psychological shift you have to make every day you go out of the house. It's an affirmation, and I think young girls need to hear that. And the world needs to get that. And that's why for me, everyone needs to understand that black girls are magic.