Afropreneurs: This Company Is Bringing Luxury African Fashion Under One Roof Online

For 26-year-old health and safety expert turned tech entrepreneur Chekwas Okafor, fashion is a family business. “To a certain extent, I’ve always been running away from fashion,” he explains. “When I was younger, my father imported textiles from China. At the time, I didn’t want to get into the business, which I didn’t think of as fashion—just as something that paid the bills.”

As a biology student at Voorhees College, a historically black institution in South Carolina, Okafor chose practicality over passion. Although his well-tailored, bespoke suits garnered the attention of classmates and led to a short stint in modeling, he cast aside the idea of a career in fashion until a friend introduced him to the work of up-and-coming Nigerian designers.

“I began to wonder about how the fashion industry at home was changing, and how I could leverage that growth to expand opportunities,” he says. “I spent the next two years learning more about the industry, and diving into the world of luxury.” 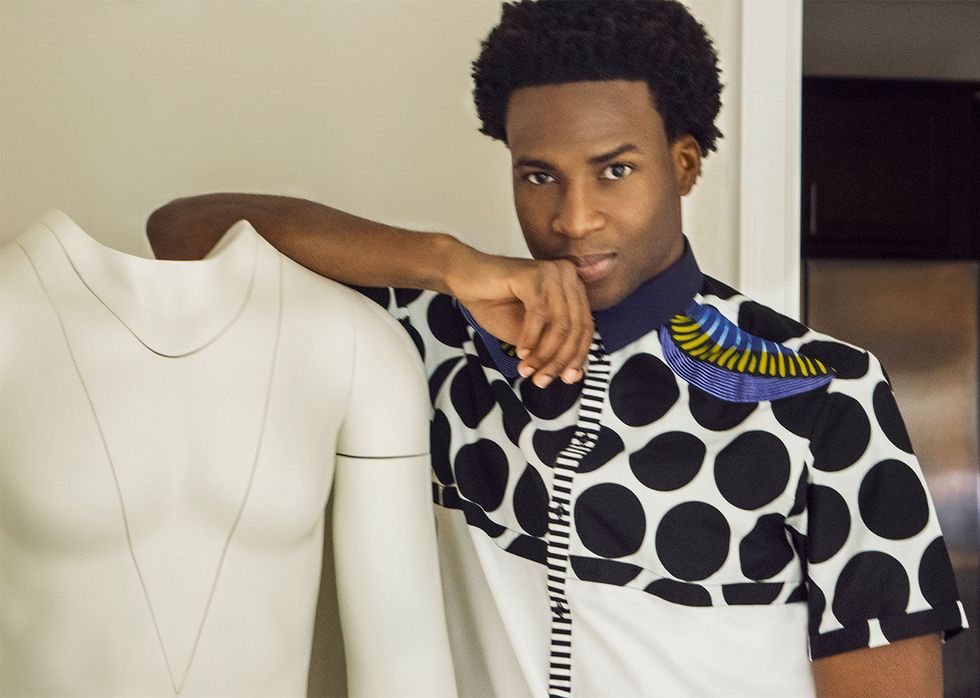 Okafor’s newly launched e-commerce website, ONYCHEK, is the result of that intensive research period. The site, which stocks a range of clothing and accessories for men and women, aims to foster job creation and cultural preservation in Africa through fashion.

But developing relationships with designers hasn’t been easy. As a new concept, ONYCHEK initially struggled to bring designers on board. Designers protective of their brands were initially hesitant to collaborate, so Okafor adopted a guerrilla approach to making a pitch.

“Because I prefer to show instead of just tell, I bought products from all the prospective brands I was targeting,” he says. “I made an editorial with high-quality images and a mock-up of the company and the website. Based on that, some of them reached out because they were able to visualize what I was building.”

ONYCHEK, which now stocks seven brands including Kenya’s Adele Dejak and South Africa’s MaXhosa by Laduma, focuses exclusively on brands based in Africa. “There are many African designers based in the diaspora who make their products around the world because the continent’s fashion infrastructure is still underdeveloped,” he explains. “However, our focus is on companies that maximize value addition in the region by boosting employment of local suppliers, craftsmen, and manufacturers.”

In 2017, Okafor hopes to expand ONYCHEK’s offerings and has his eye on leading designers like Deola Sagoe and Lisa Folawiyo, favorites among Nigeria’s jet setting elite.

African luxury may be a foreign concept to a fashion industry dominated by western brands, but ONYCHEK hopes to educate consumers on Africa’s diverse cultures and the history behind textiles from batik to adire and imigwegwe through its “African Fashion Dictionary.” The site’s blog, THEINSIGHT, walks customers through traditions around head attire to the new attempts to repurpose the sacred Ankole cow horn.

Through ONYCHEK, Okafor aims to offer consumers something more than just click-to-buy. Through its products, editorials, and social media, the platform hopes to inspire a wave of conscious consumption that inspires consumers to consider the origins of their clothing and accessories.

“In the same way, consumers look to France or Italy for high-quality goods,” Okafor tells OkayAfrica, “I hope they begin to look to Africa.”

Félicity Ben Rejeb Price represents a new generation of imagery in Afro-French hip-hop culture, with clients including top French acts like Dadju, Aya Nakamura, Gims, Niska, SCH and Soolking. She also has a growing catalogue of editorial campaigns for the likes of Adidas, Uber and Converse.

Her current role is a combination of everything she's done so far. A jack of many trades, she's played her hand as an interior decorator, publicist, set designer, stylist, casting director, photographer, and ultimately, artistic director. The detail-oriented Félicity relishes at being able to select the location, models, styling, and the method of filming for her projects.

Félicity dominates a masculine industry with illustrations that go beyond the typical rap video starter pack—comprised of cars, scantily-clad women, alcohol, and money. Her formula is: film music videos that are mini-films where women such as herself are treated as equals rather than objectified, while also sprinkling in a number of lights and colors.

It's Saturday afternoon in Arizona, where Félicity is shooting a new music video. She pauses to speak with us on the phone about the trajectory of her career.

The article below has been edited and condensed for clarity.