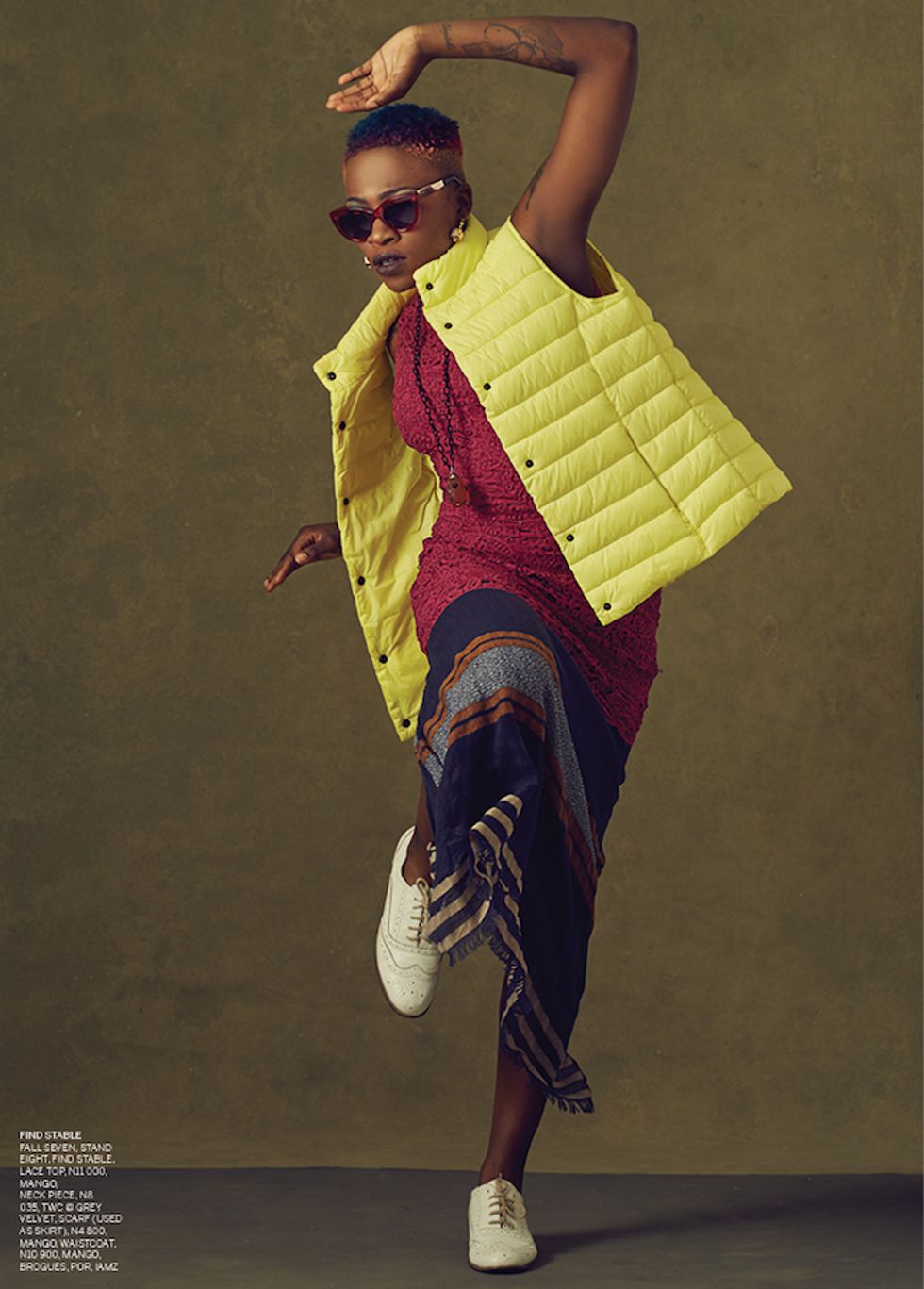 London-based Nigerian MC Aina More stuns in this new fashion editorial for MANIA magazine shot during her visit to Lagos.

Aina More is killing it. The London-based Nigerian MC—who turned heads earlier this year with her ode to fly girls—recently embarked on a trip to Lagos, where she opened Lauryn Hill’s first ever Nigerian concert.

In Lagos, the rapper also shot an editorial fashion spread for MANIA magazine inspired by her For People With Short Attention Spans EP. Check out the photos, shot in Lagos by Obi Somto and style directed by Godson Ukaegbe, above. Below, we spoke with Aina More about the influence fashion plays in her art.

Okayafrica: How would you describe your style?

Aina More: My style is very bold. Growing up I used to have to wear clothes I didn't want to, including a lot of hand-me-downs and charity clothes. My mum would always have to be the one to buy the flamboyant clothes that were never “in.” The confidence in how I would wear them then was a cover-up of the fact I never felt like I owned them and ultimately didn't want people to know.

The great thing is this has translated into how I wear my clothes now. Now, I dress according to how I feel and I dress with confidence. I simply can't care what people think and it reflects in my style. My style is very edgy, very bold and usually rather African inspired.

What role do you see fashion playing in your music?

I think the music is changing the way I see fashion and I'm very happy about that because I never really used to have a regard for fashion. I believed clothes just kept you warm and it didn't really matter what you wore (to an extent I still believe that). However, now, the more I delve into themes in the music the more it translates in the way I perceive style and ultimately now I pay more attention to fashion.

In my unreleased video “Afrikan Lady” you see me embrace a variety of styles and this is because I understand that people see a story and perception when they see the way you dress.

People see a man in a suit and might think ”he's about his business," or a woman in a head wrap, “oh she's probably vegetarian" It's made me realise that you should never dress for external opinions and likewise never make music for the sake of others’ opinions. I believe one should wear what they want how they want and that's why sometimes you'll see me dressed to impress and sometimes—like in the "Layback" video—you'll see me in full nude. I'm learning that the most important thing in fashion and in music is to be authentic to yourself. I've found I've looked my best when I've dressed according to how I feel, or want to feel.

I realise that fashion makes statements and so I'm taking my fashion now to be a story in itself.

What were you doing in Lagos?

I came to Lagos to perform series of LIVE shows as a follow-up to the crazy love “Girls Killing It” was having in Lagos. I performed at the platform Loud'N'Proud LIVE followed by opening for Ms. Lauryn Hill at her first ever show in Nigeria.

How would you describe the fashion scene in Lagos? Compared to London?

Lagosians—scratch that—Nigerians are always dressed to impress. Even the okada (motorbike) driver will floss in blinging shades. Nigerians are generally very proud people and it reflects in their fashion sense. Everyone's style is influenced very differently so you'll see a variety of style from the vintage, American-influenced style to the classic male & female traditional West African styles.

Ultimately though, it's guaranteed that wherever you go in Lagos you're likely to come across a self proclaimed fashionista who prides in looking fresh from head to toe. I've found in London the style is a lot more casual and laid back. In London we can turn house slippers into a look, Lagosians will ask you why you're wearing house slippers out.

How have Nigerian or African artists influenced your music? Which artists in particular?

It might be the go to answer for many, but I've personally been very heavily influenced by Fela Kuti. It’s no coincidence that as I'm writing this response “Coffin for Head of State” is on in the background.

A lot of my earlier work including It's A W.R.A.P. (Words, Rhymes And Poetry) was written on topics mainly related to Nigerian political climate and I may not have realised I could go that deep with music without his influence.

After meeting with Dele Sosimi (former keyboard player and musical director for Fela Kuti's Egypt 80 & Femi Kuti's Positive Force) a lot of my sense of direction came back to me full force—both in terms of sound and in the content. Now you'll hear a lot more of an African influence in my music because how my music sounds live is more important now than ever. I started to consider the musical trance and spiritual side of sound (thank you Fela).

Content-wise, I now have more conviction about the need to speak up in the music more as you'll hear in “Afrikan Lady.” I want people to enjoy—yes, but that all means nothing if I can't speak for my people at the same time.